A roll of duct tape (and a friendly park ranger) save the day. 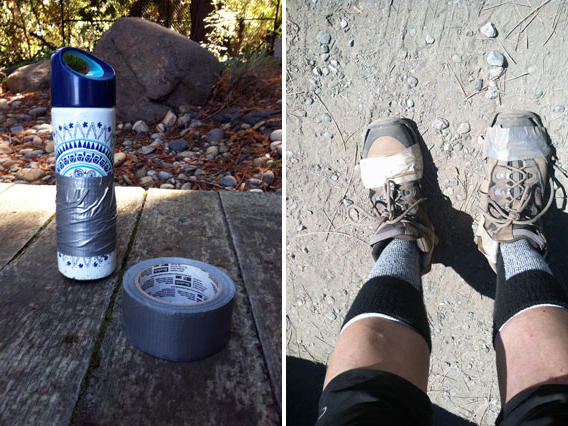 Those who know me, know that I am thrifty. I still rock t-shirts from college, shorts from high school, and sunglasses from the 1980s. (No, they’re not vintage. They’re just old.) But I really outdo myself in the shoe department. From sneakers to slippers, high heels to high tops, I wear my shoes until they fall apart. Before last weekend, however, that had never happened in the woods.

I was camping with friends in gorgeous Henry Coe State Park, it was Saturday, and we’d embarked upon an ambitious 7-mile day hike. Around the one-mile mark, I looked down at my trusty hiking boots (purchase date: circa 1995). To my dismay, I realized that the separation between the body and the sole of the boot–which I had taken for a mere hairline fracture–was, in fact, a fault line more akin to the San Andreas. I’m no boot expert, but even I could see that, in the very near future, the entire sole would simply shear off of the boot. Close inspection revealed that the other boot would follow close behind.

“Did you bring tennis shoes?” my friend asked.

“Nope,” I answered. “Just these and my flip-flops.”

After another two miles, the inevitable occurred: the soles fell clean off the boots. I dragged my feet along the path to keep the sole between my stockinged foot and the ground.

At lunch, I embraced my inner MacGyver, using medical tape from my first-aid kit to cobble my boots back together. Miraculously, this fix held for (nearly) the rest of the hike.

After ending the hike with another half-mile of foot dragging, I poked my head into the park visitor center. The shelves were lined with all manner of helpful things: maps, matches, flashlights, extra batteries. Surely these forward-thinking folks would carry some sort of adhesive material…right?

“Excuse me,” I asked the Ranger On Duty, “Do you guys carry Gorilla Glue?”

Seeing his confusion, I gestured down, toward my ancient, battered boots. Half-amused, half-horrified, the ranger took pity on me.

“Hold on a second,” he said, and disappeared into an office.

Moments later, he reappeared with a roll of duct tape.

“I always take this on the trail with me,” he said. “Fixes anything.”

I sat down and went to work on my shoes, wrapping the toes generously with tape, taping all the way along the sides, and finishing up by pressing layers and layers of tape on each heel. I thanked the ranger profusely.

“Word to the wise,” he said, “Stick some duct tape on your water bottle. That way, you’ll always have it with you on the trail.” (He held up his very taped-up Nalgene as an example.)

With a nod and a wave, I headed back to my campsite.

The best part? My boots held for the rest of the weekend. And that’s how duct tape saved my sole.

Want more hiking and camping tips? Check out our videos.