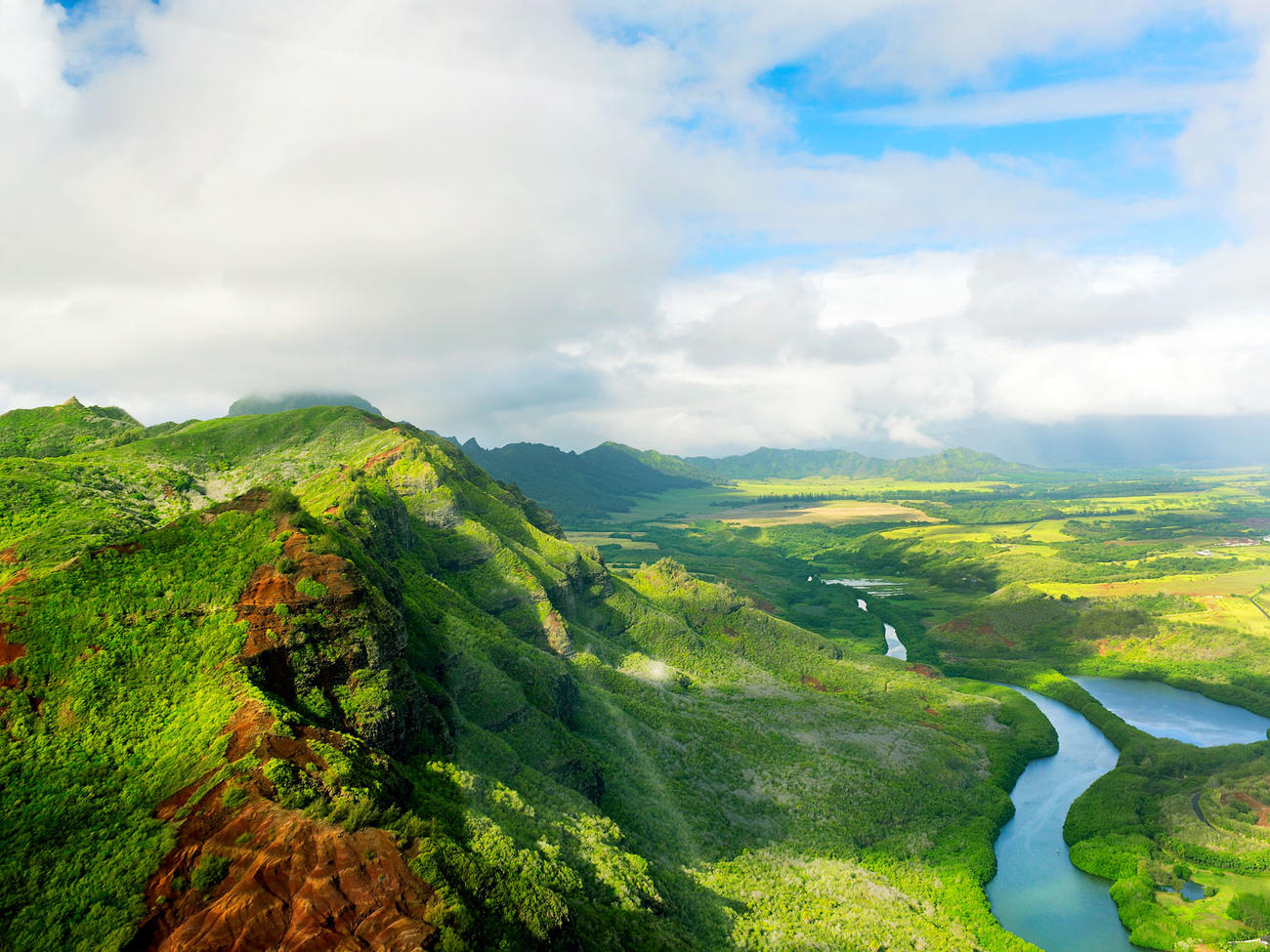 Alberto is practically a fish. He grew up swimming the Mediterranean in the south of Spain. But while Alberto has lived in San Francisco for 30 years, he had never been to Hawaii. Talk about a missed opportunity: I knew this merman would love Hawaii.

I wanted Alberto to love his first trip to Hawaii. We had been together for less than a year. Bobbing in Hanalei Bay, I wanted to show him, and maybe myself, that I was up for any adventure together. I chose Kauai as Alberto’s introduction to Hawaii for good reasons. I know the island well enough to play tour guide. I knew he’d have lots of opportunities to enjoy the ocean he loves. And I also thought this one island could give him a full Hawaiian experience. Kauai is exactly what people picture when they imagine Hawaii—jungles, waterfalls, cliffs dropping down to turquoise ocean.

I planned four days at a condo in Po‘ipu, on the island’s dry south side, and three days at the St. Regis in lush Princeville, on the northern shore. We would save money the first half of the trip, then splurge the second. Snorkeling reared its head the minute we checked into the condo. Po‘ipu Beach was a short walk away, and Alberto took me over to check out the rental snorkel gear: $10 for 2 hours.

“Maybe tomorrow,” I said. “Let’s have a drink at the Grand Hyatt.” We had our first mai tais and watched the sunset slip into the ocean from the Seaview Terrace—a perfect vision of Hawaii.

The next day I suggested a hike in Waimea Canyon. “It’s like a mini, mini Grand Canyon,” I told Alberto, hoping to put off snorkeling for another day. We drove west on the Kaumuali‘i Highway, stopping for sweet-potato fries and Napali Pale Ale at the Waimea Brewing Company. The scenic but arid red-earth countryside took Alberto by surprise. I knew he craved water, so we headed back to Po‘ipu Beach in the afternoon.

Alberto was happy to be in the ocean at last, but he was also perceptive. “You don’t have to go in if you don’t want to,” he said. That only made me more determined to get over my fears. But not right away. Timid in the water, I’m fearless in the air. The next day, we took a helicopter tour. We flew with Island Helicopters, the only outfitter with a permit to stop at otherwise inaccessible Manawaiopuna Falls, seen in Jurassic Park. The views of the Na Pali Coast, dolphin spotting, and the hike to the falls were unforgettable. I could tell Alberto was coming to like Kauai.

The Na Pali Coast offers one of the most gorgeous views on the island.

When it came time for the splurge half of our vacation, the St. Regis is Princeville did not disappoint. Where to begin? The cucumber-ginger margaritas served by the infinity pool. The butler that comes with your ocean-view suite. We had dinner at the hotel’s Kauai Grill, where chef Jean-Georges Vongerichten has brought the intense flavor contrasts he’s known for in New York and Las Vegas to the Islands. It was a good choice. Alberto was warming to Kauai. But, a serious food-fan, he hadn’t been impressed by Hawaiian cuisine. Vongerichten’s sophisticated black-pepper octopus was just the kind of seafood my Spaniard was craving. Our vacation was drawing to a close. I knew it was time to share the beauty of the ocean with Alberto. I had to go snorkeling.

We met with Paul Clark, the St. Regis’s marine biologist, who would guide us as we snorkeled in Hanalei Bay. He began with a 20-minute tutorial on the coral and fish we would be seeing. Somehow, it made me want to get into the water. The three of us donned our gear and I slipped into the Pacific as if I did this every week. Swimming behind Paul, we glided through an underwater valley between reefs. As we spied barracudas, rays, and brightly colored schools of parrotfish, I tried to forget where I was—underwater.

We swam further out, following a teasing group of sea turtles. I popped to the surface to get my bearings. The beach was far away. The surf bobbed me up and down. I felt seasick and uneasy. Then I looked over at Alberto, happily swimming toward the turtles, and the uneasiness (mostly) went away. I knew that my Spanish fish was enjoying this day of our Hawaii vacation best of all. And I knew that, thanks to the ocean, we’d be back.

It’s only 33 miles wide, and just 67,000 people live here. But Kauai is its own world. Centered on Po’ipu, the island’s South Coast has broad white-sand beaches. The lusher northwest side holds the rugged Na Pali Coast, green Hanalei Valley, and the resorts of Princeville.

St. Regis Princeville Resort. Overlooking Hanalei Bay on Kauai’s North Shore, the St. Regis is one of the Islands’ most luxurious resorts—with room rates to match. Swim, snorkel with a marine biologist ($50/hour), golf, and get a Hawaiian Lomi Lomi massage at Halele‘a Spa or oceanside. Just as impressive is dining at the resort. From $475; stregisprinceville.com.

Poipu Kapili makes a good base for exploring the South Shore.

Poipu Kapili. This hotel is located on the South Shore, within walking distance of Po‘ipu Beach. The resort has 60 attractive low-rise condo units. From $225; 3-night minimum; poipukapili.com

Explore the island by air on a helicopter tour.

Island Helicopters’ Jurassic Falls Landing Adventure. One of the many companies that  offer flights touring the island. This one includes a stop at 400-foot Manawaiopuna Falls, famous from Steven Spielberg’s Jurassic Park. (No velociraptors, though.) Other highlights: the Na Pali Coast and Mt. Wai‘ale‘ale. From $349; islandhelicopters.com

Nalu Kai Grill & Bar. If you sip but one cocktail on Kauai, make it the cucumber-ginger margarita at this luxe bar in the St. Regis Princeville hotel.

Grand Hyatt Kauai Resort & Spa. Need more than one cocktail? Try the mai tai at this resort in Koloa (grandhyattkauai.com).

Kauai Grill. France meets the Pacific with superb results at Jean-Georges Vongerichten’s restaurant in the St. Regis Princeville. You can sample small-plate versions of the menu at the St. Regis Bar. $$$$; closed Sun–Mon; 5220 Ka Haku Rd.; 808/826-9644.

The Mermaid Cafe is a perfect stop for vegan and vegetarian options.