The New Way to Fly: Private Jets Are More Accessible Than Ever

Booking with a boutique airline can mean fewer lines and less hassle. 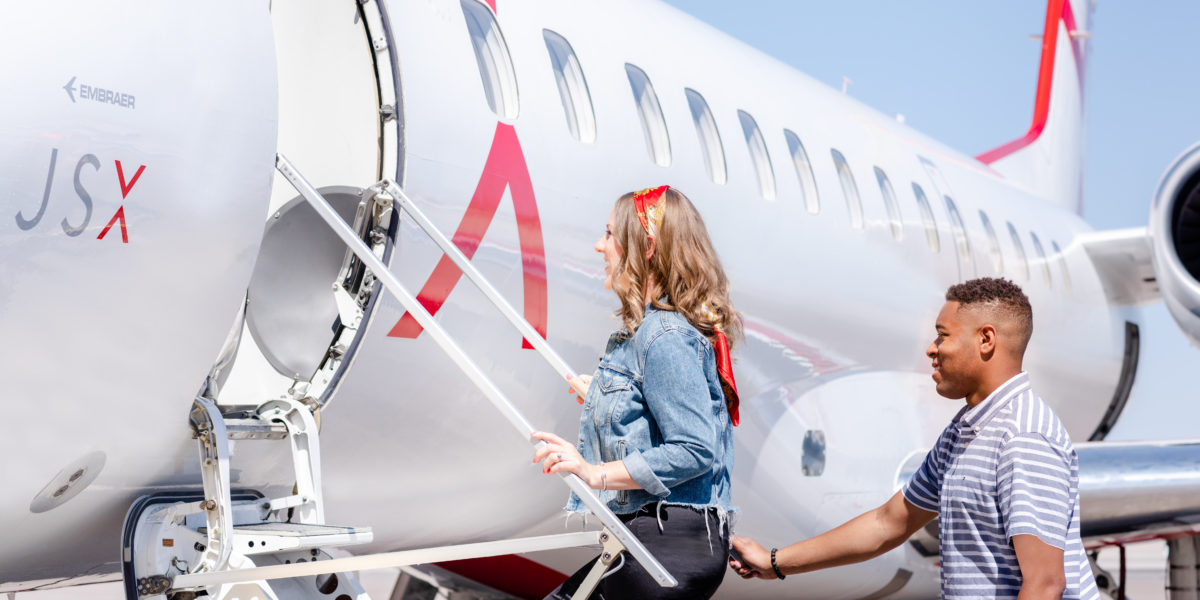 Courtesy of JSX
JSX is a boutique air carrier that allows passengers to arrive 20 minutes before nonstop flights to destinations in the West and beyond.
Written by Kristin Scharkey October 30, 2021
Share this story

Tired of long airport lines? Hate the hassle of baggage claim? It might be time to try a boutique airline.

Here’s the good news: It’s never been easier to fly by private jet. Many carriers debuted services amid the pandemic that make this type of air travel more accessible and affordable than ever. Want to whisk away your girlfriends for a weekend getaway in California wine country? You can fly right into Napa on a shared jet for under $200. Care to hop over to Vegas? The Bay Area? Phoenix? You can quite literally order up a seat on a small plane as you would an Uber, or a meal on Postmates. You can check in at a private terminal, then enjoy plenty of leg room on your flight.

Many boutique airlines continue to expand by utilizing smaller, regional airports to provide lower fares and avoid larger crowds. That means more room for social distancing, and more route options for those who want to embark on leisure getaways in the West.

“Access to smaller, regional airports opens up new frontiers and creates a seamless, flexible flying solution with no crowds, lines, or waiting,” says Sudhin Shahani, CEO of California-based Surf Air Mobility, which offers daily, scheduled, shared private flights across the West Coast as well as on-demand charters to more than 5,000 smaller, regional airports across the U.S.

Prior to the coronavirus pandemic, the Surf Air mostly served commuters but “quickly pivoted” to leisure travel, Shahani says, as more people began working from home. The airline expanded to popular Western getaways like Aspen, Palm Springs, Yosemite, and more. “For that reason, leisure travel has stayed constant for us throughout the past year,” Shahani adds. “We’ve never flown to more places on a quarterly basis.”

And the demand doesn’t appear to be slowing down anytime soon. Private Jet Card Comparisons, a private aviation subscription guide, surveyed its subscribers this summer and found half of more than 200 respondents started or re-started flying private due to the pandemic. Every single one of them said they planned to continue after COVID.

More than 50% of survey respondents said they utilize private aviation strictly for vacation and leisure, with that number rising to 64% among new users.

Here are some of the West’s newest air travel offerings—some of these flights might be cheaper than you think. Enjoy avoiding those early Monday morning crowds and arriving 20 minutes before departure.

JSX allows passengers to arrive at private terminals 20 minutes before nonstop flights to destinations in Arizona, California, and Nevada, among others. Its “hop-on” jet service is rounded out with flight attendants, power outlets in each row, and complimentary food and beverages.

A one-way flight between Las Vegas and Oakland, California this month starts at $149. JSX books 30 seats per flight and offers complimentary snacks and drinks onboard. Your first two checked bags are free, including golf bags and winter sports equipment like skis or snowboards. An added bonus? No middle seats.

Surf Air CEO Sudhin Shahani estimates the airline’s passengers spend on average 75% less time in the airport. A one-way Surf Air flight between the California cities of Hawthorne and San Carlos starts at about $406.

If you’re constantly in the air, the airline also offers monthly “all-you-can-fly” memberships starting at $199. Additionally, Surf Air recently acquired the online aviation platform Blackbird where other operators can list their scheduled and chartered flights, making it easier than ever to see many of your options in one place.

Further north in Canada, Iskwew Air is an Indigenous- and woman-owned airline that began as a 24-hour charter service and now also offers scheduled flights between Qualicum Beach Airport and Vancouver International Airport. A twin-engine PA31 Piper Navajo Chieftain seats eight. A one-way ticket in October starts about $146, or you can pay more for a flexible ticket that allows free changes or cancellations up to 24 hours before take-off.

An upscale experience can be found on flights by Aero, where all the seats are first-class on semi-private jets with a private concierge. The airline offers cancellation up to 48 hours before a flight to destinations such as Napa Valley, Jackson Hole, Sun Valley, and Aspen. A flight from L.A. to Vegas is $950, while L.A. to Aspen runs about $1,400 to $1,600.

These aren’t private jets but we couldn’t tell you about new ways to fly without a nod to the region’s newest airline. No change fees and $20 checked bags are just a few of the perks from Avelo, which utilizes a fleet of Boeing 737-800 aircraft for nonstop flights out of Hollywood Burbank Airport and into smaller airports all across the West. A one-way wine country getaway from Los Angeles and Sonoma starts at about $29 this month.

The relatively new airline launched service in April and currently flies to 10 western destinations. Last month, guests boarded its inaugural flight between Sonoma and Las Vegas—with rates as low as $39. Next month, it will add East Coast service by bringing online routes from airports in Connecticut and Florida.

Airport Crowds Are Back. Here’s How to Stay Ahead of Them.