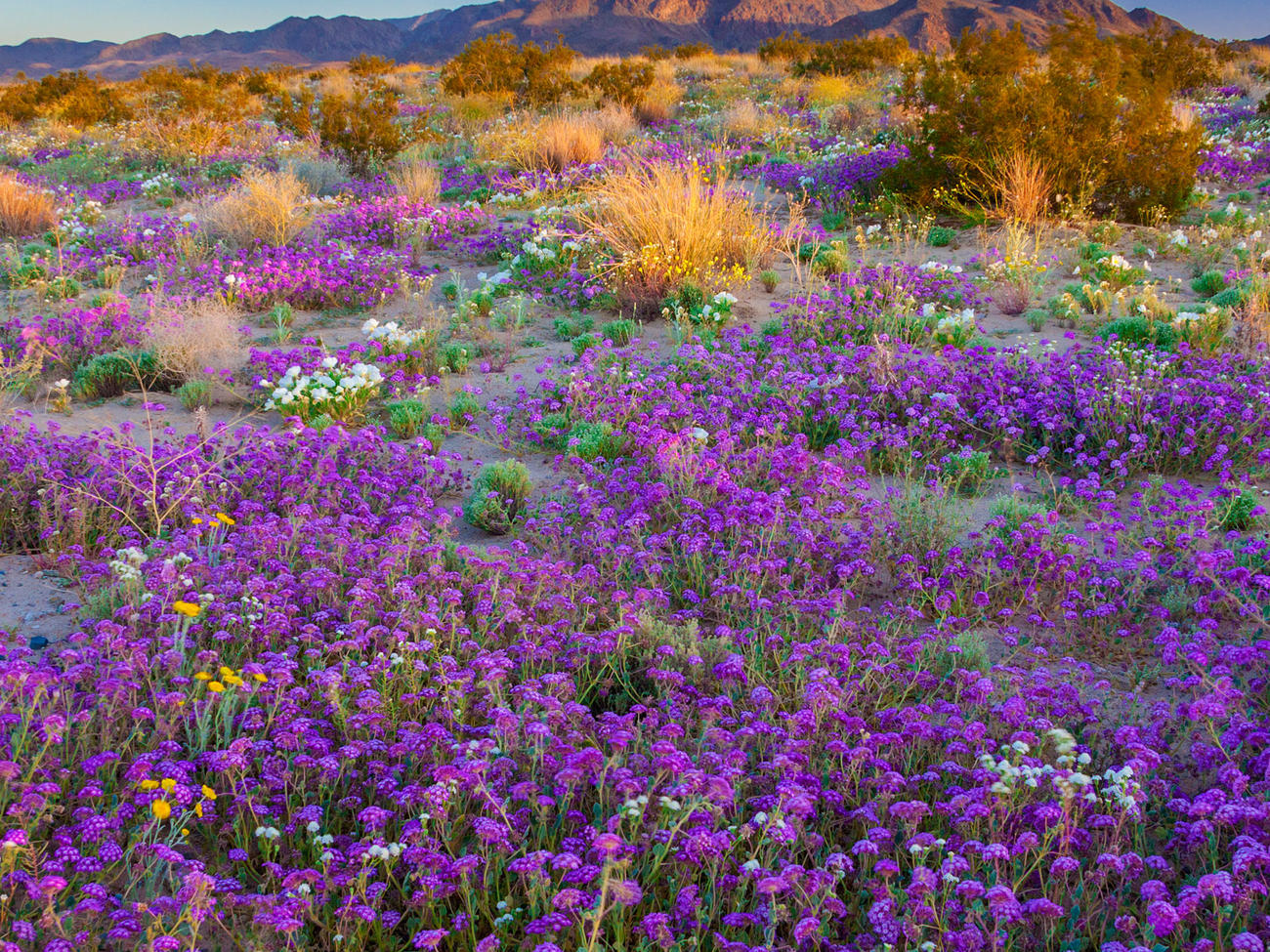 We all love the vast expanses of California’s wildflower super blooms — but over-tourism is seriously impacting some areas. Cal Poly botany and ecology professor Dr. Matt Ritter has some tips for avoiding the crowds and taking in the breadth of California’s floral splendor—and his new book, California Plants: A Guide to our Iconic Flora, is the ultimate guide.

California is a special place for its botanical rarity and spectacular wildflowers. It’s also one of the world’s remaining biodiversity hotspots. The state’s Mediterranean climate creates mild wet winters and long, hot dry summers. Many plants respond to the months of drought in the form of a seed: growing in the late winter, blooming in spring, setting seed and dying in summer. These plants are the spring annual wildflowers. Nearly one third of all the state’s plant species are annual wildflowers, and in a good rain year, California’s landscapes come alive with color.

The blooms don’t happen all at once, and spring is longer than you think if you’re willing to chase it. The wildflower blooms of California start in the southern deserts in March, working their way north, into the mountains, as the spring months tick past. By the time of summer road trips, much of California has turned brown, yet there are still plenty of wildflowers to see if you know where to look.

So, if you haven’t had enough wildflower experiences yet this year, or you want to avoid the hordes of poppy seekers, get yourself to higher ground where some of the best of our native flora awaits. Here’s a guide to following the flower trail from the start of the season to the end.

Easily accessible, North Table Mountain Ecological Reserve, north of Oroville in Butte County, is an island of color rising above the valley floor. The mesa is an old lava flow that collects water, creating streams and pools crowded with flowers. Its diverse habitat of grasslands, marshes, and oak woodlands allows visitors a premier experience to see a large selection of wildflowers. Although its peak season is usually in April, there are still many species that can be seen during May and early June, especially in wetter years. On the drier areas of the plateau, lupine and popcorn flower are the late showers, and in the marshes and along stream banks you will find yellow monkeyflower and maroon- and white-speckled clovers, with sporadic showings of pink checkerbloom. Among the drying grasslands, you may spot mauve, round-toothed snake-lily, yellow gold nuggets, pink farewell-to-spring, and delicate white fairy lanterns in the shadier parts.

The South Yuba River State Park, near Nevada City, has several trails to view blooms. Again, the peak season is in the spring, but with some luck and rain, certain native flowers will still be in bloom. Look for the light-pink flowers of the canyon dudleya clinging to the rocks at the trail’s edge. If you’re lucky, you’ll find California pipevine, a rarity only found in Northern California. Its musty-scented, maroon flowers are shaped like a tobacco pipe, and it’s the only food source for the larva of the swallowtail butterfly. If you see the vibrant orange of the bush monkeyflowers, pretend to be a pollinator and touch the white center of the flowers and watch as the two lips of the stigma close in front of your eyes.

For late-season spring wildflowers, several locations just north of San Francisco are spectacular. In May, not far from the urban bustle, Russian Ridge Preserve offers encounters with many grassland favorites including carpets of goldfields, showy poppies, sprite populations of Johnny-jump-ups, bundles of blue-eyed grass, and spires of colorful lupine.

Another prize location for our native flora north of San Francisco is Point Reyes National Seashore. The amazing combination of coastal bluffs and forests provides a beautiful selection of flowers. Abbotts Lagoon is an easy location to visit fields of impressive goldfields and poppies. Another worthwhile stroll to observe a variety of flowers is the Chimney Rock Trail where owl’s clover, footsteps of spring, checkerbloom, Douglas’s iris, tidy-tips, and Indian paintbrush color your walking path amongst other native favorites.

Near the town of Truckee, strolling the Sagehen Creek Trail brings views of meadowlands filled with pink shooting stars, a brief, but impressive blooming of blue camas lilies around Sagehen Meadow, and the hardy, yet graceful, western peony tucked into the woodland landscape.

South of Lake Tahoe on the Carson Pass Trail, the month of July unfolds a colorful landscape of cheerful blue flax, Indian paintbrush, showy clusters of scarlet gilia, and the waxy, orange and spotted faces of the sierra lilies.

At their showiest in June and July, the blooms of higher elevation Mono County are a pleasure to behold. Flowers found in the areas of Tioga Pass are the hot pink mountain pride, Labrador tea, crowded lupine, and red and white heather. Around Parker Bench you might see mule ears, dwarf phacelia, sticky yellow-throats, and western hawksbeard.

Late bloomers, the wildflowers of the Shasta Cascade region begin their stunning display around the middle of July and, at higher elevations, continue into August and September. You can see the hummingbird pollinated snow plant emerging from bare ground, and Western wallflower and corn lily abound in roadside meadows.

In the Lassen Volcanic National Park, the bluish-purple flowering silver leaf lupine, the white alpine false candytuft, and the pink pussypaws are all specimens you might come across while walking the park’s remarkable summit trail. Along the Mill Creek Falls Trail in the southern part of the park, you’ll see impressive fields of mountain mule’s ears, catching the mid-summer sun on their bright yellow petals and silvery leaves.

Learning about our exceptional native plants, their habitats and stories, is not only enjoyable but also deepens our relationship to and appreciation of the places around us. Explore these stunning locations and soak up the end of the season for our painted California landscape!

Learn more about all the plants you’ll see on your road trip using California Plants: A Guide to Our Iconic Flora.

Dr. Matt Ritter is a botany professor at Cal Poly University in San Luis Obispo, CA. He teaches the botany and ecology of the state’s wonderful flora. He is the award-winning author of two books about California’s plants: A Californian’s Guide to the Trees Among Us and California Plants: A Guide to Our Iconic Flora.