North of San Francisco, the coastline is pristine and the oysters are fresh 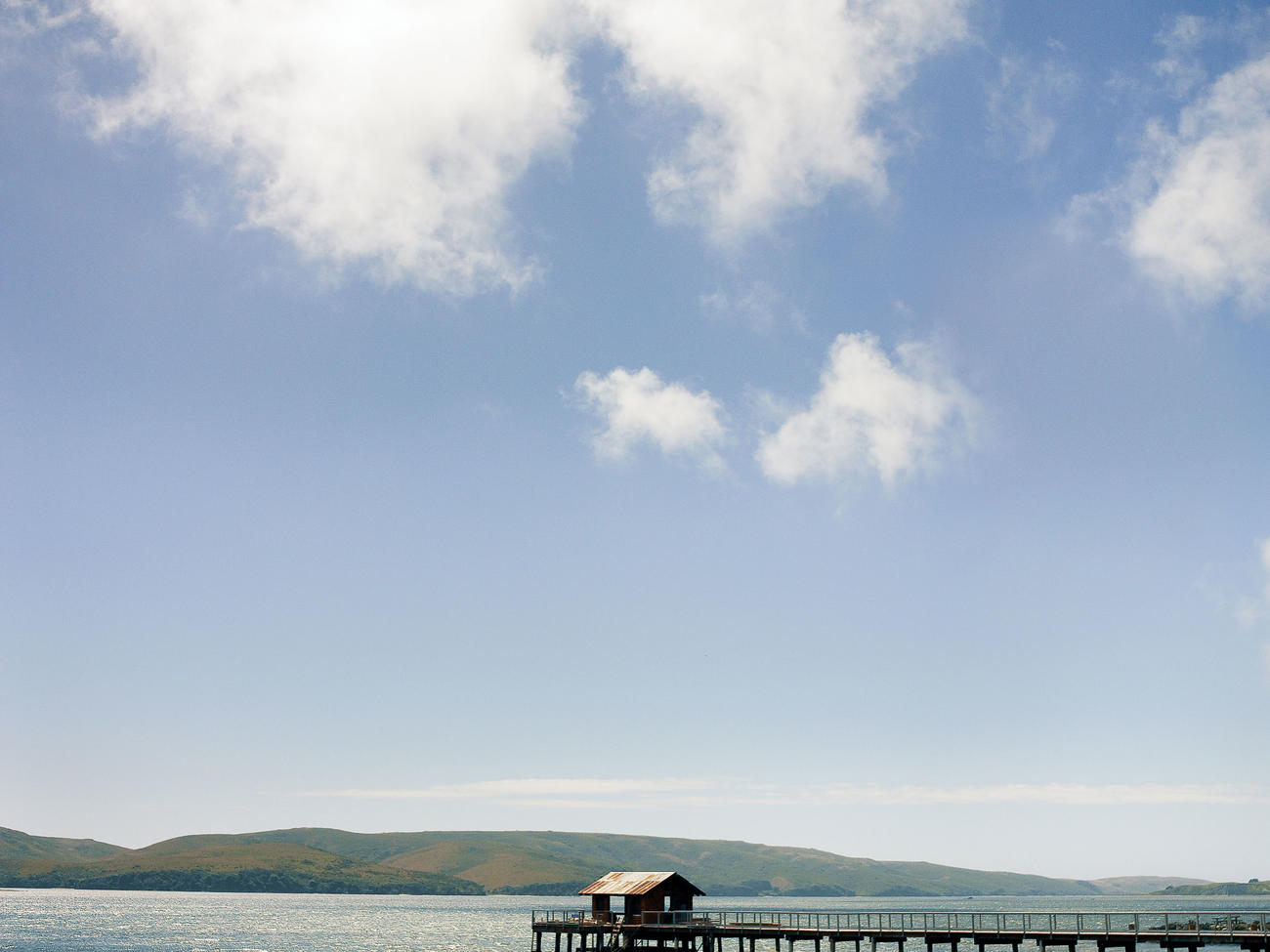 Thomas J. Story
The Boat Shack is one of many historic buildings at Nick's Cove & Cottages, a resort being reinvented by San Francisco restaurateur Pat Kuleto.
Written by Margo True August 2, 2007
Share this story

We’ve been hiking for hours along the Inverness Ridge Trail, above the shining blue ribbon of Tomales Bay, and we’re ravenous. Maybe it’s all the gazing at the water that leads my boyfriend, Peter, and me to look at each other and mouth the same word: “oysters.” Twenty minutes later, we’re sitting at a picnic table at Hog Island Oyster Co., shucking and slurping cold, firm, plump Pacifics harvested a few hundred feet away.

You can find good local food in any number of beautiful places, but in Tomales Bay, on California’s North Coast, there’s a special kind of seamlessness between the act of eating and just being in nature. The loveliness of this landscape, which flanks the Point Reyes National Seashore, is in fact shaped largely by food and the raising of it.

Anns View on Tomales Bay The bayfront sides of these two gleaming white suites have huge panoramic windows. Shimmering bluish green bedspreads match the color of the bay beyond, so when you’re in bed you feel like you’re floating in the water. Continental breakfast is all about superb local foods ― Straus Family Creamery milk, blackberry jam, cheese from Cowgirl Creamery or Straus, and baked goods from Brickmaiden Breads. INFO: From $225; in Marshall; 415/663-9144.

Apple Cottage A comfy four-poster bed, a loft, and a beautiful old apple orchard, plus exotic chickens and a hot tub. INFO: From $175; 1 mile west of Point Reyes Station; book through Inns of Marin or by calling 800/887-2880.

Manka’s Inverness Lodge A major fire in December 2006 destroyed the Arts and Crafts lodge, dining room, and kitchen but left the 10 bewitchingly beautiful, fog-shrouded cottages and rooms untouched ― in the woods, on the shore, and up in the hills, they’re all expressions of owner Margaret Grade’s eccentric, elegant imagination. The restaurant, where she and partner Daniel DeLong cooked the finest, most creative food on the bay, is being rebuilt (they hope to have it finished by late 2008). INFO: From $235, including breakfast; in Inverness; 415/669-1034.

The Old Point Reyes Schoolhouse Compound Gorgeous private gardens surround the three accommodations here (owner Karen Gray is a former landscape architect). The Jasmine Cottage, draped with blackberry vines, was made for romance; therestored antique Shepherd’s Wagon, perfect for kids, can be rented as an annex to Gray’s Retreat, a handsome barnlike house that sleeps six. INFO: From $185; in Point Reyes Station; 415/663-1166.

Ten Inverness Way B&B A 1904 Craftsman house with warm yellow lamps set against the wildness of the Inverness Ridge. Full of thoughtful touches ― a blackboard listing nearby wildlife sightings, good reading lights over the bed, cookies and tea in the afternoon, wine and cheese in the evening, a hot tub in the garden, and outstanding homemade breakfasts. INFO: From $159, including breakfast; in Inverness; 415/669-1648.

Next: what to do

Through the window near the main entrance of Tomales Bay Foods, observe award-winning cheeses being made. Or sign up for the demonstration and tasting ($3; 11:30 a.m. Fri). You can buy the cheese, as well other good local and international cheeses, at the creamery’s sales counter. INFO: Closed Mon-Tue; in Tomales Bay Foods, 80 Fourth St., Point Reyes Station; 415/663-9335.

Horseback riding Point Reyes Arabian Adventures owner Susan Rowsell will trailer your steed (she’ll provide one) to any spot around the bay you choose for a guided ride. Horses are extremely well trained and peppy, not your usual trail nags. INFO: From $35 per hour, reservations required; on State 1 in Point Reyes Station; 707/477-7181.

Kayaking The veteran guides at Point Reyes Outdoors point out the bay’s natural marvels while you paddle, and they’ll help you improve your stroke too. INFO: From $75 half-day, reservations required; on State 1 in Point Reyes Station; 415/663-8192.

Straus Family Creamery Visit the West’s first organic dairy ― known for its rich, delicious cream-top milk in glass bottles ― to see the milking of the cows and make your own butter. Straus satisfies most of its energy needs by using a methane digester, which converts cow manure to electricity, enabling owner Albert Straus to drive an electric Toyota RAV4 fueled purely by cow power. INFO: The only way to visit is by joining an organized tour with Marin Agricultural Land Trust (MALT; see ” What to Do: Farm and Ranch Tours“)

Vladimir’s Czech Restaurant & Bar Seemingly every part of owner Vladimir Nevl’s long and storied life has ended up on the walls of his restaurant, from his boyhood in Moravia to his escape (on skis) from the 1948 Communist coup in the former Czechoslovakia to his life as an equestrian. Unfortunately, the hours are erratic and the food is unreliable, but it’s a great place to stop for a beer and a chat with Mr. Nevl. INFO: $$$; closed Mon; 12785 Sir Francis Drake Blvd., Inverness; 415/669-1021.

Next: where to eat

Cowgirl Cantina Stop by for terrific picnic fixings ― salads, sandwiches, desserts, and smoked meats and fish, plus pâtés, cheeses, and sausages ― at this little counter inside Tomales Bay Foods. You can buy local wines and produce here, too, to round out the meal. INFO: $; closed Mon-Tue; in Tomales Bay Foods, 80 Fourth St., Point Reyes Station; 415/663-9335.

The Marshall Store New owners spiffed up this little shack next to the Marshall Boat Works. The barbecued oysters are the best in Tomales Bay, and you’ll be happy eating the thick sandwiches and herby clam chowder on the decks over the water. INFO: $; 19225 State 1, Marshall; 415/663-1339.

The Station House Café An old stopping point for the North Pacific Coast Railroad (which abandoned the line in 1933), it’s now a handsome high-ceilinged dining room that’s a standby for starving hikers, bikers, and kayakers. Warm, doughy popovers arrive at the table almost instantly, and they’re huge ― as are portions of everything else, from outstanding fried calamari to velvety oyster stew (studded with leeks, spinach, and mushrooms) and a goopy but strangely appealing mound of polenta with portabella mushrooms, blue cheese, and madeira sauce. The garden patio, strung with lanterns, is very pleasant on a hot night. INFO: $$; closed Wed; 11180 State 1, Point Reyes Station; 415/663-1515.

Next: the oyster taste-off

Six oyster companies operate in and around Tomales Bay, and three are open to the public for tours and tasting. Oysters do well (and taste best) in a very clean environment, and Tomales Bay, one of the most pristine bodies of water on the West Coast, produces excellent oysters ― and has for centuries; the indigenous Coast Miwok were eating them thousands of years ago. A good, plump, salty-sweet oyster makes the ocean taste heavenly.

In 2004, owner Kevin Lunny took over the oyster farm, deep in the Point Reyes National Seashore, from the Johnson family, who had operated it for 50 years. The last oyster cannery in California, it produces 60 percent of oysters consumed in the state. The fascinating tour takes you from tanks of oyster seed to an example of the growing racks, where tidal rises and drops help the mollusks develop thick, strong shells.

Lunny, who also raises beef cattle on the Point Reyes peninsula, is a big believer in the virtue of oysters. “We can produce 10 times the amount of protein per acre in the bay than we can on land,” he says. He also points out that oysters, which feed on water-clouding phytoplankton, cleanse any body of water they’re in. “It’s fun to be producing food that in every way is positive for the environment.” INFO: Shop open 8-4:30 daily (oysters roughly $10 per dozen); tour free, reservations required; 17171 Sir Francis Drake Blvd., Inverness; 415/669-1149.

The oysters: Firm, meaty, clean-tasting Pacific oysters (Crassostrea gigas), harvested and shucked daily. These fast-growing oysters are the dominant species on the West Coast. At Drakes, you can buy them whole, for shucking yourself; shucked and packed in a jar; or on the half-shell, to slurp down at the outside table with some horseradish, a squeeze of lemon, or cocktail sauce. The oysters tend to be on the plump side, especially in spring, when, Lunny explains, “they grow like crazy because the sun makes the plankton boom.”

With its restaurant in San Francisco’s Ferry Plaza building, Hog Island is probably the best-known oyster company on the bay and has just released a well-written cookbook: The Hog Island Oyster Lover’s Cookbook: A Guide to Choosing & Savoring Oysters (Ten Speed Press, 2007; $20) by Jairemarie Pomo.

Named after a small local island ― where, according to lore, a barge once accidentally released a load of pigs ― the company was founded in 1984 by two marine biologists, Mike Watchorn and John Finger. On a tour sponsored through Marin Agricultural Land Trust (MALT; see ” What to Do: Farm and Ranch Tours“), you can see their floating oyster beds and learn about oyster-growing techniques (like gently tumbling the oysters to even out their growth and harden their shelves).

The oysters: Hog Island mainly raises and sells three species: Pacifics (called Sweetwaters here) have beautifully pleated shells, like tiny ruffled skirts. Their brininess is offset by a cucumber-melon finish. The Atlantic ( Crassostrea virginica, also known as an Eastern) is an East Coast oyster, with a flat, greenish shell and a sweet, delicate mineraliness. Kumamotos ( Crassostrea sikamea) are tiny, about the size of a quarter, with thick, deeply cupped shells that hold creamy, briny-sweet meat (one Hog Island staffer describes them as “little nuggets of joy”). All three are grown near the mouth of a creek. That sweet freshwater, combined with the nutrients in the seawater, helps create the complex, subtle flavors that Hog Island oysters are known for.

The oldest continuously run shellfish farm in the state, it’s been in operation since 1909 with just two owners;. “When the tides are out, you can see our oyster beds,” says current proprietor Drew Alden. He explains that his company grows only Pacifics, raising them both single-shell (laid out individually on racks to form pretty, sturdy oysters suitable for serving on the half-shell) and cluster-style (in clumps; cheaper to produce, but the imperfect shells mean the oysters must be sold shucked).

As at Hog Island, the waterside picnic area is equipped with tables and grills for barbecuing your own. But no reservations are needed here ― it’s first come, first served. You’ll need to shuck your own, but the very friendly staff is willing to show you how. INFO: Shop open 8-6 daily (oysters roughly $10 per dozen); free tours, reservations required; 15479 State 1, Marshall; 415/663-1242.

The oysters: Five different sizes of Pacifics, from extra-small to jumbo, with a clean, fresh, briny taste overlaid with the sweetness of freshwater. Plump meat, with thick, scarred shells; more straightforward in flavor than Hog Island’s. The staff sells hot sauce and limes as well as shucking gloves and oyster knives.