Top 10 BBQ Joints in the West 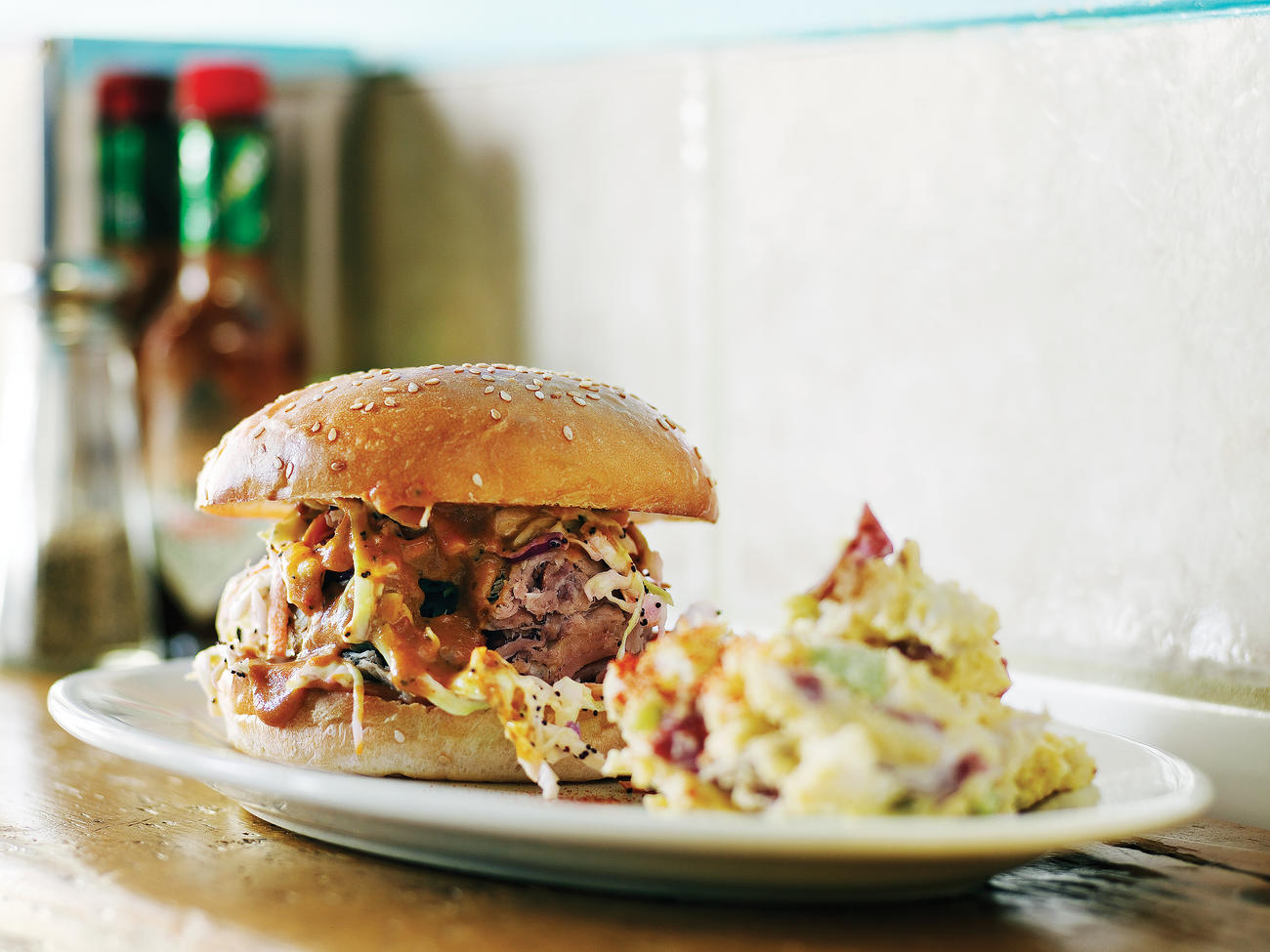 Thomas M. Barwick
The Georgia Gold sandwich is a star at Roy’s BBQ in Seattle. It features pulled pork, coleslaw, and mustard sauce, with potato salad on the side.
Written by Peter Fish May 1, 2009
Share this story

At BarBersQ in Napa, all is sleek and soothing: a Zen koan in concrete, wood, and polished steel. None of the earthy ambience usual in a BBQ joint. No lurid lighting. No sauce-splattered plastic menus.

Could this be the real thing? I cut into chef Stephen Barber’s dry-rub baby back ribs. The meat pulls away easily from the bone, having been cooked “low and slow” for three hours over cherrywood. I chew, wipe my chin with a white linen napkin, kick back a Frog’s Leap Zinfandel, then try the tangy collard greens grown in the Napa garden of Barber’s business partner, Gene Tartaglia.

The West has imported a nation’s worth of BBQ traditions ― pork and beef, spicy Texas sauce and Carolina vinegar and Memphis dry rubs ― and added its own flair. Some influences are regional: barbecued oysters in the Northwest, Mexican carne asada in Arizona, the tri-tip grilled over oak that is Santa Maria–style. Some innovations are philosophical: grass-fed lamb, artisanal bread, and local ingredients.

While I think about this thin line between soul and chic, the West’s barbecue interpretation and ’cue tradition, I take another sip of my Zin, my saucy thumbprints smearing the glass, wishing I weren’t too full to bite into the smoked-chicken sandwich with Point Reyes blue-cheese mayo.

STARS OF THE NEW ‘CUE

Stephen Barber’s restaurant has garnered raves in the two years it’s been open. The ’cue ― brisket, ribs, pulled-pork sandwiches ― is exemplary, as are the sides of mac ’n’ cheese, cornbread and collard greens. Less traditional are some of the condiments (like serrano chile-spiced vinegar) and the wide-ranging wine list.

You gotta try: The Memphis-style pulled-pork sandwich, accompanied by, oh, a Frog’s Leap Zin. And even though it’s not strictly BBQ, the fried chicken is terrific, particularly splashed with the aforementioned serrano vinegar.

This is BBQ-sandwich heaven. Owner Shane O’Neil, who bought the tiny shop four years ago, makes the most of hickory-smoked meat with finely chosen details: an Asian lilt to Roy’s signature sauces and fab buns crafted by the neighborhood bakery. The joint itself is a narrow stand-up affair, its hot turquoise walls joyfully cluttered with pop-art collectibles.

Grass-fed lamb ribs? Just one sign that Podnah’s is not your ordinary BBQ joint. Owner (and Texas native) Rodney Muirhead got into the biz a few years ago when he lost his job and started L.O.W. (Laid Off Workers) Barbecue at the Portland Farmers’ Market. Now he’s opened a permanent venue, and Portland diners couldn’t be happier. Every day that Podnah’s is open, Muirhead lights the oak and mesquite fire at 5 a.m. Texas transplants swear it’s all the real deal, right down to the white bread and sliced onions.

You gotta try The brisket plate with a couple of ribs, pinto beans, potato salad, Mexican Coke, and pecan pie “with cold whoop.”

Okay, carne asada joints are not news in Mexico. But their sudden blossoming in Phoenix is a big deal. Of all the places offering carne asada ― the marinated and grilled “ranchera” cut of beef (think skirt steak) ― our favorite is this newcomer near downtown. Here, Mexican-born America Corrales Bortin (an elementary-school teacher by day) has perfected the carne asada art, serving up garlicky, orange juice–marinated grilled steak chopped into tender bits and wrapped up in several delectable forms: tacos, burritos, tortas, and quesadillas.

You gotta try The flour tortilla burrito with guacamole and pico de gallo. And sweet corn on the cob, rolled in tangy Mexican cheese and dusted with chile powder.

Next: Great stops for classic ’cue

After relocating to Colorado, Kansas City natives Tracy and Merry Ann Webb pined for their city’s moist barbecue. Taking the bull by the ribs, they opened their own family eatery in Longmont’s neo-groovy Prospect neighborhood. (A second location recently opened in Boulder.) Now a word-of-mouth phenomenon, the hickory-smoked, spice-rubbed pork (plus brisket, turkey, and more) elicits raves and inspires feasts of excess ― a corporate team once flew out from Minnesota for lunch. Grab napkins and settle down on the patio for a delicious, mountain-view meal.

Oysters thrive in the pristine waters of Tomales Bay, a narrow inlet of the Pacific an hour north of San Francisco, and barbecued oysters―sizzled in the half-shell on a hot grill―are a local icon. At the Marshall Store, an airy little cube set over the water next to a boatyard, they don’t get any better. Co-owner Tod Friend raises the oysters himself and knows how to treat his plump, briny-sweet beauties.

You gotta try Sitting on the deck to watch Friend or his son, Shannon Gregory, grill you up a hot, juicy dozen; drizzle each with sublime garlic-parsley butter and a dab of tangy-hot housemade barbecue sauce. On the side: hot garlic-herb bread. By the way, the price ($20 for 12 to 14) is the lowest on the bay.

Barbecue attitude might be brash, but the meat doesn’t have to be: The dry-rubbed, hickory- and cherry-smoked barbecue at Smokin’ Pete’s in Ballard is juicy with a subtle, almost haunting quality. Owners Eric and Julie Reinhardt are proud to share some of their wood-fired knowledge: In Julie’s book, She-Smoke (Seal Press; $17), coming out June 1, she encourages women to take up the BBQ tongs.

You gotta try The platters. You can’t err with the generous portions of 14-hour brisket or “singin’ man” pork spareribs ― dab the meat with a little of the tangy original sauce.

Plan a pilgrimage this summer to the West’s best barbecue joints, tasting tender brisket, tangy ribs, carne asada, and grilled oysters along the way. From traditional to nouveau, these top spots offer a bit of everything.

More: Best barbecue in the West

It’s not the dead-simple decor or the inauspicious location on the most mundane street in the Southwest’s loveliest city; Bo Barnwell’s Whole Hog Café attracts a steady stream of locals ― plus tourists ― strictly for its meats and accompaniments. Pay attention to the restaurant’s name when you order ― go for the pork ribs or a pulled-pork and coleslaw sandwich.

In a tiny town on a windswept stretch of the Santa Barbara County coast, this Santa Maria–style BBQ classic isn’t shy about embracing its ranching roots: The century-old building is decorated with cowhide curtains held by horseshoe clasps. The clientele is a mix of local cowboys in their Stetsons and foodies making a BBQ pilgrimage from L.A. or San Francisco.

You gotta try The Pinot Filet. Served over grilled polenta, it’s where California barbecue meets the area’s Swiss-Italian heritage. And you get pinquito beans on the side.

If such SoCal perennials as Phillips Bar-B-Que in Leimert Park are hall of famers, then think of this as the rookie of the year. Brothers Chris and John Bicos took a beloved though tired restaurant that dated back to 1946, updated its interior, and reinvigorated the barbecue menu with superior versions of classics like beer-braised Texas brisket.

More:  The West’s Top 10 of everything

Top 10 BBQ Joints in the West