Cut down your water use with our tips on faucets, showerheads, bathtubs, and more 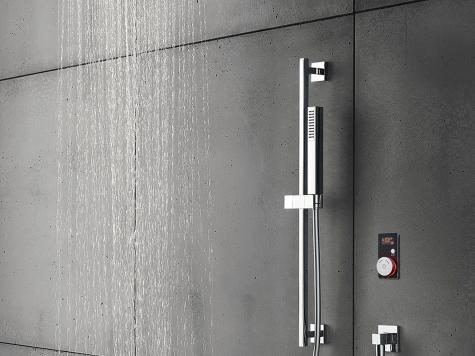 They are often considered mere finishing touches chosen for convenience or aesthetics, but the fixtures in your home, including toilets, faucets, showerheads, and bathtubs, have a great impact on your water use. Once you buy the most eco-friendly models, do your best to use them responsibly. Don’t leave the water running longer than needed, take shorter showers, and consider incorporating gray-water systems.

Similar to Energy Star for appliances, there is a federal program sponsored by the Environmental Protection Agency called WaterSense, whose label indicates that a fixture has been certified by independent testing to meet strict water-saving requirements. According to the EPA, the average American uses about 100 gallons of water each day, and at least 36 states anticipate major water shortages by 2013. It is everyone’s responsibility to rein in water use to protect this natural resource, as shortages have a major impact on the environment as well as on food production, farming, and jobs.

Toilets account for approximately 30 to 40 percent of residential water use, so you will certainly see a difference in your water bill by upgrading to a low-water-use toilet. Replacing old toilets should be a high priority in your efforts to make your home more eco-friendly. Currently, federal mandates require that all new toilets use 1.6 gallons of water per flush or less. WaterSense-labeled toilets use 20 percent less water than that, or about 1.28 gallons per flush, and they must also perform well. Dual-flush toilets are becoming a popular way to save water. Push one button and the flush uses about 0.8 gallons for liquids or paper; push another button and it uses up to 1.6 gallons for solid waste.

Faucets in the kitchen and bathroom should be equipped with low-flow aerators that reduce the amount of water coming out. You can replace the aerator on older sink faucets that you don’t plan to update. Water flow should be reduced to no more than 2 gallons per minute (gpm), though you can find aerators that reduce it to 1 or 1.5 gpm.

Showerheads can now be found in 1- or 1.6-gpm models that still get the conditioner out of your hair. Aerating showerheads reduce water flow by mixing air with water droplets, but these can cause the water to lose heat. If you like a really hot shower, you’ll keep turning up the hot water with an aerating showerhead, which requires more energy. Laminar-flow showerheads use individual streams of water and don’t create as much steam or lose heat like aerating ones.

Any new showerhead you buy must meet the federal mandate of no more than 2.5 gpm, but there is currently no law prohibiting people from installing multiple heads and body sprays in one shower, which wastes thousands of gallons of water, requires more energy to heat the extra water, and often necessi-tates the addition of a tankless water heater or larger water-supply pipes. If you want to be able to share a shower, put the second showerhead on a separate valve so it can be turned off when not needed, and avoid body sprays altogether. There are also showerheads on the market with a thumb valve on the side that allows you to turn off the water while you soap up and turn it back on when you’re ready to rinse.

Bathtubs of standard size may use less water and energy than a shower, depending on the length of the shower. If you have a low-gpm showerhead, you’ll use approximately 10 gallons during a four-minute shower. It takes 30 to 50 gal-lons to fill a bathtub. So if you tend to do your best thinking in the shower, you’ll likely use less water soaking in the tub for 20 minutes than you would during a 20-minute shower. Try not to give in to soaking tubs, which quickly deplete standard water heaters, or jetted tubs, which require electricity to run a pump motor.