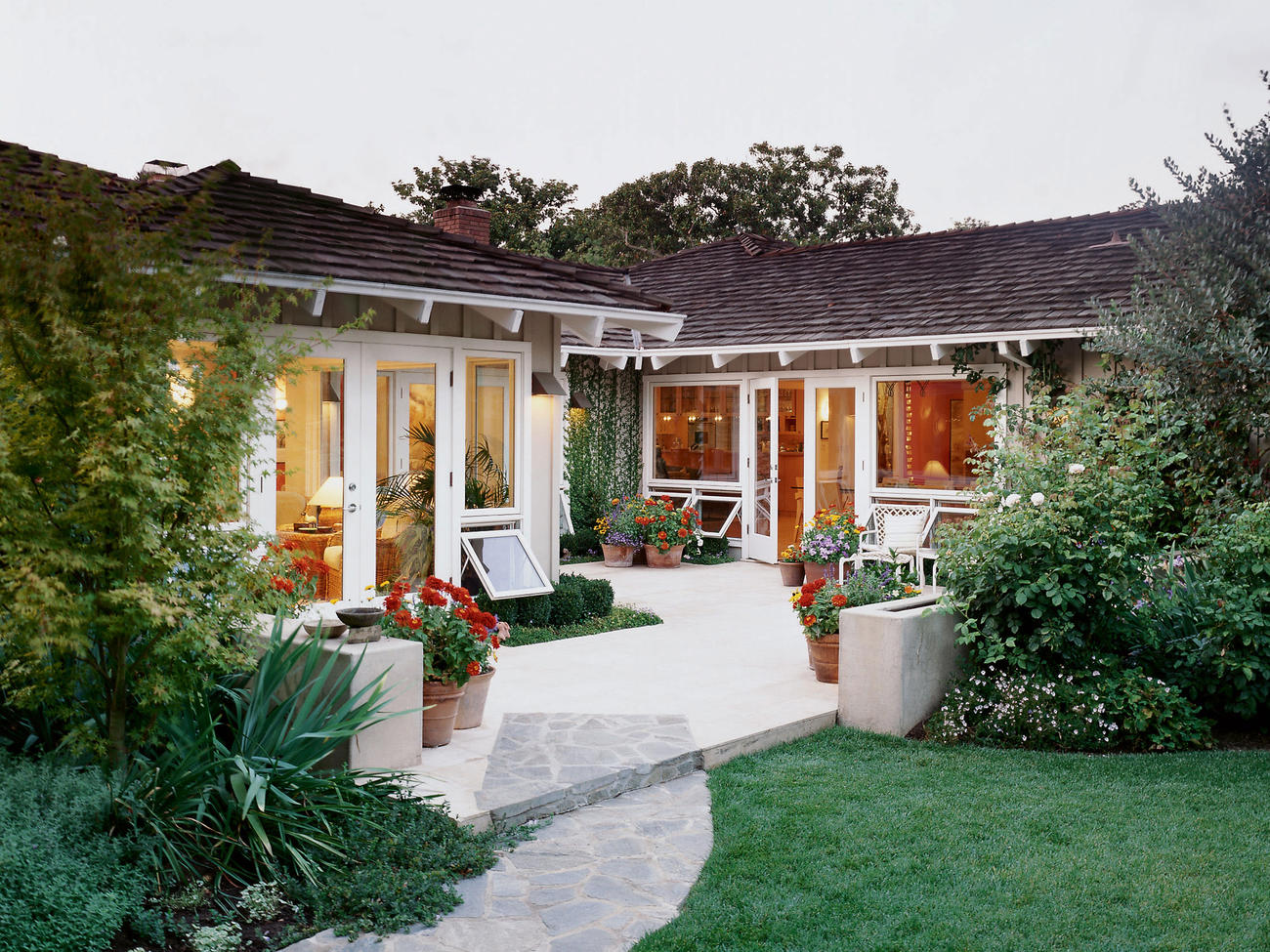 Interior designer Nicki Moffat and her husband, Pete, a contractor, wanted to bring their 1950s suburban ranch-style home into the 21st century. Typical of such houses found across the West, this Palo Alto, California, home had small, dark rooms, with low ceilings and poor access to the garden creating a cramped feeling. But the Moffats didn’t want the façade to lose its essential character. “We wanted our home to still fit the neighborhood and not call attention to itself,” says Nicki. Today the unassuming exterior gives little hint of the surprises inside.

To make the house more open, the Moffats removed interior walls to create spaces that span the width of the house. They added vaulted ceilings, colored accent walls, skylights, and an easy flow to the garden. Wide openings to rooms off a center hall, extensive built-in storage details, and minimal freestanding furniture reinforce the airy feel.

Conceptually, the floor plan is an upside-down F that divides the house into two zones. The front part (near the street) wraps around three sides of a small patio and contains entry, living, dining, and kitchen areas and a study and sunroom. The more private rear wing includes bedrooms, baths, and a home office, which surround a garden with an outdoor fireplace, an outdoor kitchen, and a pool.

Both ends of the house were expanded. The kitchen grew toward the street, and a new master suite borrowed some of the garden area at back. However, the biggest challenge was opening up the core of the house. This required major demolition: The couple had to add load-bearing beams for cathedral ceilings and build a new roof that stayed at the same height as the original.

Even on a gloomy day, the interior of the home seems surprisingly bright, thanks to mostly white walls and ceilings and 18 skylights. In most cases, the skylights are placed so diffused light reflects off the walls. The kitchen, bathrooms, laundry room, and office have skylights centered over the room, partially masked by open grids of maple that are flush with the ceiling.

Level ceilings define corridors that link but visually separate the major rooms with vaulted ceilings. This design strategy creates an accordion-like feeling of compression and decompression. A vivid persimmon-colored wall and a skylit art partition add drama to the foyer.

The Moffats added great built-in storage during their remodel.

The Moffats added great built-in storage during their remodel.

The dining room features cabinetry with open niches and glass doors, plus a built-in buffet.

In the office, deep bookcases and display shelves surround the windows―even extending across them―turning the wall into a series of storage niches.

A corner of the kitchen contains a built-in pantry with vertical storage drawers that roll out, putting canned goods and spices within easy reach.

Daylight floods the master bath, thanks to a glass ceiling over the shower and glass interior partitions.

Glass cabinets act as dividers between the kitchen and the family room, pre-serving openness.

Alcoves in the hall contain built-in bureaus and a jewelry cabinet.