Welcome to For Sale in the West, a new weekly series where we shine a spotlight on spectacular homes for sale in the Western United States. Have a home you’d like us to consider featuring?  Email us!

Update: On Wednesday, October 16, Frank Lloyd Wright’s Norman Lykes House sold for $1,677,500 million at a live, public auction held by Heritage Auctions in Phoenix. The auction featured 19 bidders, with bidding opening at $750,000. The home was sold fully furnished to a winning bidder from out of state, who does not wish to be identified at this time, but plans to keep the home intact and use it as a vacation spot.

Designed by Wright in 1959 for Norman and Aimee Lykes, the home has only been on the market once before. The residence features three bedrooms and three bathrooms, a master suite with a balcony, and a terrace pool lined with mother of pearl.  The home is 3,095 square feet and sits on a 1.3-acre lot. It comes fully furnished with custom, Frank Lloyd Wright-designed furniture, and has views of Palm Canyon and the Phoenix Mountains Preserve. 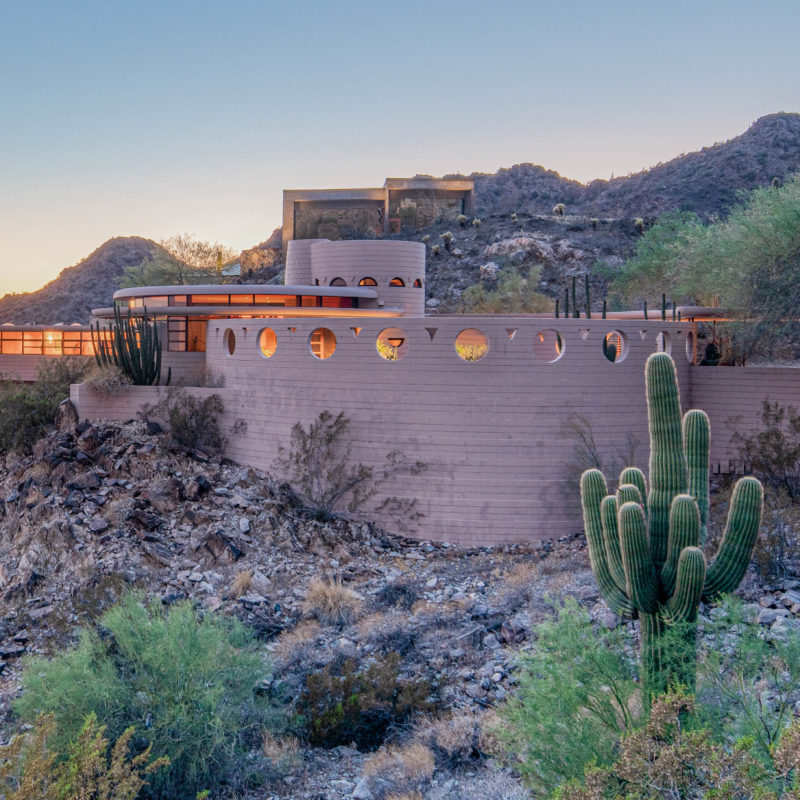 Frank Lloyd Wright was a renowned American architect and interior designer in the 19th and 20th centuries, designing hundreds of buildings from homes to public masterpieces like New York City’s Guggenheim Museum. The Lykes home is a great example of Wright’s eye for organic architecture, as he built the home to embrace the mountains and topography around it through circular designs and concrete blocks to blend into the desert landscape. The circular design makes it a particular marvel, as it’s one of the few circular buildings that Wright designed in his long career. The home was designed the same year as his death, and was completed in 1967 by Wright’s apprentice, John Rattenbury. The auction begins on Wednesday, October 16th, and bidders must pre-qualify. The auction will begin with no minimum, but the home was previously listed for $2.65M. Visit the listing here for more info on pre-qualifying, how to place a bid, and more photos of the home.

These Are the Hottest Housing Markets in the West Right Now

Need a Break From Modernism? Check Out These Six Beautiful Victorians for Sale