A well-thought-out design means you’ll be enjoying movies outside, not dealing with crucial mistakes. 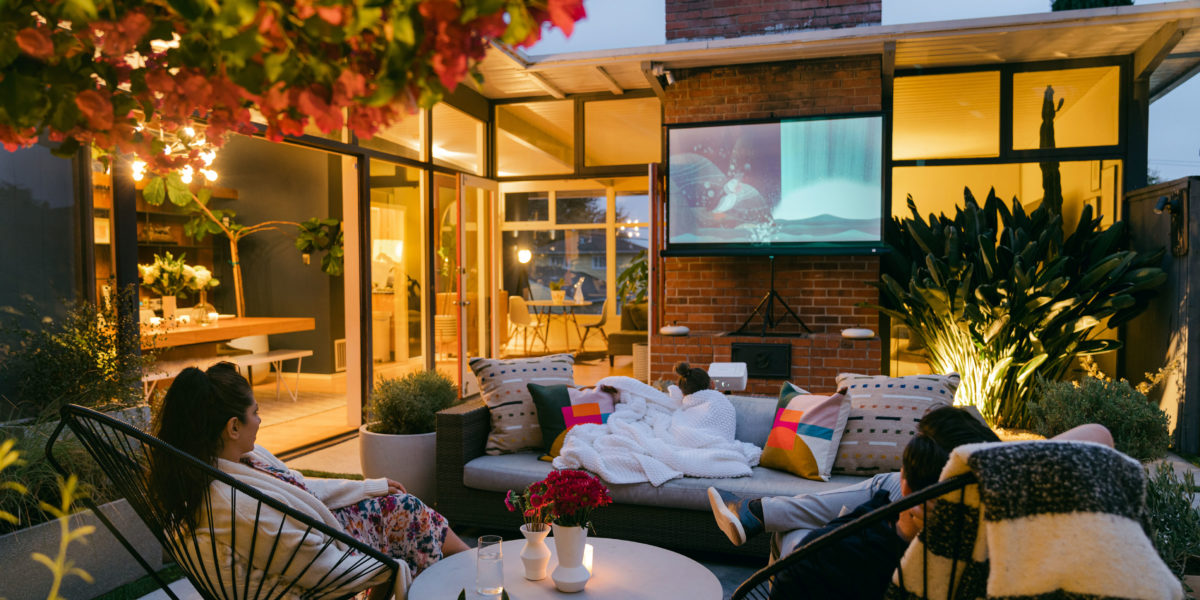 When Rashana Zaklit, the Hospitality Studio director at Gensler, a global architecture firm, looked at her Oakland courtyard, she had a vision: “Having an outdoor area for movie nights has always been a dream of mine from the moment we bought the house,” she says, adding that she imagined a space that took its design and planting cues from chic hotels in places like Napa Valley.

At the time, the outdoor area’s look was as far from wine country you could get—the courtyard hadn’t been updated in decades and had uneven concrete and unusable planting areas. Enter Kevin Lenhart, the design director at Yardzen, an online garden design company. When he saw images of the courtyard, he knew he could create Zaklit’s dream space. “Architecturally speaking, the space had strong mid-century modern bones,” Lenhart says. “Huge windows and glass doors presented the courtyard as a continuation of the interior spaces, and there was an obvious emphasis on indoor/outdoor living.”

Know What to Demo, and What to Keep

Get rid of uneven concrete paving and poorly designed planters. Also, consider what plants you want to keep; while most of the new plantings—like lavender and Little Ollie dwarf olive shrubs—emphasize lowering water usage (and are a nod to gardens in Napa Valley), the owners decided to keep a mature bird of paradise, a bold bougainvillea, and a large palm tree.

Use Paving to Organize Space

“Designing new paving gave us the opportunity to delineate different zones within the courtyard, which made the space more functional and gave the furnishings a stronger sense of belonging,” Lenhart says.

A solid strip of concrete creates a clear path to the front door. The living room was paved with the same concrete squares but set perpendicular to the structure to add visual interest. “Setting aside a designated path made the outdoor living room a bit smaller, which was perfect for cultivating a cozy atmosphere,” says Lenhart.

Meanwhile, strips of artificial turf through the gaps between pavers softened the space up and gave the area the barefoot, casual vibe you’d expect from a screening room.

Building new raised garden planters created a seat wall that doubles as a drink ledge, while also bringing shorter plants into the sightline of people seated on the couch. The effect is to make the space look more verdant. This is crucial given that the space is surrounded by walls and fencing.

Any of the following issues can derail a design, says Lenhart:

“Movie night can’t be work,” Lenhart says. “Homeowners will only actually go outside to watch movies if it’s easy and enjoyable to do so.”

Remember to Shop Around

When designing a new space, don’t feel you have to buy everything at one store, or your exterior might look like it came straight from a catalogue. The pillows are from Crate and Barrel. The vintage red fireplace was found at Urban Americana in Long Beach, California. The couches, which came from Restoration Hardware, were an investment, but don’t be afraid to throw in budget finds like the black-and-white blanket from Target. The area is so well designed and cozy that Zaklit now uses it not just as an outdoor screening room, but also for cooking, entertaining, and yoga.