In Los Angeles, a young family enlists designers Sally Breer and Jake Rodehuth-Harrison to reveal the next chapter of their storied light-filled Tudor-style bungalow The Los Angeles home of Daniela Hamilton and Scott Yacyshyn has a Hollywood beginning and a fairy-tale ending (or should we say beginning?). Daniela was an aspiring comedy writer working the front desk at a spa when she first met interior designer Sally Breer. Breer arrived at the spa harried and overscheduled and, above all, embarrassed to ask Daniela the favor of passing her keys to a mechanic she’d scheduled to repair her windshield wipers smack-dab in the middle of her treatment. Daniela, then sporting a blond mohawk, responded with style and humor. Within minutes the pair clicked, laughing over the awkward interaction. Before the end of the day, Sally offered Daniela the job of helping run her studio. "I like to tell people that it was love at first laugh with Sally," says Daniela. "Her laugh is nuts and contagious and the best thing in the world, especially if you're someone who is trying to make it writing comedy."

Fast-forward five years, and Daniela and her partner, Scott, a writer and illustrator, are collaborating on an animated television series, have a baby boy (Rambo, who is now two), and have purchased a home. They naturally turned to Sally and ETC.etera cofounder Jake Rodehuth-Harrison to apply their soulful stamp on the century-old Tudor home. Over the years ETC.etera had become the go-to interior-design firm for creatives; their work on Hotel Covell in L.A.’s Los Feliz neighborhood raised the bar on the Eastside hospitality aesthetic.

Jake toured the house with the couple and immediately found inspiration from its classic, eclectic façade. "The minute you see the house, set far back on a meandering stone walkway, you’re looking at this two-story turret, complete with merlons and crenels, so it literally feels like a castle," says Jake. Daniela, a self-professed bookworm, and Scott, a sci-fi nerd, were on the same page. "I made a joke about it being the Magic Castle and it stuck," says Jake.

That playful nod was just the dawn of the process. Jake and Sally frequently conceive eccentric narratives for their projects. "We were able to start with these fabulous characters and house and connect who they are and where they’ve been with who they will be as the story unfolds."

Sally and Jake envisioned an abstract storybook theme based in part on Daniela's extensive library (don’t dare ask her to part with a book) balanced by subtle nods to Scott's favorite science fiction and horror movies. (They even paid tribute to his regular Dungeons & Dragons gameplay.) The fairy-tale ending is a home that captures both a sense of wonder and a sophisticated edge. "I never want to leave," says Daniela. "Because it’s literally in the bones now, the amount of love they put into the house." “What’s great about an entryway like this is that it sets the tone for the rest of the house, so packing a few surprise elements into it was really fun,” says Jake. The vintage Italian “cocoon” pendant from Rewire Gallery in Los Angeles, for example, was inspired by one of the horrifying eggs from the cult-favorite movie Alien. And the arched door in Tardis blue? That’s a Doctor Who shout-out. “Again,” notes Jake, “adding something unexpected against the somewhat traditional architectural details.” Knowing full well they were in good hands, the couple’s single wish throughout the design process was for one emerald green velvet sofa. The favored hue hails from a beloved scene in the book Ozma of Oz, which trailed L. Frank Baum’s classic, The Wonderful Wizard of Oz. The designers opted to build a tufted sectional, upholstering it in childproof Plushy fabric by Perennials Fabrics. Bone inlay table; anthropologie.com. Pillows; brookperdigontextiles.com. Mantel candlesticks; hawkinsnewyork.com. Undeterred by the narrow dining space off the kitchen, Jake and Sally designed a slim dining table and built-in banquette set among a palette of warm earthy tones. The restrained elements, including soft, scalloped upholstery juxtaposed with wood-and-leather sling chairs by Lawson-Fenning and a linear brass light fixture from Hudson Valley Lighting, elevate this sunny nook,. The nun painting, by Rose Walton, was a surprise gift from the design team, is deeply beloved and the subject of many a pun. After discovering Witch and Watchman’s moody Amazonia Dark Wallpaper (note the owls), the designers felt that the tiny powder room off the entryway was the right space to pay tribute to the Ministry of Magic in the Harry Potter series. To re-create the scene, they used glossed emerald green subway tile and, for the finishing touch, a voluminous sculptural zodiac mirror. Amazonia Dark Wallpaper; witchandwatchman.com. Venetian Green subway tile; fireclaytile.com. Riffing off Daniela’s lifelong love of reading, the designers broke one of their cardinal rules by duplicating the bookbinding wallpaper they’d installed in the Hotel Covell, one of their previous projects. “It’s a flood of everything I love,” says Daniela, whose bed essentially feels tucked into a book. “I’ve always been a reader,” she says. “My whole life I’ve always had a book under my pillow.” Pheasant in blue wallpaper; twigswallpaperandfabric.com. 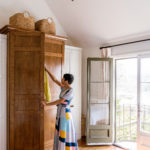 When it came to replacing the existing master closet, the designers found inspiration from the enchanted land of Narnia. “I think we can all agree it’s the most famous wardrobe in literature and the idea of a magical world that awaits you behind your clothes is something that’s very exciting,” says Jake. “I wanted to create the feeling of an antique wardrobe with its scale, but simplify the doors and moldings so it felt a bit more modern. We lacquered the side cabinets with the same color as the walls so they would disappear visually.” The master bathroom was treated to Alexandria in Hypatia wallpaper by Grow House Grow. “The lavender background against the existing sage green tile is so joyful to walk into,” Jake says. “We matched the color and painted the ceiling the same color.” Following a cram session on vintage nurseries, the designers eschewed the notion of wallpaper in Rambo’s room in favor of a custom safari mural. “I wanted it to feel like it could have been original to the house, maybe uncovered under layers of paint,” says Jake, who worked with L.A. muralist David King to fashion the muted, hand-painted menagerie with a soft pencil-drawn effect. “I think he nailed it,” says Daniela. “It’s a very sophisticated kid’s room that still feels full of childlike wonder.” Vintage pottery; popuphome.com. “The bathrooms had such a classic feel to them, so I wanted to maintain that feeling by bringing in some wallpaper but keep things a bit surprising with the pattern and colors,” says Jake. “The guest bathroom features Deco Jungle from Art Decor Designs by Jean Enness and has a really subtle metallic undertone to it. Adding a Geo Sconce from Jason Koharik also brings an unexpected element to the room.”

How to Decorate in a Maximalist Style

How to Nail Modern Bohemian Style

Before & After: Modern Bungalow Transformation