Back to the Future: Starting a New Life in a Vintage Mid-Century Home

A lost classic of mid-century modernism in Indian Wells finds more sustainable life under the careful custodianship of a new owner. 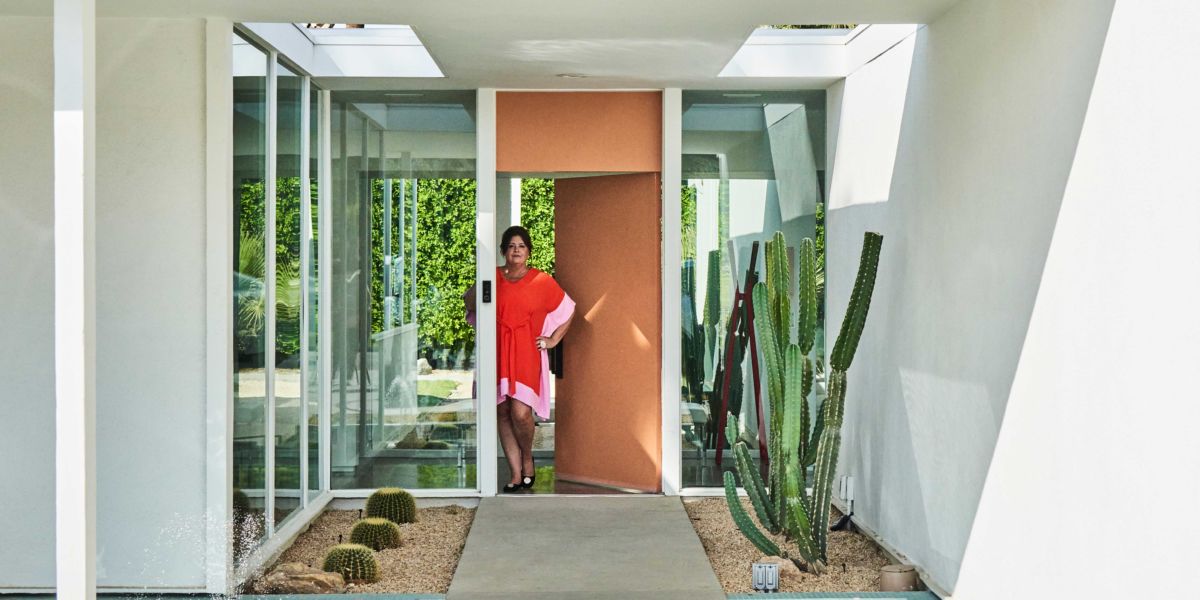 With houses as in life, sometimes we need to go back to go forward. When Karlyn Neel was vacationing in Palm Springs one February weekend, a real estate email showed up in her inbox advertising a perfectly restored mid-century modern house in Indian Wells: All low-slung glazing, with a reflecting pond in the entry and views of the Santa Rosa mountains—it was the sort of blast from the past that makes you dream of your future.

Designed by legendary architect William Cody, the Indian Wells house had it all: design pedigree, an old Hollywood past (Beverly Garland, the mother in My Three Sons, had lived there), and a backyard pool with view of the mountains in which Neel planned to spend nearly every moment of leisure. Neel, who was living and working in the San Francisco Bay Area, had been planning on eventually buying a second home in nature. But this dream some 10 years down the line became reality when she visited the house, promptly fell for it, made an offer, and bought the house.

From nearly every spot in the house, the windows and architecture create sightlines that connect your eye with nature: The fireplace is situated to provide privacy and warmth, while simultaneously revealing plantings across the way and the mountains beyond. Dramatic uplighting indoors and out was a signature move of architect William Cody.

The indoor-outdoor vibes and striking design appealed equally to Neel, who works as a user experience designer at Tesla. Neel grew up in a family that treasured the outdoors as much as good architecture: Her grandfather was a builder whose house on a cliff on the Pacific left an indelible mark on Neel as a child. Much of her childhood in Mount Shasta was spent outside in nature.

Her parents moved the family up from the Bay to Etna, California, in the Marble Mountain Wilderness. She grew up hiking, fishing, camping, and cross-country skiing. “My parents bought an old Victorian on an acre-sized lot,” says Neel. “We had a giant vegetable garden, and my mom canned fruits and vegetables. I literally grew up with the earth in my hands.” While the desert’s natural offerings are radically different, from the living room in Indian Wells the house is sited just so that you can see Mount Eisenhower rising in the distance while you sit by the fire. “It couldn’t be a better view.”

Only a few years ago, the house was in disrepair and listed on the market as a tear-down, but Southern California interior designer Jessy Moss worked with William Cody’s daughter to restore it to its former glory while updating the systems. Neel then installed solar panels and a Tesla Powerwall, adding even more efficiency to the house, a no-brainer addition after she got her first, and soon to be last, monthly $700 air-conditioning bill. The battery allows her to store the desert sun’s power by day and eventually sell it back to the city. Given the age and unreliability of California’s electric grid, the battery pack also gives her independence and resilience in the event of power outages, a reality in wildfire-plagued California, where blackouts roll through the region more frequently than ever before.

But beyond that and adding some architecturally appropriate desert landscaping and a firepit by the pool, Neel left well enough alone. “Preserving the historic significance of the house and keeping it pristine is very important to me as stewardess of this house.”

While Neel had been planning on flying down to Indian Wells on occasional getaways from the Bay Area, the pandemic forced her hand. She could either stay up north in Oakland and weather the storm, or hunker down in the desert. Knowing firsthand the benefits of the wide-open spaces that made her happy in her childhood, the restorative power of the sun, and the pool, Neel chose the latter.

“I’m very much aware of the privilege of being able to shelter in place in the best time of the year. I think all that vitamin D and sun helped with my mental wellness compared to if I’d stayed up north,” says Neel. “When it hits 120 degrees, I basically live in the pool.” Mindful of her good fortune, Neel is committed to sharing the joys of her house with the public and preserving it for generations, applying for the Mills Act to protect it from any modifications, and opening it up to tours during Palm Springs’ celebrated Modernism Week in the future.

In the meantime she’s put up a plaque to share the history of the house. While some people put them on the front entryway, Neel, ever the user experience designer, had a better idea. Why not put the plaque near the street so all interested passersby could easily read and learn about the architectural gem? “What I do for a living is create human-centered design experiences, so I made sure I picked the perfect rock that would perfectly mirror the mountain beyond and put it out front so people could enjoy it,” Neel says. “And now one of my favorite things to do is drink my coffee and watch walkers and runners stop and read the rock.”

Give Your Home Mid-Century Flavor

Much of Karlyn Neel’s furniture came from the previous home’s owner. Some she shopped for selectively: The green Papa Bear Chair and Eames credenza are from Los Angeles furniture store Modernica. Neel bought the art in the dinette from Palm Springs gallery Flow Modern, the bar cart from West Elm, the lip painting in the den from Sunbeam Vintage, and the vase from Sara Paloma on Etsy. Actual furnishings from the era are getting pricy, but here are a few of our favorite pieces that have that highball vibe without breaking the bank.

1 of 6Courtesy of LACMA

For a pop of mid-century color, hang this reproduction of a 1965 L.A. County Museum of Art poster on your wall. It commemorates the opening of an exhibition by one of the great artists of the 20th century, Alexander Calder.

A Pop of Art

Or go with this bright, attention-grabbing print from Chairish.com. It’s not exactly the same as Karlyn Neel’s but it’s got that same fun Pop-Art feel, and you don’t have to go to Los Angeles to make it happen.

The Mid-Century aesthetic may not be as overtly influenced by other cultures as, say Art Deco or Craftsman, but yet, Moroccan elements play well with your Eameses and van der Rohes. This rug adds warmth and complements the sleek Mad Men look.

Berber Moroccan Rug, from $1,275
4 of 6Courtesy of Interior Icons

Relax with a chunky tumbler in this mid-century masterpiece. If the bourbon doesn’t relax you, you might rest a little easier knowing that the lines are Saarinen-inspired, but the price is not.

This coffee table’s rounded-triangular shape and tapered legs are delightfully retro, the walnut woodgrain tabletop is timeless, and the metal finish is tastefully modern. A winning combination, in our book!

The sharp, sleek lines on this museum-quality, MCM-meets-modern chair make it a stunner, while the more compact size allows you to fit a statement piece in a studio apartment or small living room.

From the 2021 Wellness Issue

14 Ways to Get a Mid-Century Modern Look