A globetrotting couple’s new build in the desert draws inspiration from their world travels. 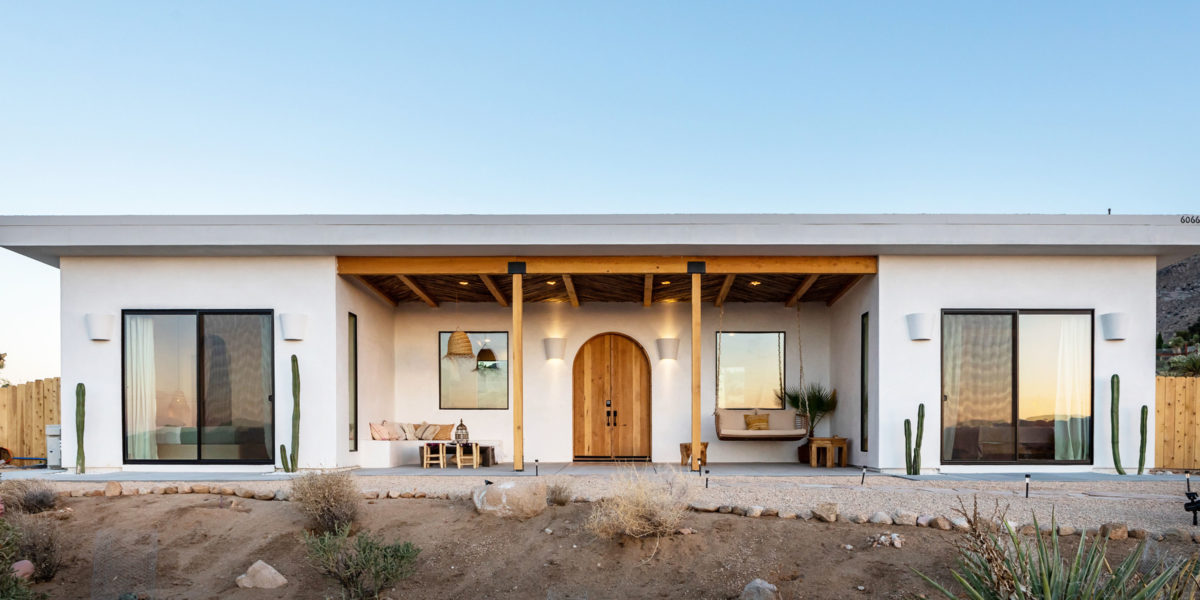 Natalie Saunders and Louis Litrenta have called many continents home. Saunders grew up in a surf town in Australia, Litrenta is from Chicago, and the two met while working in London. After moving from Chicago and Sydney and having their wedding in Hawaii, the adventure-loving couple settled on their next chapter: Joshua Tree.

“We had been to Joshua Tree several times as a stop-over visiting family between Sydney and Chicago,” says Saunders. “When visiting, we would joke about how wonderful it would be if we had our own little slice of the desert that we could call our own. We first looked at some old homesteads—more just for fun—but it became apparent that this dream could become a reality. On our fourth visit we ended up falling in love with a piece of land that was close to the park and town.”

They purchased the land, quit their day jobs in Sydney, and moved across the Pacific to get started on their new home.

The process had two stages: permitting and building. It took the duo about ten months to get permits in order, and the build itself, by Michael A Wilson, took just under a year. Design-wise, Saunders and Litrenta were inspired by styles they spotted around the globe during their travels. “We wanted to implement tadelakt (Moroccan plaster) used at the riads of Marrakesh, the warm plastered floors in Greece, and adobe fireplaces in New Mexico, specifically at Georgia O’Keeffe’s estate.” The couple was strategic about their outdoor spaces and made sure to consider the necessity for shade in their desert setting. The large front porch was designed with a hanging swing to enjoy the view that looks over the town of Joshua Tree, and built-in plaster seating was added for enjoying breakfast and coffee outdoors.

But it’s the porch ceiling that catches the eye as you walk up to Desert Wild (which you can now vacation in via Airbnb). “We hand-stapled hundreds of saguaro ribs to the ceiling in a chevron pattern,” saysSaunders. Inside, you enter onto the great room housing the home’s kitchen, dining area, and lounge. The couple’s favorite feature of the room are the windows and sliding doors to the backyard, which frame the pool, hot tub, and desert mountains. The kitchen itself is beautifully customized and encapsulates the couple’s overall aesthetic, with plaster countertops, reclaimed wood cabinetry, and a textured light over the dining table. The brass backsplash by Clé Tile makes for a bold neutral, tying in with brass accents throughout the rest of the home.

The couple worked with Fire on the Mesa for their cabinetry and kitchen table builds. “It took weeks of planning and millimeter precision building, but it came together seamlessly in the end,” says Saunders. The living room features a custom-built adobe fireplace. The couple was inspired by Pueblo Revival homes in New Mexico, and knew they wanted something emblematic of the architectural style as the focal point for their living space. The fireplace includes bancos on both sides for additional seating. Layered Moroccan rugs and textured poufs add additional warmth to the room.

Over the record player, there’s a designated wall space for projecting movies while enjoying the fire. “We didn’t want to clutter the space with a television, so we opted instead for an overhead projector,” says Saunders. Desert Wild has two bedrooms, and it’s easy to spot the wow factor in the master. The large plaster arch was designed for the bed to sit inside, while also imitating a headboard.

“We knew we had to get the arch just perfect, otherwise this room  wouldn’t work. Luckily, we think it’s perfect,” says Saunders. Terra cotta-hued linens and minimalist touches on the walls like air plants and sconces add a finishing touch to the room. 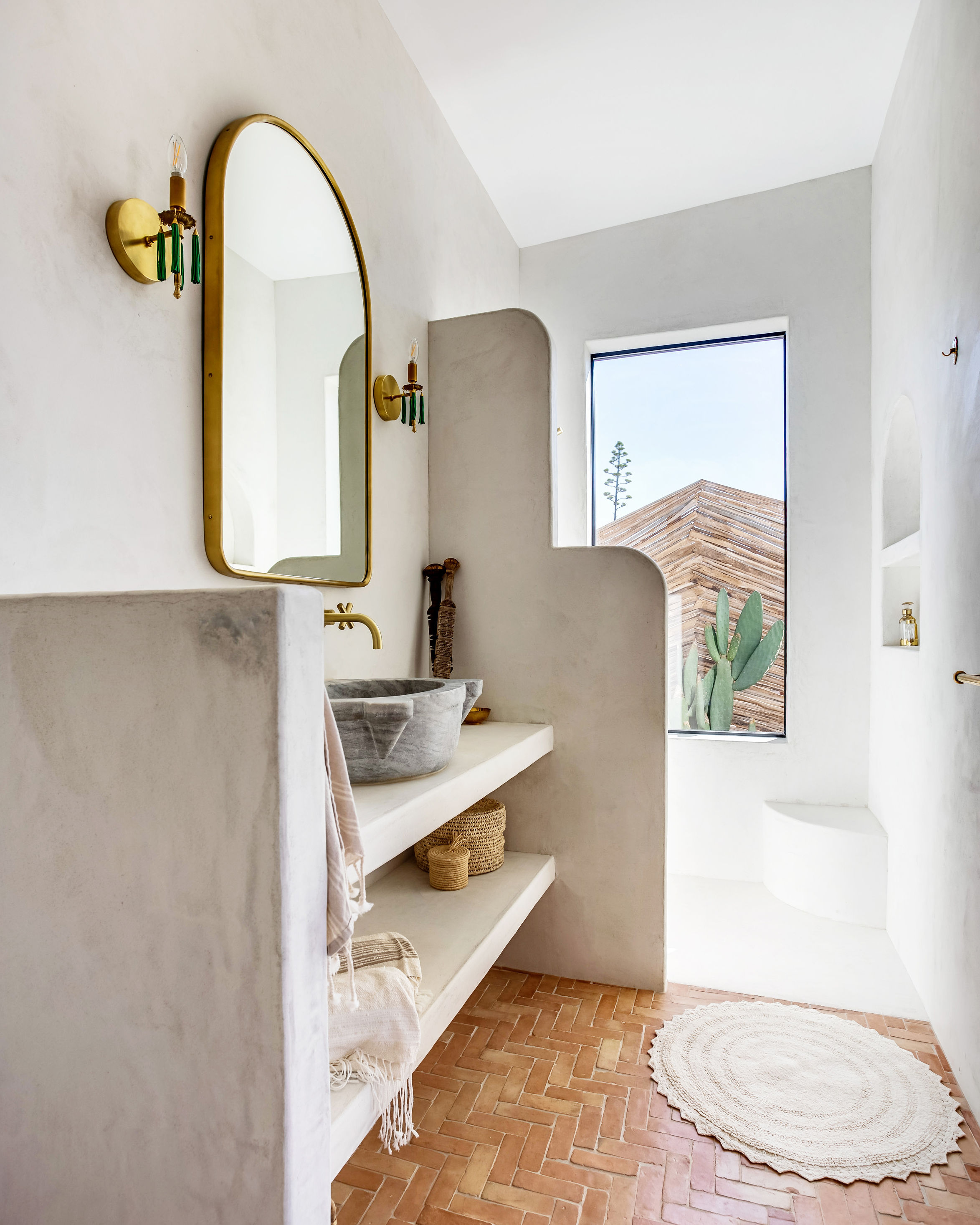 The master bedroom has its own ensuite bathroom, with a walk-in shower and tadelakt (Moroccan plaster) throughout. The floors have Moroccan terra cotta tiles that the couple shipped back to the States from a trip to Marrakech, while the sink is a 100-year-old Turkish hammam basin.

Building the tadelakt vanity and shower in Joshua Tree proved to be a bigger challenge than expected. “It had to be sprayed with water twice a day for four days after application to prevent cracking, as the desert is so dry,” says Saunders.

The large window frames the cacti gardens, which have a privacy wall behind them made of saguaro cactus rib. The second bedroom has a built-in, made-of-plaster bed frame and side tables. The couple had to measure and determine everything about the built-in bed early on, which was a worrisome move. “Because it was the same material as the flooring, any later fixes would have been nearly impossible,” says Saunders.

The arched closet entrance is an homage to Morocco, and an attention-grabbing one at that. The closet interior is painted green to tie in with the bedding, and curtain doors help soften and balance the room. The main house bathroom is just across the hall from the second bedroom, featuring tadelakt walls and vanity and another 100-year-old Turkish basin. The couple bought Moroccan brass at a hardware store in Marrakech for the door lock, hooks, and towel rack in the room, all of which goes well with modern brass mirrors, tapware, and sconces. Once again, the bathroom has a large window looking into a cactus garden with a privacy window as the backdrop. But it’s not even the couple’s favorite part of the room.

“Our favorite feature is the arched wall we built to separate the large bath from the rest of the bathroom. You step through the arch, open the curtains we brought back from Morocco, and your built-in bath with cactus garden is awaiting,” says Saunders. The backyard features plenty of seating areas, along with a pool, hot tub, and firepit. The couple strategically placed boulders around the hot tub as easy seating for nighttime stargazing, and the swimming space’s design was inspired by Moroccan riad pools.

Saunders worked with Australian landscape designer Mon Palmer for insight on how to lay out the backyard, and to design a larger landscape plan that the couple is excited to implement later on. 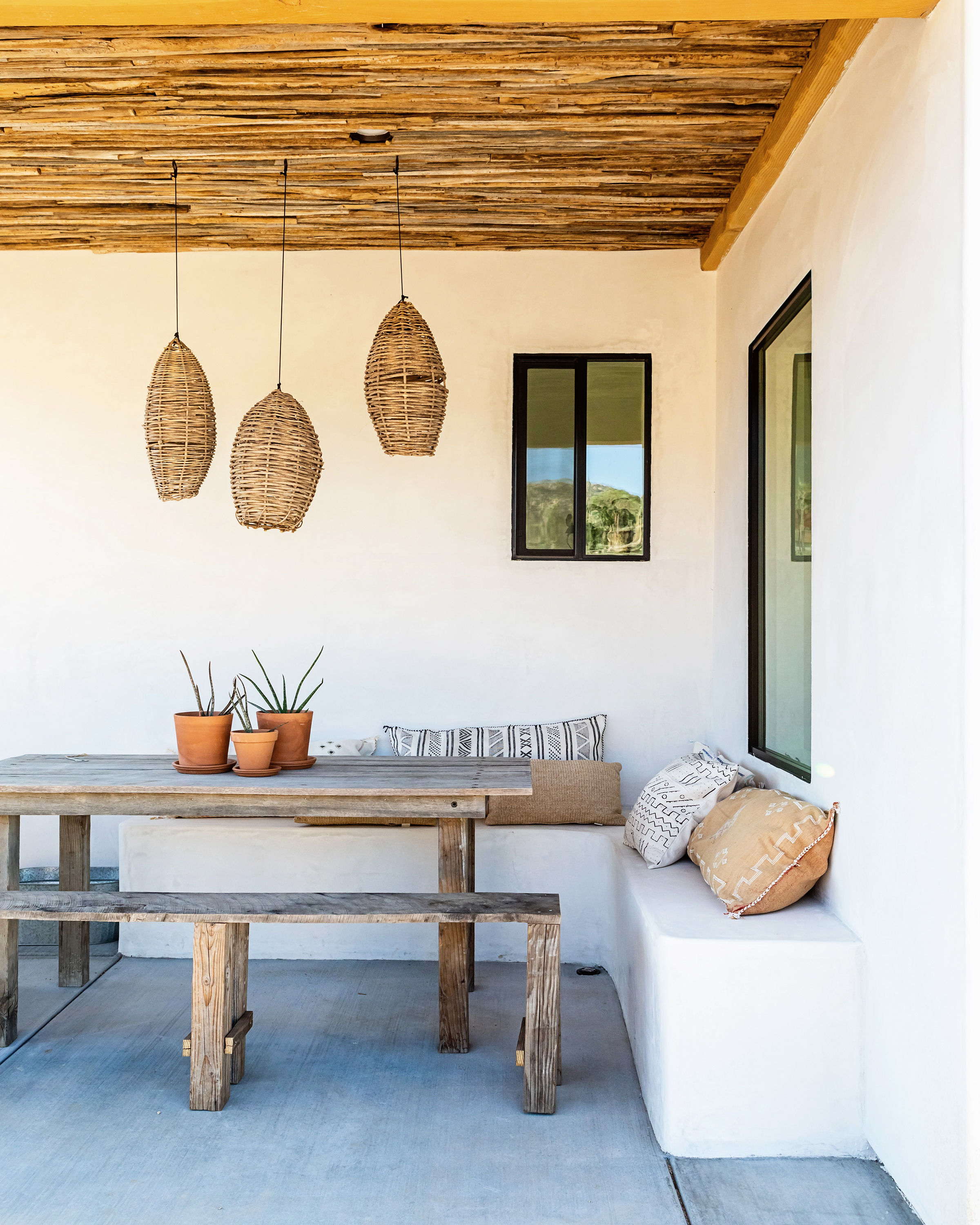 The backyard dining space has similar features to other parts of the home—built-in seating, Moroccan pillows—along with pendant lights the couple brought back from their travels in Mexico. The couple made the dining table out of reclaimed wood.

On the other side of the backyard is another seating area, strategically placed with the sun in mind. “It’s shaded after 11am, so it’s perfect for laying by the pool without having to be in the sun,” says Saunders. This Moody Big Bear Cabin Is a Dreamy Urban Escape

A Modernized Cliff May Ranch Home Gets Colorized