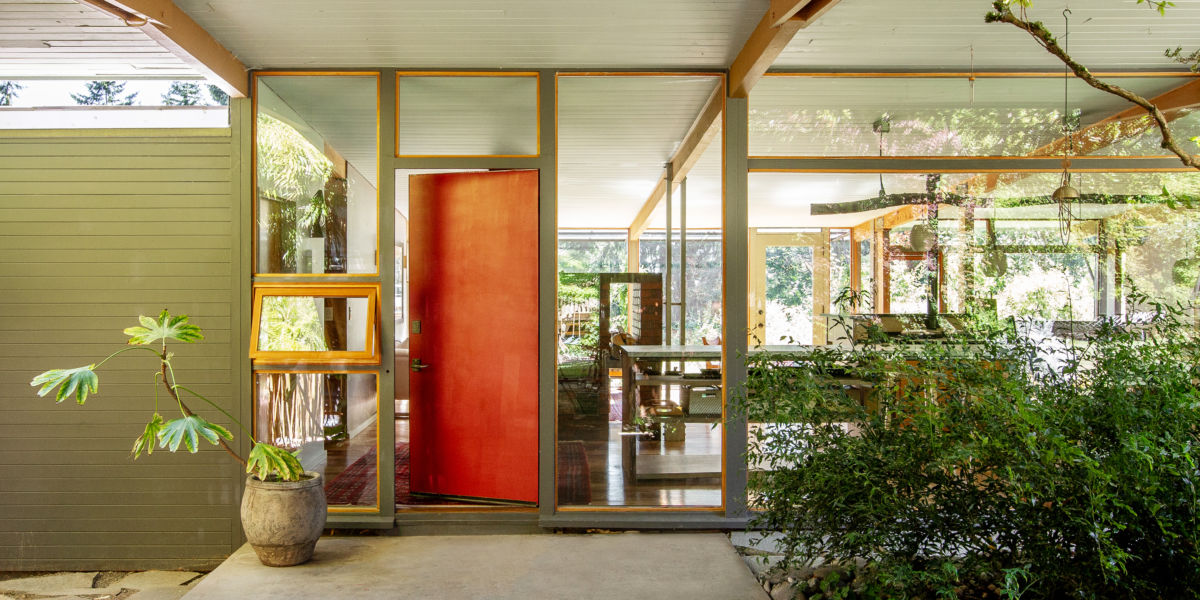 Rafael Soldi
A custom red door opens to a light-filled kitchen and living area, designed with floor to ceiling windows—a priority in the Pacific Northwest where light can be scarce.
Written by Christine Lennon March 18, 2021
Share this story

There’s a neighborhood called Hilltop in Bellevue, across Lake Washington from Seattle, which was developed in the late 1940s by a group of architects in search of post-war American utopia. Forty houses on forty acres—which sold for $250 apiece—and views for miles—it was the ideal spot for local visionaries like Wendell Lovett to make their mark, designing modest and thoughtful homes with clean lines, simple materials, and massive windows to let in as much light and nature as possible. Sixty years later, their dream is still alive, thanks to a community of homeowners, like Nick and Kasey LeClercq, who are committed to preserving their dream.

The LeClercqs hired architect Robert Hutchison to update the home’s footprint for their growing family, solve a layout puzzle with a small addition, and update the bathrooms all while preserving Lovett’s original intentions.

“Nick and Kasey’s house is one of Lovett’s first. I’ve always been a big fan of his work,” says Hutchison. “He’s one of those architects who was able to move through lots of different eras and styles.”

“It’s a very simple design, basically a bunch of wood frames and a pretty open floor plan with bedrooms at one end,” explains Hutchison. “There was a large open space at the west end of the house and we could never figure out how it was supposed to be used. It was just a strange space. That’s the area that made sense for us to renovate and add the addition.”

“Nick and Kasey have great taste, and they challenged us, in a good way, to keep things as simple as possible,” says Hutchison. Nick is a contractor and woodworker, so the project was a true collaboration between the owners, the designer, and Lovett’s original plans for a low-impact home.

By adding just 300 square feet and re-imagining a large, open room that was largely unused by the previous owners, Hutchison created a family-friendly area with a kid-friendly bathroom and a contemporary-feeling playroom.

“The small addition completely altered how they use the house,” Hutchison says. “They have two small kids, and their rooms are separated by a bathroom.” The playroom will evolve into a homework and hangout space as the kids grow. They added a mudroom and extended the roof line in certain areas for a little more shelter from the elements.

There were a few original details that Hutchison felt strongly about leaving alone. The massive brick fireplace at the center of the house was one of them.

“They wanted to paint the fireplace and we encouraged them not to,” he explains. “It’s a constant discussion in remodel work, considering what should stay in a home and what needs to go. In this case, our client purchased this house because of its architectural qualities. There was never a disagreement about what we should save or change.”

Some other Lovett touches that remain intact: The horizontal exterior siding, natural wood frame windows, the solid panel front door, a support column that was split into two components to make it seem airier, and a few of the original windows.

In the northwest corner of the house, Hutchison and the LeClercqs got a “little more playful,” says Hutchison. Kasey gave the simple white-tiled bathroom a jolt of color and pattern with animal-themed wallpaper from Flat Vernacular.

One of the many things Hutchison likes about this project is that when he goes back to see it, he can’t always remember what he did to the house.

“I look at the roof and I can’t remember where the original line was,” he says. “The house is so simple that it can absorb some of the alterations done by previous owners, and you can get past it. But it was important to me, and to the owners, to keep it as thoughtful and true to the original as possible.”

11 Beautiful Dining Rooms and Breakfast Nooks to Get Inspired By