Flowers perform the most important function of reproduction 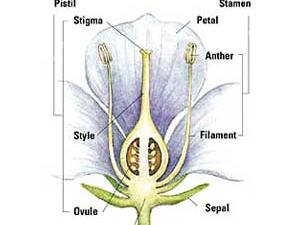 Angiosperms are the large class of flowering plants that bear seeds enclosed within fruits. The seeds of angiosperms contain either one or two cotyledons (seed leaves), which provide stored food for the germinating seedling. The majority of garden plants have two seed leaves and are called dicotyledons (dicots for short). Among the dicots are such diverse plants as maple trees, cabbages, and roses. Numerous other familiar plants have only one cotyledon and are called monocotyledons (monocots); among these are lilies, irises, palms, and grasses, including cereal grains such as wheat, oats, and rice.

In contrast to angiosperms are gymnosperms, the class including conifers and cycads. Gymnosperms do not bear flowers, and their seeds are naked–that is, not enclosed within fruits. They have many seed leaves.

Gardeners cultivate many plants primarily for their flowers–but to botanists, a flower is simply a plant’s reproductive unit.

Most flowering plants bear perfect flowers: blossoms containing both male and female reproductive parts. In the minority are plants with separate female and male flowers, borne either on the same plant–as in corn, walnut, and squash–or on separate ones, as in asparagus, holly (Ilex), and willow (Salix).

Some flowers contain the reproductive structures and nothing more, but many are so-called complete flowers: they contain the essential male and female parts as well as accessory structures such as petals and sepals. Though blossom form varies widely among flowering plants, all flowers share a basic structural plan, and the structural elements always appear in the same order.

Sepals make up the outer ring of floral parts; collectively, they are called the calyx. They are often green in color, though some flowers (fuchsia and iris, for example) have brightly colored, petal-like sepals.

Petals form the next circle of flower parts, just inward from the sepals. If a blossom is showy, chances are it’s the petals you notice. Petals may be separate, as in camellia and rose, or united in a tubular, cupped, or bell-like shape, as in rhododendron and petunia. Collectively, the petals are called the corolla; corolla and calyx together are known as the perianth.

Stamens, positioned inward from the petals, contain the male reproductive elements. A typical stamen consists of a slender stalk, the filament, topped by an anther, which is usually yellow in color. The anther contains grains of pollen, the male element needed to fertilize the flower.

Pistils, found in the flower’s center, bear the female reproductive parts. Each pistil typically consists of an ovary with a stalklike tube (the style) rising from it. The style is topped by a stigma, which receives the pollen. The ovary contains one or more ovules; following pollination and fertilization, these develop into the plant’s seeds.