How to Divide Bulbs 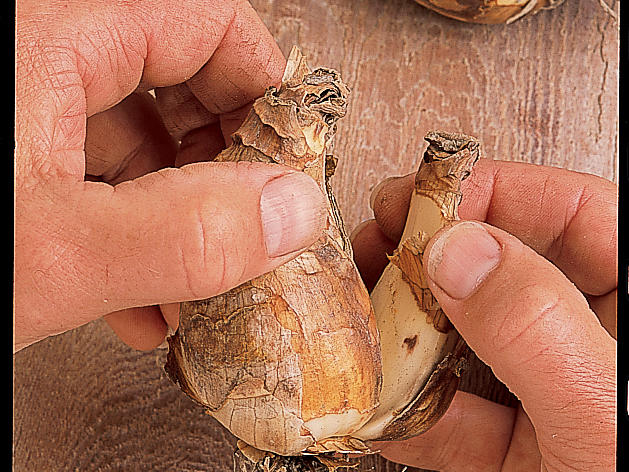 If an established bulb planting has begun to bloom sparsely, the cause is probably overcrowding—and that means it’s time to dig and divide.

You’ll also need to divide bulbs if you want to make more plantings of a favorite kind. Because each of the five bulb types increases in a different way, techniques for division differ as well.

To divide true bulbs, carefully break apart the parent and the increase (smaller bulb) at its base. To divide lily (Lilium) bulbs, remove outer scales from the basal plate, dip the ends in rooting hormone, and plant.

Corms renew themselves each growing season by producing a new corm and (sometimes) small cormels on top of the old corm. To divide, separate healthy new corms and any cormels from the old corms.

Tubers increase in size and in their number of growing points as they age, but most of them don’t form separate increases. To divide, cut a large tuber into two or more sections, making sure each has a growing point.

Rhizomes produce new plants from growth points along their sides. To divide, break the sections apart at the natural divisions between them; be sure each division has at least one growing point.

Tuberous roots form multiple growing points. Some, like daylily (Hemerocallis), form separate plants that can be pulled apart; this is usually done in summer or fall, when the plant is growing. Others, like dahlia, do not separate as easily. To divide the latter, cut clumps apart so that each root has a growth bud; do the job before planting in early spring.

How to Divide Bulbs