Tips and techniques for encouraging growth and maintaining control 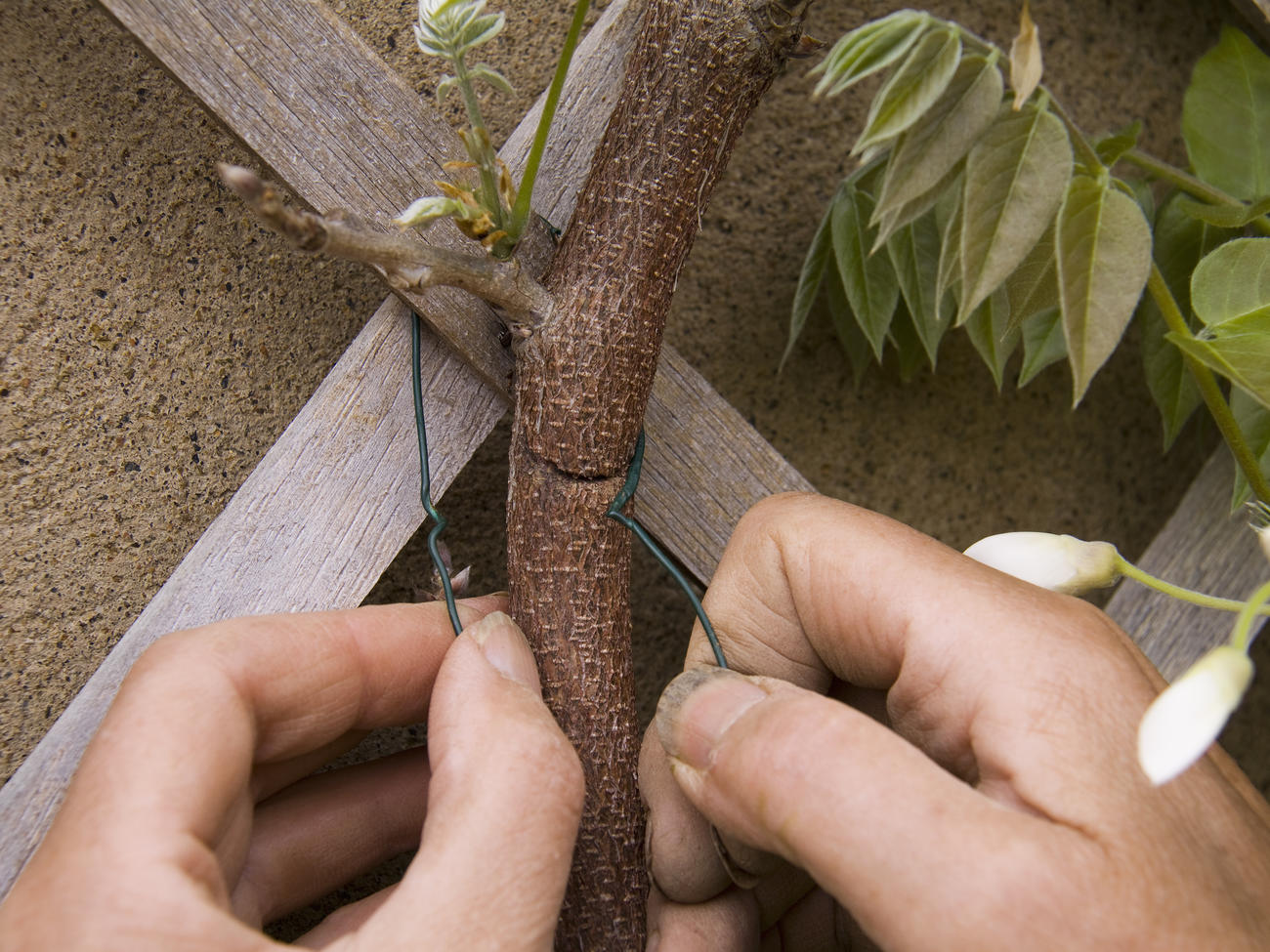 Saxon Holt
The stems of vigorous twiners like this clematis tend to become snarled. Often the best way to sort out the problem is just to snip through the tangles. Resultant dead growth will be easier to identify and remove later on.
Written by Sunset September 20, 2004
Share this story
Until a vine gets a firm hold on its support, you may need to tie it in place with twine or plastic garden tape. (For heavy vines, you can use thin rope or strips of canvas or rubber.) For clinging vines, you might tack plastic mesh over the stems until you see the aerial rootlets or holdfast discs adhering. Once the stems of twining and scrambling vines gain some length, you can weave them through any open work support, such as a trellis or wire fence. To encourage bushy growth on young vines, pinch out the stems’ terminal buds. If you want just a few vertical stems, though (for a tracery of growth around a column, for example), don’t pinch. Instead, remove all but one or two long stems at the base.

Once a vine is established, you’ll need to prune it periodically to keep it in bounds or to clear out unwanted or dead growth. The job is often done late in the dormant season, just before new growth begins, though you may want to wait to prune early-spring bloomers such as Carolina jessamine (Gelsemium sempervirens) until flowering has finished. Some vines are so vigorous they can be pruned at any time. Vines that twine, climb by tendrils or coiling leafstalks, or scramble are pruned by similar methods. Start by removing dead and damaged growth. If the stems are so tangled that can you can’t tell what to remove, snip through the mat of stems here and there; later on, remove those that have died. If the problem is really severe–if the vine is such a haystack of growth that you can hardly find the support, for example–make heading cuts low enough to reduce the vine’s length by half. Once you’ve done that, you can usually untangle the stems and make thinning cuts to remove unwanted growth at ground level. As a last resort, cut the entire vine to the ground in late winter or early spring and start training it all over again. Clinging vines need regular monitoring. If you don’t keep them under control, they’ll crawl under eaves and wood shakes, causing structural damage; if removed, they’ll take paint and plaster with them. Prune out any stems you see extending into eaves, windows, shingles, and so on. Once every few years, prune more extensively: cut out wayward branches and any that have pulled away from their support (once aerial rootlets and holdfast discs have come loose, they won’t reattach). Cut branches away from windows and doors; reduce the bulk of protruding or unruly growth.