Create your own secret hideaway 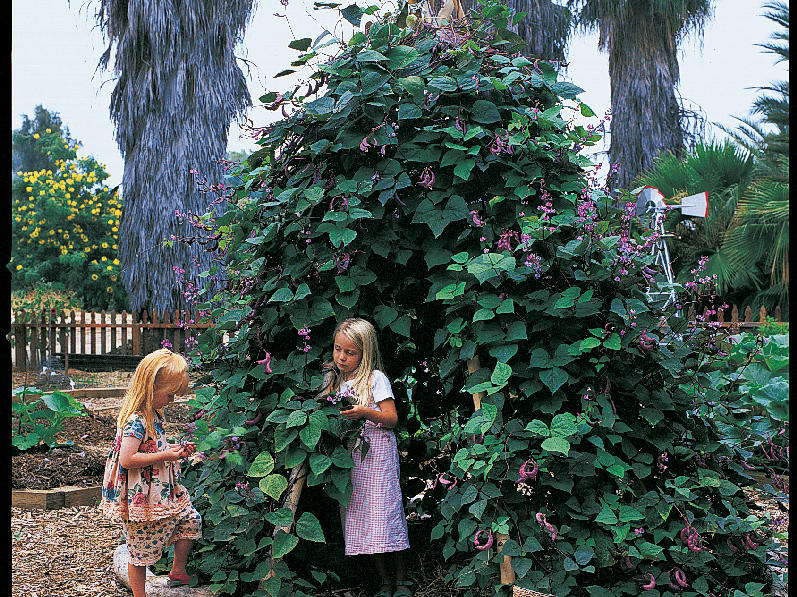 The leafy tepee shown here is the favorite hideout in the Children’s Garden at the Fullerton Arboretum in Fullerton, California.

“Kids want to get inside the minute they spot it,” says Joyce Toy, an arboretum volunteer. Grown-ups need a bit of coaxing. “They hang back until their kids pull them in, but they always come out smiling,” says Toy.

Be adult about it, we say. Admit you can picture yourself under these leaves—sitting cross-legged, palms up, practicing your mantra perhaps. Or in a beach chair with Puccini on the headset and a perfectly shaken martini in hand. Or curled up in an Indian blanket, sneaking a snooze. Pick your pleasure. Don’t you deserve your own tepee?

• About 60 feet of sturdy hemp or jute twine

1. Line up poles on the ground, alternating thick and thin ends. Pull the second, fourth, and sixth poles to the right, until only 2 feet of the six poles overlap in the center.

2. Fasten a 10-foot length of twine to the first pole by tying a sturdy hitch or knot. Loop the twine loosely around all six poles three or four times, allowing some space between poles (left).

3. Secure the loops by binding twine around them at right angles, weaving it between the poles (left). At the final pole, fasten off the binding by tying a hitch or knot.

4. Pick up the poles and spread them in a circle—arranging poles so that the six thin ends cross at the top—to form a tepee with a diameter of about 8 feet. Allow extra space between the two poles that will frame the entrance.

1. String clothesline horizontally around the tepee at 1-foot intervals, except at the entrance (left). As you work, wrap the clothesline once around each pole and give it a tug to take up the slack.

2. To complete the grid, attach two or three lengths of twine vertically to the clothesline between pairs of poles.

Sow seeds directly in well-cultivated soil around the circumference of the tepee, except in front of the entrance. Train the vines up the poles and the twine. It takes about two months for the vines to cover the whole tepee.

How to Make a Kids’ Tipi Playhouse

How to Create the Ultimate Backyard Fort