Would the real Queen bee Aurora please stand up?

It was pretty quiet around here before the long Labor day weekend.  Margaret had taken the day off; Brianne and Erin were leaving early. ... 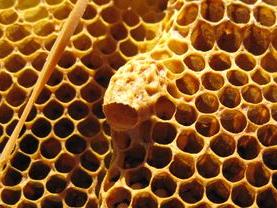 It was pretty quiet around here before the long Labor day weekend.  Margaret had taken the day off; Brianne and Erin were leaving early.  But Aurora still needed us.

As advised by Tina and Thomas Keller when we welcomed Queen bee Aurora, we didn’t want to leave the original box the swarm came in on the hive over the weekend. The foundationless comb was now empty of eggs and larvae and we would have a big sticky cross-comb mess on our hands soon.

In the early afternoon heat, I went out to Queen beeAurora’s hive and rotated the boxes so that the box containing the original swarmcutout was the top box. This gaveme access to the foundationless comb. I put the queen excluder between the boxes so Aurora wouldn’t escape thebottom box.

Tina and Thomas had suggested we shake Aurora’s worker beesinto the bottom box and remove the top box altogether because winter is almostupon us and Aurora isn’t likely to need a second box. So I began.

I shook the first frame; I shook the second. I got to the fifth frame and just as I was about to shake it, I saw … a QUEEN BEE! And EGGS! What?!! I asked myself, “How did Aurora get up here?” I was so confused.

Not wanting to remove the queen from the hive, I left thatframe in the top box and put in empty foundation frames, removed the queen excluder, closed up the hive, and went back into the office .

I emailed Tina to say it seemed Aurora had somehow made itthrough the queen excluder and was laying eggs in the top box! She immediatelywrote back to say it probably wasn’t Aurora, but rather a new queen the workersmade with an Aurora egg because they thought Aurora had gone AWOL. Oh, yes. That made much more sense. Silly me. And now that I allowed myself to think, I did remember seeing a queen cell on that fourth frame. 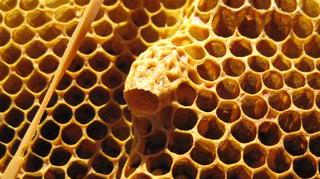 Shoot.Now wepresumably had two queens in one hive, with no queen excluder. They were sure to battle it out over the weekend until only one remained. Poor queen bee.

But Tina needed a queen!She offered to come over to take home our newest queen, Aurora Junior. Hurray!

I found a picture of Aurora on my computer and printed itfor reference. We didn’t want Tina taking home Aurora, just in case she really was the only queen bee in the hive.

Tina arrived just before 5pm.It took a while, but we found the queen bee I had seenearlier, still on that same frame.And she didn’t look like Aurora. 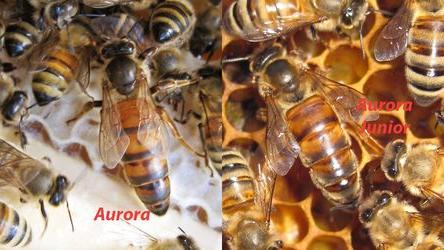 Tina borrowed the hive box full of empty frames and theframe with the queen, a hive cover and bottom board, taped them up and put itin the back of her car to take home.She has reported that she combined themwith one of her queenless hives and Aurora Junior is doing well. 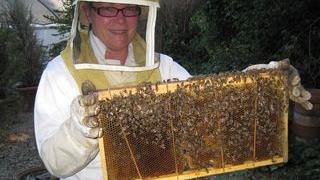 We are grateful for Tina. We have saved a queen.