What Is Ruby Chocolate? The Perfect Pink Treat Makes Its Way out West

And yes, it’s naturally pink. No additives or dyes here! 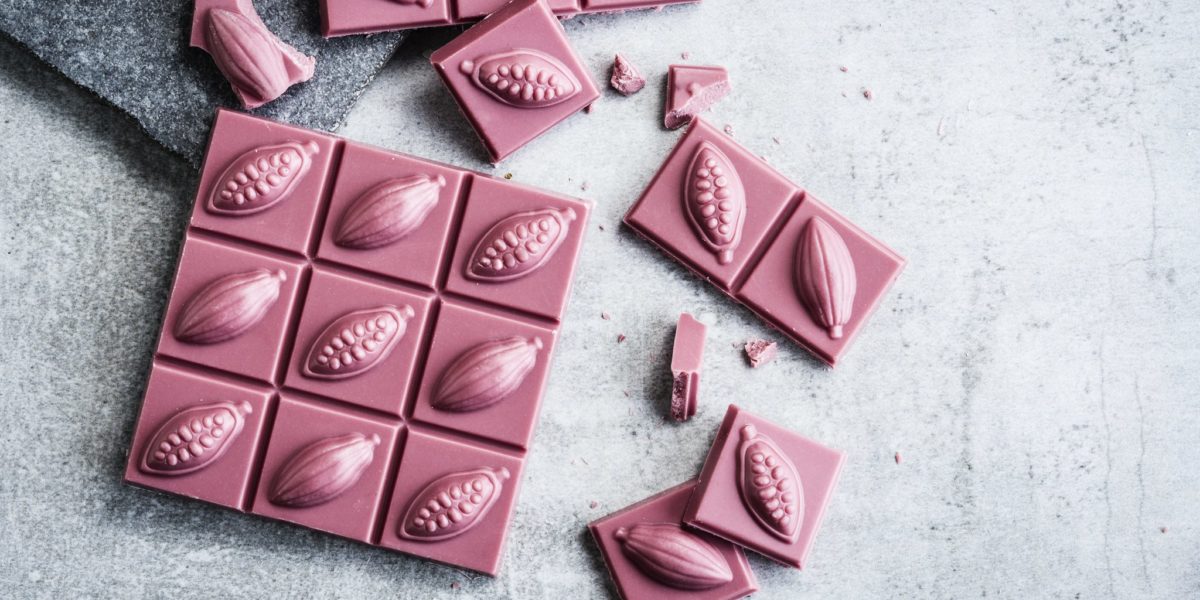 Pink things are an undeniable passion of mine. My apartment is accented with hue lights set to “perfect pink” and my kitchen dining table is finished with fuchsia paint that’s been sanded down to a rosy shade. So when I heard there was a new chocolate on the market with a natural pink hue, I had to see what the commotion was about.

“I had a preconceived idea of what I thought it would be and was pleasantly surprised to learn otherwise,” Chuck Siegel, owner of Charles Chocolates, tells me about ruby chocolate, the newest category of the confection since the introduction of white chocolate more than 80 years ago.

Siegel’s first impression of ruby chocolate was that it was some kind of white chocolate with added flavors and dyes. In actuality, ruby chocolate is naturally bright pink and made from ruby cacao beans. One of the largest global producers of chocolate, Barry Callebaut, is the only ruby chocolate producer and worked for over 10 years to create the recipe. “Barry Callebaut’s cocoa experts discovered that unique components, naturally present in some cocoa beans, can yield an exceptionally red-pink color and fruity taste with a specific production process,” says Elizabeth Clair, senior manager of customer and industry relations at Barry Callebaut.

Ruby chocolate first became available in the United States in 2019, so it’s not so easy to find across the West. However, some makers are working alongside Barry Callebaut to create brightly flavored and uniquely colored confections within the new category of chocolate. “What’s really fantastic about ruby chocolate is its popularity across the globe, including the West Coast. Its appeal isn’t limited to certain regions,” Clair shares.

Barry Callebaut recruited Charles Chocolate, for one, to experiment with the new chocolate after its introduction overseas in 2017. “It was launched in several other continents before the U.S., and we were able to develop three chocolate bars” before its arrival in America, Siegel says. As a self-taught chocolatier, Siegel creates unique flavor pairings in his San Francisco shop and retails his confections nationwide at specialty grocers and boutiques. His bars featuring ruby chocolate include flavors like strawberry, raspberry, and cacao nibs.

To learn more about the new category of cocoa, we chatted with Siegel about his experiments, apprehensions, and flavor combinations, and we gathered a handful of bars from Western makers so you can taste it for yourself.

What Actually Is Ruby Chocolate?

The petal pink chocolate isn’t going to resemble the chocolates many of us are used to, such as white, milk, or dark chocolate. It has a flavor profile all its own that is somewhat fruit-forward and has a bit of tartness with subtle chocolate notes throughout.

The fruity flavors of ruby chocolate don’t pair well with the same complementary flavors we usually see combined with chocolate, like strong nuts and caramels, Siegel says. To figure out what to blend ruby chocolate with, Siegel tested a variety of combinations before landing on freeze-dried fruits.

“We have a bar with roasted pistachios and freeze-dried raspberries,” he tells us. “We also make a cocoa nib brittle, which is mixed into ruby. The nibs are made of regular chocolate because I don’t have access to ruby cocoa nibs, so it’s a fun play on combining what we knew of chocolate with this new fourth chocolate.”

Where to Buy Ruby Chocolate

Ruby chocolate has been made into a special edition KitKat available throughout Japan (one of the countries where it first launched) and through certain online retailers, though some Western makers are also putting their own spin on the new chocolate.

“Chocolate is one part nature, one part science, and one part art,” Clair tells us. “Chocolatiers may have formal culinary or food science academic credentials or informal training galvanized by a deep love of the product but what unifies all of our customers is their creativity and their startup mentality.”

Below, find a handful of ruby chocolate bars made right in our own backyard. Some have additional flavors like pistachios or passionfruit, but we’ve also found pure bars that allow you to taste ruby chocolate on its own.

This simple bar from Chocolove is a great way to understand the flavor profile of ruby chocolate without added flavors or ingredients like fruits or nuts.

Once you’re familiar with ruby chocolate, you can dive into filled bars like this one with ruby cacao and grapefruit ganache.

For an even more fruit-forward flavor, this bar combines zingy passion fruits with smooth ruby chocolate to create a zesty and slightly sweet bar that’s a perfect palate-cleansing, sweet bite.

This bar of ruby cacao swirls in cocoa nibs from regular chocolate that have been made into a sweet brittle. The brittle adds crunch and a slightly bitter flavor that pleasantly offsets the slightly sweet ruby cacao.

In this ruby cacao bar, Charles Chocolates combines ruby cacao with freeze-dried strawberries to add some texture to the ruby cacao, which has a smooth mouthfeel.

3 Surprising Ways to Use Cocoa Powder