Okay, not all of us are going to have access to the kind of restaurant-caliber cured meats that Pollnow makes weekly for his charcuteri... 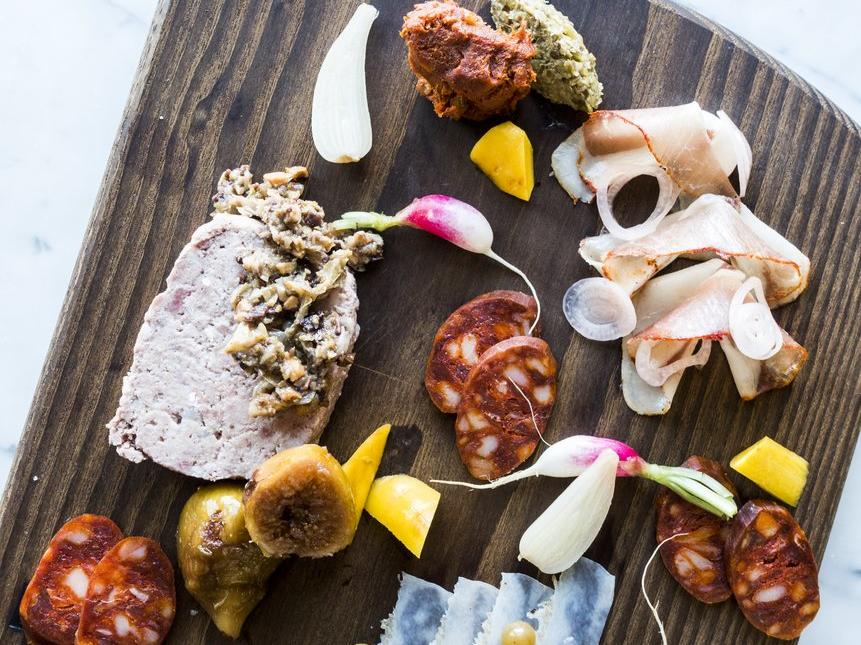 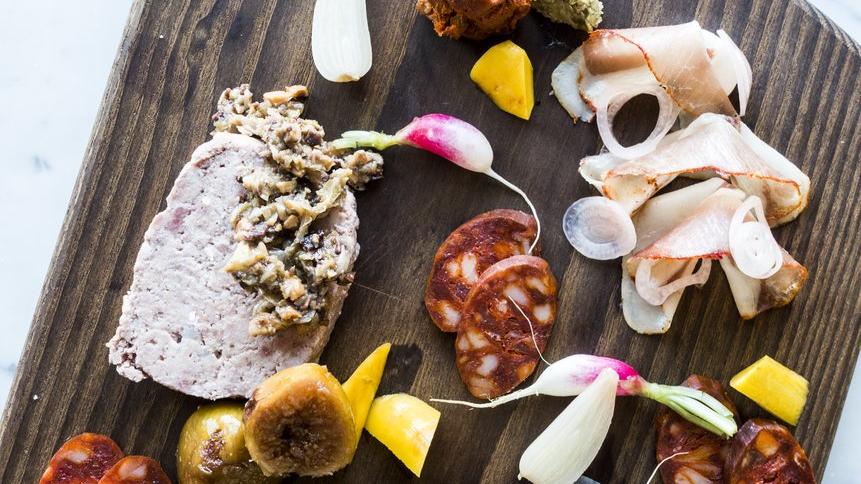 Okay, not all of us are going to have access to the kind of restaurant-caliber cured meats that Pollnow makes weekly for his charcuterie plate at Aatxe, his San Francisco restaurant. But even if you’re using salami and cold cuts, you can still make them look and taste exciting. It’s a matter of keeping a few basic principles in mind.

During a photo shoot with Pollnow for a story about tapas—delicious little Spanish bar snacks—I watched, mesmerized, as he put together a charcuterie plate for the table. It was so artful that I had to ask him, right then and there, to describe what he was doing, and why.

1) Choose wood for your plate or platter. “It’s warmer than ceramic, and rustic. Also, it doubles as a cutting board.”

2) Leave enough room around the spreadable and soft items. Right after this photo was taken, Pollnow added a small knife next to the terrine, the spoonful of sobrassada sausage at the top, and the delicate lardo slices.

3) Consider a sense of movement. Pollnow arranges the sliced pork tenderloin into a curl, with the fat side down so it sticks to the board. “It’s prettier, and easier to pick up.” The lardo slices move upward on the board and are scattered with a tumble of grapes—which also helps liven up the plate.

4) Mix textures and colors when you pick which meats to serve. Here he’s chosen chewy cured dark-red chorizo, melt-in-your-mouth white lardo, rosy and dense pork tenderloin, a pinkish spreadable terrine and russet-colored sobrassada. You might choose, for instance, a good salami, a pâté or a terrine, good mortadella, and some prosciutto—all of which have different colors and textures.

5) Contrast fat and salt with acid — and sweet or spicy—when it comes to accompaniments. “For the lardo, we wanted something really sharp, so we pickled grapes and added those. I’ve also added pickled carrots, ramps, and shallots to go with the lomo and chorizo.”

6) Also, contrast soft with crunchy. “The terrine has a sherry-almond relish. I like how the coarse texture and crunch of the almonds works against the texture of the terrine.”

7) Add something fresh. “With all these assertive flavors, I like to have a bit of freshness, so I added a few raw French breakfast radishes.”

Even if you’re serving just one thing, make it exciting. “Put out some country pâté with cornichons (sour cucumber pickles) and mustard. Fat and salt always work well with acidity—and sweet or spicy. Once you have that concept in mind, you can plug and play.”