By Margaret Sloan, Sunset Production Coordinator In a state of near panic after finding ants attacking our bees, we applied Tanglef... 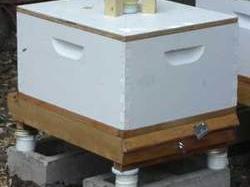 In a state of near panic after finding ants attacking our bees, we applied Tanglefoot to the cinderblocks holding up the hives.

We were right in one respect: Ants won’t cross Tanglefoot because they get stuck in it.

The thing is, bees may be marvelous in many respects, but around Tanglefoot they’re as dumb as (forgive me, Team Chicken) a hen in a pen. Those poor bees bumbled into the sticky mess and struggled to free themselves, only to fall to the ground and die in a clot of Tanglefoot coated with dirt.

For some reason, lots of drones were trapped. What are they doing out of the hive? Is there bee mating going on? We feared for the queen’s safety should she decide to step out for a quick “turn around the block” and come home sleepy and satiated and plow into the goopy, deadly Tanglefoot.

We were shattered; in trying to protect our colonies, we’d inadvertently done them more harm. Lesson learned: Sometimes no action is better than unthinking action.

We threw dirt on the Tanglefoot so it wouldn’t be sticky any longer, then called Randy Oliver for advice.

He came up with these nifty PVC legs capped with jar lids that are coated with Vaseline (you can see the line of deadly Tanglfoot on the cinderblocks). The ants can’t cross the petroleum jelly, and the bees won’t stumble into it. We hope.