Team Dances With Legumes, based on the San Francisco peninsula, came together long before this One-Block Party contest ever began—... 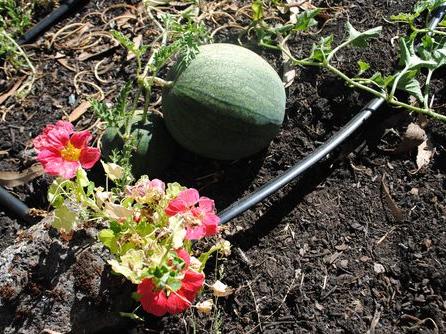 Team Dances With Legumes, based on the San Francisco peninsula, came together long before this One-Block Party contest ever began—back in the fall of 2008. Inspired by Sunset’s August 2008 story about our magazine’s efforts to grow an end-of-summer dinner, team leader Maryanne Welton and her friends and neighbors decided they’d launch their own series of grown-from-scratch dinners. For years now, this group of about two dozen people (kids included) have been getting together for regular seasonal feasts, using mainly what they’ve raised or made. They are having their big feast later today, and are all working hard right now to get ready. This post covers their final preparations. 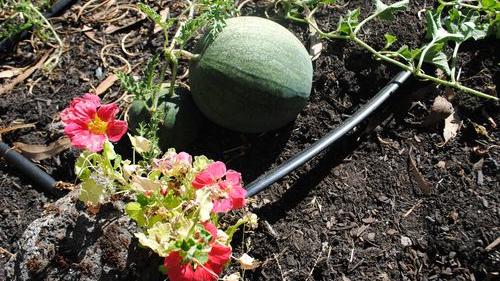 Melons and flowers, ready to dance at our feast.

The Dancers assembled in the studio this past week for the final practices and rehearsal before our harvest performance on Sunday. Some of us are returning from vacations to see what’s happened in our gardens while we’ve been gone, assessing our resources for the coming feast.  We’re licking our wounds as we see what nature (and man) threw at us during our absences.

The Descent of the Squirrels (and Other Noxious Pests) 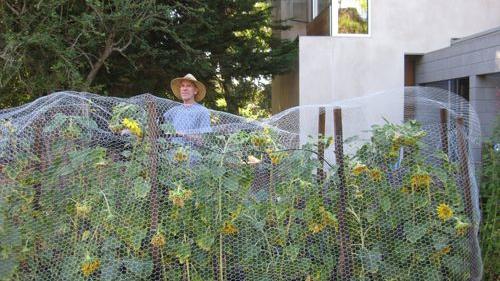 Kirk’s dedicated attempt to keep those furry monsters off our sunflowers. It didn’t work.

Kirk and I discovered that squirrels were able to breach the chicken wire cage around the sunflowers, chew through the stalk at each flower, and cart them all off. There are piles of sunflower-seed shells around the yard where they devoured them! All of us are cursing the squirrels for getting our squashes, apples, and the first ripening tomatoes. Nancy developed a noxious paste with fermented vinegar and hot spices to paint on her sunflower stalks, but it was too late for some of us. As for human predators: Julie, whose green thumb in her community garden plot nurtured many-yard-long squash vines, was chagrined to find that someone picked one of her musque de provence squashes while she was gone.

Dancers in the Kitchen 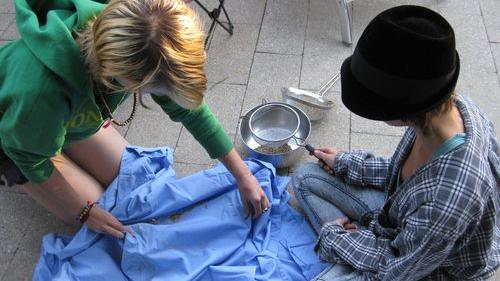 During the last week, some of us have been experimenting with both new and familiar additions to the feast. Cathi and I gathered sea water and made salt, and gathered and threshed black mustard seeds and made mustard. Interestingly, the “wild” mustard here is supposedly descended from seeds that Father Junipero Serra scattered as he traveled between missions up and down California. We popped a few in our mouths and chewed experimentally. They tasted like nothing, just  dry seeds. Then, as they moistened and broke down, they released their heat.  And they were really, really hot!

I ground the seeds into powder, added water to make a paste, and let it sit to heat up and develop its mustard flavor. After that I added lemon juice, honey, and salt. The pungency is supposed to mellow after it sits for a couple days. I hope so, as last night it was strong enough to send a Dancer spinning off the stage! We’ll see what type of zip it adds to vinaigrette and a sauce for salmon. It took over an hour’s labor to produce 1/3 cup of mustard. 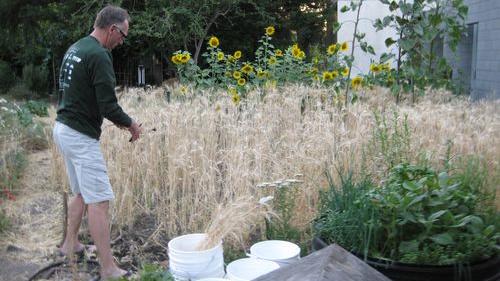 Kirk harvesting the wheat. Note the gorgeous, pre-squirrel-attack sunflowers in the background!

Our wheat has been drying for 2 weeks in buckets in the garage. Then Kirk threshed the stalks and separated the wheat berries by placing them in the bottom of a 5-gallon bucket, crushing them with the end of 4 x 4, and then using a leaf blower to blast the chaff out of the bucket. Who needs a winnowing basket and a gentle breeze when you’re a general contractor and have power tools? 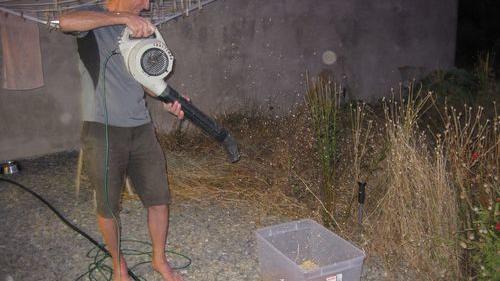 Kirk separates the wheat from the chaff, the modern way.

It took a little more time to pick out the berries still covered with their papery sheaths. In the end, we had over 12 pounds of wheat berries. We promptly cooked some up to try out a wheat berry salad with tomatoes, olives, and green beans. I’ll grind some to make bread and crackers, using a grain grinder passed down from Mormon members of my family who stock up barrels of wheat to feed themselves in case of disaster. 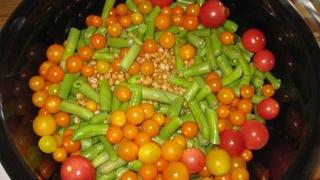 We shared the wheat berry salad dinner with the Lerches. Cathi brought a dish of her homegrown butternut squash, limes, and chiles, with a yogurt sauce to nap it. Delicious!  She also practiced making honey meringues. They were more like marshmallow puffs then meringues. As an alternative sweetener for the meringues, we’re going to try seeping stevia leaves in water to make a simple syrup.  I’m also hoping to gather wild blackberries and make a compote to go on top. We’ll see!

What’s Going on With Lucy? 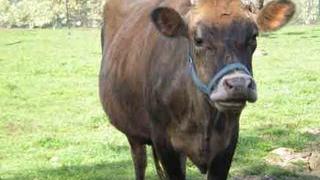 Lucy back in June, after tests showed
she was pregnant.

There is some doubt about whether the Jensens’ cow, Lucy, is really pregnant.  She certainly looks and acts pregnant, and a test confirmed she was in the spring. But the calf is overdue and her udder is not dropping—if it were, that would be a sure sign that of imminent delivery.  There aren’t many vets nearby with bovine experience, but the Jensens may call one in if the calf doesn’t come soon.

And of course, we want the final stage set to showcase all our efforts to best advantage. Nancy spearheaded the presentation of our butter, making little molds using shells, poppy pods, and eucalyptus buttons—pressed into food-grade silicon—and carving a beautiful, delicate butter knife out of manzanita wood. Nancy will also shepherd the troops to set up tables, linens, and dishes. We’ll use beeswax candles made by the Jensens. And maybe we’ll have a honey tasting, as many of us have beehives. 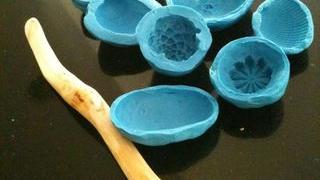 What it Means to Appreciate Your Food

This entire project really brings home how much labor is involved in producing everything we eat. Through the history of civilization, people have needed to maintain a balance between how much energy they used to gather, cultivate, and produce food and how many calories that food provided. If they expended more calories than they consumed, they’d starve. (The theory of “optimal foraging” was developed in the ‘60s to describe this process.) Industrialization changed the equation for most of the world, of course.

And yet, from the Stone Age on, humans also decided that certain things were worth expending a burst of calories. Who wouldn’t climb the tree to reach that perfectly ripe peach at the top?  Taking part in this One-Block challenge has enlarged my food production experience and has made me appreciate just what is involved in every bite we consume. I will no longer blithely whip together a simple vinaigrette—a combination of oil, vinegar, mustard, honey, salt and herbs—without a thought to what it took to bring each of those ingredients to my kitchen.

So, dress rehearsal is done, the performers and audience are set to gather, all the pieces are in place—or nearly so. Let the dancing begin! 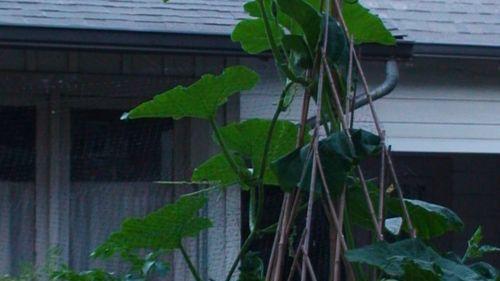 Squashes at the Jensens’. We’ll be eating their fruits—and everything else—soon.