Yesterday, Johanna brought us this amazing pak choi, more commonly referred to as bok choy, which she grew in Sunset’s test garden. I ... 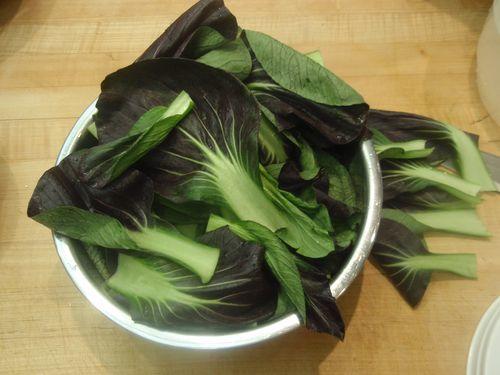 Yesterday, Johanna brought us this amazing pak choi, more commonly referred to as bok choy, which she grew in Sunset’s test garden. 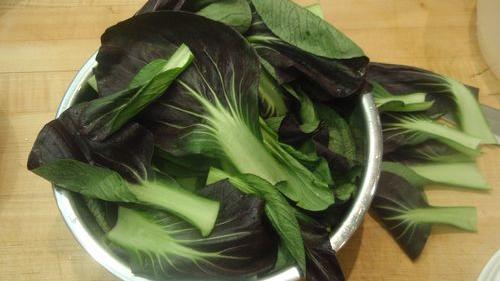 I love, love, love the color. I also love other purple vegetables, like purple asparagus and purple green beans. But I always find it slightly depressing when I cook with them and no sooner than they hit the heat, they lose their novelty color and turn back to the standard green.

I suspected that this would also happen with the pak choi, but thought I should at least try it once for confirmation. 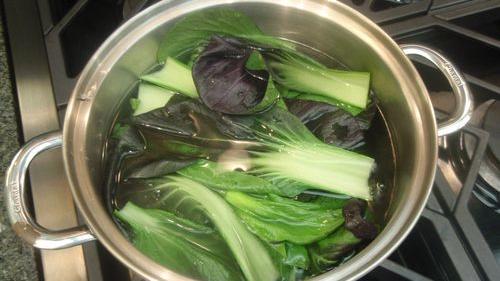 I cut off the ends to separate the leaves, then washed them in a salad spinner. Then I blanched the leaves and stems by dropping them into a pot of boiling water for a few seconds. When I strained them out, all the color was gone. 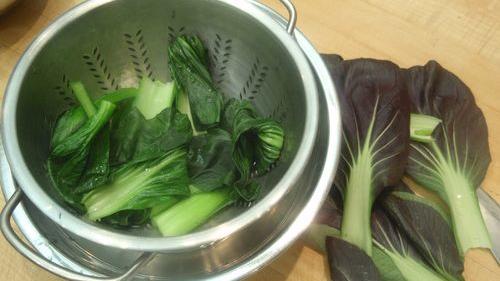 You can see that the cooked choi in the colander are bright green while the raw pieces on the counter are still their original purple color. Bummer.

Okay, so what if I want to keep the color? I guess I’ll have to use them raw. Which got me thinking about a raw kale salad with Asian vinaigrette that we made a few months ago and I could eat by the bucketful.

I washed the remaining pak choi leaves (about 4 bunches) chopped them into fairly large pieces, then added these other ingredients:

I tossed it all together and I have to say, I’m mighty impressed with how good it was. The kale version had been great, but the raw pieces were so crunchy that you almost had to marinate it for an hour to make it chewable. With this pak choi version, the leaves and stems are softer, so it’s ready immediately. 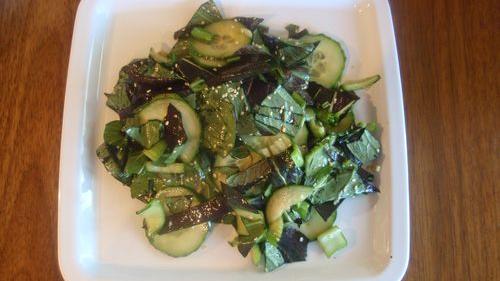 The best part is that you can still see the purple parts of the leaves, which gives a nice visual contrast. Yum.