Jumping for joy at the James Beard Awards 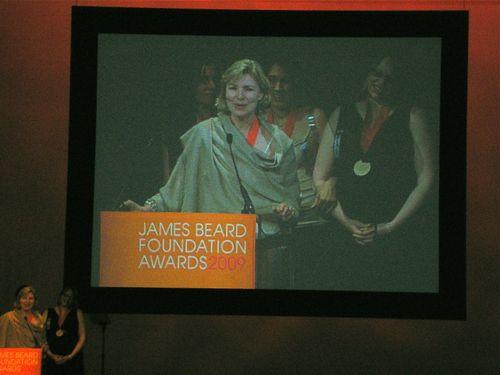 Last Sunday, Erika Ehmsen, Johanna Silver, Amy Machnak, and I sat in a darkened theater at the Millennium Broadway Hotel, nerves tingling. As some of you know, we’d been nominated—along with fellow one-block-diet bloggers Elizabeth Jardina, Rick LaFrentz, and Margaret Sloan—for a James Beard Journalism award.

Since we were sitting at a table near the exit sign, way way at the back, I was sure we wouldn’t win. After all, no one would put us here if we were actually meant to get to the stage in any reasonable amount of time. I gently suggested that everyone just relax and enjoy dinner and give up the dream of winning an award.

So we did, and got to know our tablemates—fellow nominee Hank Shaw; his wife, Holly; and his lovely mother–all come from Sacramento. Hank writes a very entertaining, knowledgeable, pull-no-punches blog called Hunter Angler Gardener Cook. Like us, he’s trying to show how possible it is for you to make your own food — from scratch. He tends to hunt and forage, we tend to garden and make wine, but the intention is very much the same. We felt glad to be sharing our table with a kindred spirit.

Then Kelly Choi, announcing the winners for the award ahead of ours (for Audio Webcast or Radio Show), accidentally opened the wrong envelope. “Erika Ehmsen, Elizabeth…” Oh, my lord. She’d flubbed, but we knew we’d won. Whoever got the Audio Webcast award, well, sorry, dude, our screaming completely drowned out your moment. Then we ran to the stage. (Ok, Erika walked. She’s pregnant and wise.)

Hank Shaw’s mother very kindly took this picture of us accepting our award: 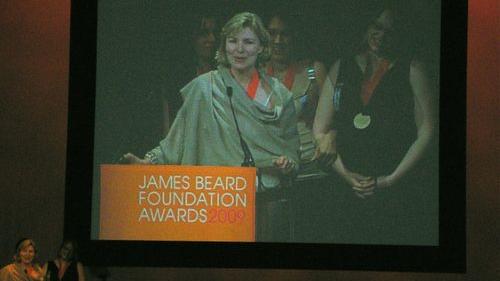 Left to right: Johanna, me, Amy, and Erika, beside ourselves with joy. And moments later, in the lobby: 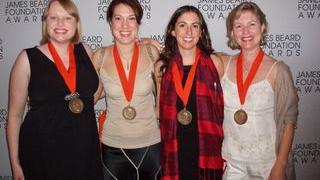 Courtesy Hanna LeeThe rest of the evening is a bit of a blur. Some very fine journalists won awards, including the multiple James-Beard award winner Alan Richman, of GQ magazine, and we cheered them all. For the full list, click here. Erika, bless her, was Tweeting like mad the entire time.

The next night, we put on our fanciest duds and went to the chef awards, at Lincoln Center. What a scene. We were quietly ushered around the red carpet, ah well. Amy’s shoes deserved to have a prance before the papparazzi! 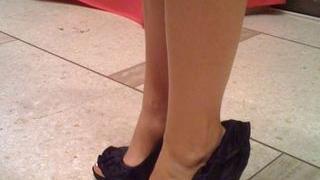 Amy’s shoes. Actually, she had to mince, not prance.The awards ceremony, which this year honored Women in Food, lasted three and a half hours, and although many deserving (and terrific) chefs won (including San Francisco’s Nate Appleman and Maria Hines of Seattle), we were as famished as wolves by the time it was over. We dashed out and devoured tidbits put out by some of the top female chefs in the country (my favorite: Anita Lo‘s steak tartare with anchovy broth).It was Quite a Scene. Besides the best and most celebrated chefs in the country, we spotted Salman Rushdie (we unabashedly had our pictures taken with him, on a camera that, alas, was lost at JFK).Amy, Johanna, and me in the thick of it.                                   Top Chef Jeff McInnis and Erika. 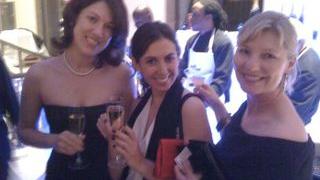 We had a very, very good time, piling happily into taxis for an after-party at Prune, Gabrielle Hamilton‘s tiny, excellent, jewel of a restaurant down in the East Village. (She’d been nominated for Best Chef New York City.) Gabrielle makes the best hamburgers EVER, intensely flavorful and so juicy they squirt.I remember the clock saying 3:30 when I closed my eyes.

Now, back we are at Sunset with all of us winners together, in front of the crazy-tall hops that we’ll be using in an upcoming batch of beer: 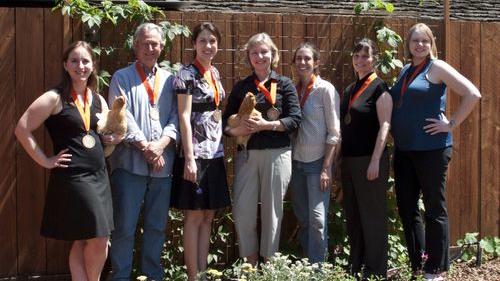 Left to right, Sunset’s Beard-winning bloggers: Elizabeth Jardina (with Honey), Rick LaFrentz, Amy Machnak, me (with Ophelia), Johanna Silver, Margaret Sloan, and Erika Ehmsen.and because they were part of it too…the very patient Honey and Ophelia, representing the coop: 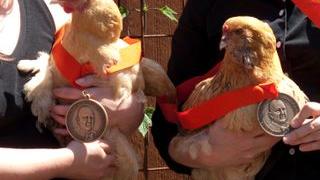