Leave it to Margo to want to grow crops I'd never even consider (like fresh chick peas). This time? Wasabi. She originally dreamed of it... 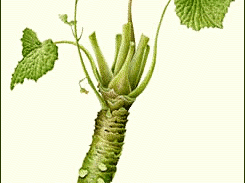 Leave it to Margo to want to grow crops I’d never even consider (like fresh chick peas). This time? Wasabi.

She originally dreamed of it being a part of this season’s springtime Japanese garden, but a quick bit of research revealed that it usually takes about two or three years to reach a harvestable size.

I thought that’d be enough to put the brakes on that idea. But then I remembered — this is Margo.

She’d been corresponding with Doug from Real Wasabi to figure out whether or not we could grow our own in the test garden.

The first thing I learned — listen up, plant nerds — wasabi is a perennial in the Brassicaceae family. WHAT?! Who knew? Non-plant nerds — that’s the same family as broccoli, cauliflower, kale, mustard, cabbage, turnips, and more. The botanical name is Wasabia japonica. I don’t know why I’m so surprised. I  mean, it actually makes sense when you think of it being similar to spicy mustard. It’s just always seemed so much more foreign to me than to be a trusty, old Brassica!

Next I learned that we really don’t have the right growing conditions. Doug relayed that wasabi likes to grow in shady,water-flooded gravel beds. It can be grown in soil, although the taste is “not as clean.” We have dry summers, and Margo agreed with me that we don’t want to create a flooding situation when it’s, frankly, a waste of water.

But this isn’t stopping us (Margo). We’re going to give it a try. And I don’t know why I’m pretending like I’m not curious. I am usually game to try growing anything once (like quinoa, the winnowing of which gave me an asthma attack).

Real Wasabi sells rhizomes this time of year. Soon baby plants will also be available for sale. We’re getting a few sent out early.We’ll put them in the shady spot, hooked up to drip irrigation. I guess we’ll see what an unclean wasabi taste means. Or maybe I’ll scour around the rest of the Sunset gardens to see if there’s any faux river-bed area that stays dark and damp. 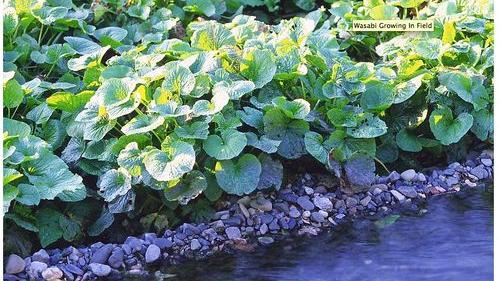 Wish us luck. Better yet — has anyone tried this? Stories (both success and failure) are much appreciated.