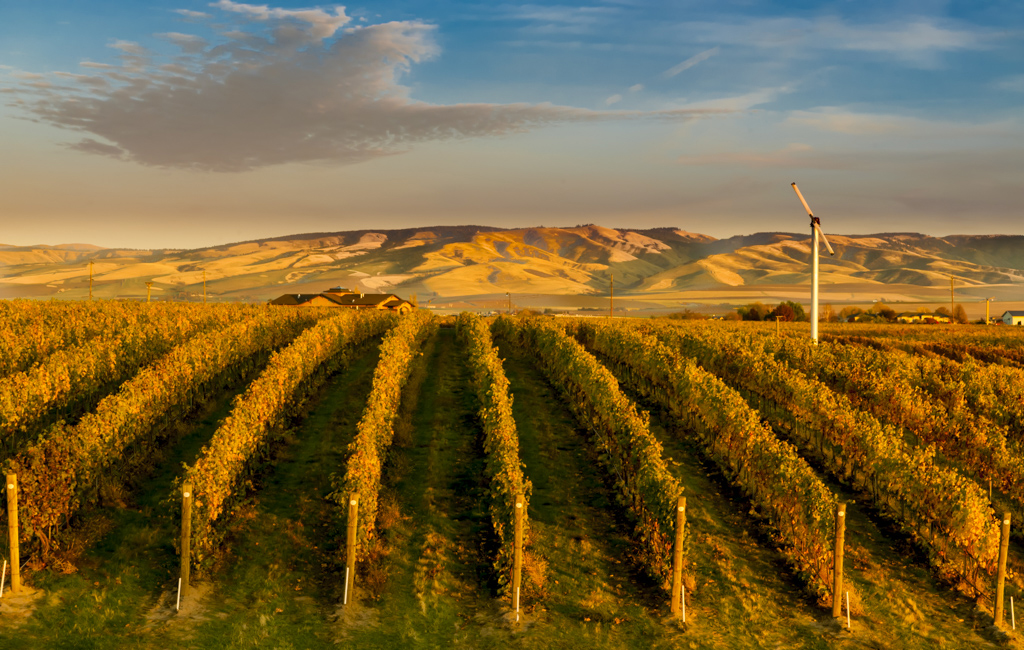 The group that’s headed back through the pasture from the riverside sauna to the roadside ranch house has some well-deserved leisure in mind―to say nothing of roast duck and a nice Syrah.

You might think they’re on a country vacation out here in southeastern Washington. But Pierre-Louis Monteillet was milking goats an hour ago (and 10 hours ago). And Joan Monteillet was sliding cheeses out of their molds. At midnight last evening in downtown Walla Walla’s old Dacres Hotel, Mike Davis was in the kitchen honing his two-week-old 26 Brix restaurant menu. Next door, his fellow tenant Michael Turner was stripping wood, readying his space to house Bodega Turner wines. And Holly Turner―half of that Bodega Turner project―was bottling at Three Rivers Winery, where, as winemaker, she has helped secure the reputation of Walla Walla winemakers as world-class craftspeople.

The talent and energy of these friends―and that of a bevy of food- and winemakers like them ―have taken hold in this old wheat-farming valley, making it a richer place to eat and drink than most urban centers. The Reader’s Digest version of the Monteillets’ story is romantic: Joan’s family farmed in the nearby Palouse; Pierre-Louis grew up in Millau, France. They met in Oaxaca, Mexico―she on vacation, he generally roaming. He followed her home, so she married him. Real life is always more complicated than outlines, of course. The details of renovating their four-hipped, century-old ranch house (the setting for their dinner tonight) and birthing their small fromagerie filled 25 years with tedium and pleasure.  The Monteillets make a range of goat’s- and sheep’s-milk cheese. You can taste the goods―and get close to the operation―at their new facility off U.S. 12 about a mile and a half west of Dayton (109 Ward Rd.; www.monteilletcheese.com or 509/382-1917); just look for the metalwork-goat mailbox. Mike Davis, for his part, has raised the bar on creative restaurant cooking in these parts with 26 Brix restaurant. While he was executive chef at the Salish Lodge & Spa, grandly situated on the western slope of the Cascades, news of riches in the east reached him. So he moved across, connected with local vintners and farmers, and now layers flavor on flavor, taking advantage of their heirloom beans and tomatoes. Dishes coming out of the 26 Brix kitchen are sophisticated, beautiful―and perfectly matched in quality to the product taking shape in area wineries. Chief chef in this group as well, Davis conceived the dinner they’re headed for. Holly and Michael Turner are supplying the wines, from both Three Rivers and Bodega Turner. Holly moved across the state in 2000 from colossal Chateau Ste. Michelle to join the very young Three Rivers Winery. Here she’s been able to put her French winemaking experience behind Three Rivers’ signature meritage (Bordeaux) blends and single-vineyard Syrahs, and on the side, with Michael, develop the Bodega Turner label. One of Walla Walla’s newest wineries, Bodega Turner concentrates on a white Bordeaux blend (“Deux Femmes”) as well as a Malbec (“Dos Amigos”) that reflects their joint experience in Argentina. On the warm spring evening in question, the Monteillets, Davis, and the Turners have widened their usual circle. Any guest list in these parts is sure to be populated with producers of wine, and dinner becomes a chance to taste each other’s wares. Walla Walla’s main agricultural product used to be collected in the grain silos idling around town; its new mainstay is preserved in bottles, and poured for all comers on almost every corner. More wheat gives way to wine every year. And Walla Walla has become the best wine-tasting town in the country. This has all happened in the last 25 years―actually, most of it in the last 5. In 1979, Gary Figgins established his now-legendary Leonetti Cellar (should you have the rare luck to happen on a bottle, take out a loan and consume the wine on the spot), and two years later, Rick Small followed suit with Woodward Canyon Winery (slightly easier to come by than Leonetti and almost as riveting). Until just a few years ago, though, there were fewer than 20 wineries in the valley. Now there are more than 60.  Tucked along the far southeast border of Washington, Walla Walla Valley has measurably great conditions for growing grapes: far enough north to have long days during the growing season, so the grapes develop complex flavors; east of the Cascade Mountain Range in the dry part of the state, so growers can control the water the vines get; and high enough in elevation that temperatures drop at night after scorching days, keeping acid levels high. Yet much of the larger Columbia Valley, stretching between here and the Cascades, has these conditions too, and produces exciting wines. What’s the magic of Walla Walla? Holly Turner takes a stab at the immeasurable: “I wish I could tell you what it is…. The microclimate here is different. These are small vineyards―no huge expanses. When you start blending grapes from them, you can capture the exact place and exact time in the wine.” The town, for its part, has captured a critical mass of talented winemakers. The resources of three colleges (including the new Walla Walla Community College Institute for Enology and Viticulture), a dynamic art and music scene, and some great restaurants make this a more interesting place to live than anywhere else between here and Seattle. So this is where many make wine, both from Walla Walla vineyards and from the greater Columbia Valley. The wineries tend to be scattered through the hills, with a few convenient clusters to visit. Many are focused on production, not tourists, though, so they’ve opened tasting rooms downtown, making their wines unbelievably accessible―within a few blocks, you’ll find more than a dozen tasting rooms. A good time to explore them is during Spring Release Weekend (May 7-8; free; 509/526-3117). Every year the wines released―Cabs, Merlots, Syrahs, Chardonnays, and other interesting whites―are more exciting than ever. When visiting the Walla Walla area, arm yourself with the free winery listing and map put out by the Walla Walla Valley Wine Alliance (www.wallawallawine.com or 509/526-3117).