Time to enjoy the biggest, juiciest fruit of all ― the very symbol of summer 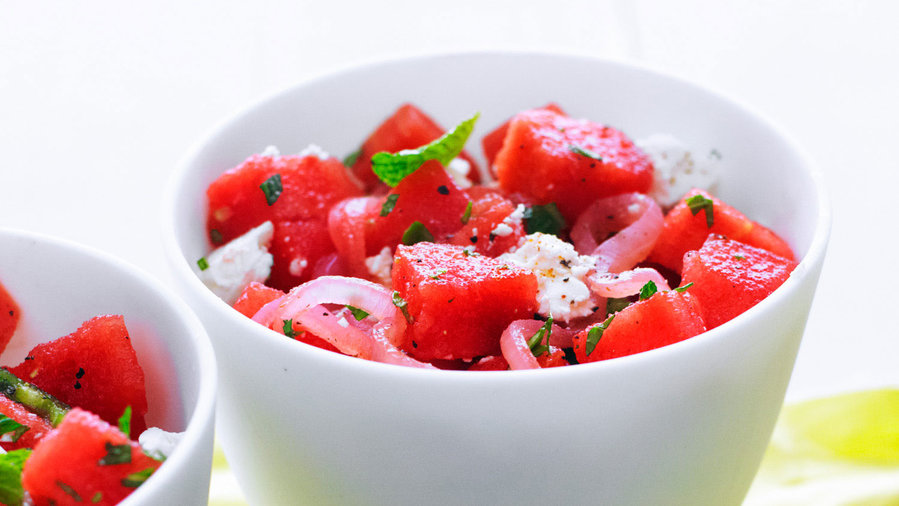 Iain Bagwell
Written by ANDREW BAKER, August 20, 2004
Share this story
It’s watermelon weather, that summer kinda weather, When people get together and sing. For it’s the sweetheart kissin’ season and all the world’s in rhyme When it’s watermelon sweet love tellin’ time. ― “Watermelon Weather,” by Paul Francis Webster Watermelon casts a magical spell on summertime. There’s something about a cold slice of the fruit that makes you, well, want to sing. Admittedly, it’s the water in watermelon ― or, more precisely, its juice ― that clinches the fruit’s status as the quintessential summer treat. A typical watermelon is 92 percent water. On a hot day, that’s a refreshing bite of trivia. An icy glass of watermelon agua fresca or bowl of watermelon-tequila sorbet cools like no other food can.

These days, watermelons are available year-round. In the West, farmers in California, Arizona, and Hawaii harvest the fruit from May through September. And from October through April, melons imported from Mexico, and sometimes Central America or the Caribbean, are available in markets.

But summer is the time when the most varieties and colors fill grocery store bins and farmers’ market stalls ― and at the lowest prices. Large melons ― round or oblong, from 16 to 45 pounds ― are known as “picnic” types. Markets often cut them up to sell in more manageable pieces. Smaller round “icebox” melons, from 5 to 15 pounds, are usually sold whole. Both categories include seedless varieties, as well as round yellow- and orange-fleshed types in the 10- to 30-pound range. Color-blind taste test Yellow- and orange-fleshed watermelons are visually startling, to say the least. But are their flavors singular as well? We blindfolded 11 Sunset staff members, had them taste red, yellow, and orange seedless watermelons side by side, and asked them to identify which was which. The results ― if not the flavors ― were surprising: Only one person correctly identified each melon’s color. (Later, he admitted it had been pure luck.) Our conclusion? Take full advantage of yellow and orange watermelons for their flashy colors, and interchange them freely with red fruit for that classic watermelon taste. Lyrics printed with permission