(And don’t forget the Brandy Shakes.) Delicious recipes from the West’s greenest restaurant 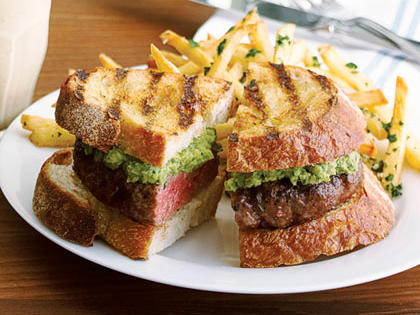 When Hugo Matheson says he’s in one of his “moods,” that means he’d rather be out on a farm than inside the Kitchen, the popular Boulder, Colorado, restaurant that he opened as chef and co-owner in 2004.

It makes sense, given that nearly everything this man does connects to the Earth: With his business partner, Kimbal Musk, he’s created a restaurant that recycles or composts nearly all of its waste, down to the cooking oil (a neighbor uses it for biodiesel) and the take-out containers (biodegradable). Its electricity comes from wind farms. And the names of its food suppliers, mostly local, are proudly displayed on wall chalkboards.

It’s this last part of the green ethic that appeals to Matheson most: “There’s more excitement to me in having relationships [with farmers] ― because it’s real, not just a trend.” Every chance he gets, he stumps through the fields of local farms, rhapsodizing about the crops, chatting with farmers, learning something new ― including, last year, how to raise pigs. “We found a family farm that sold us a couple of little porkers,” he says. “Some people think we were a little mad to do it, but what fun it was!”

Matheson comes by his eco-values naturally. He grew up in the English countryside, not far from Cambridge, and absorbed thriftiness practically to the bone from his mother and grandmother, who had lived through World War II and rationing. His mother hasn’t changed. “The kitchen is a continuously working part of her house,” Matheson says. “There’s always stock boiling on the stove or someone picking fruit from the garden.”

His native thrift means anything but severity or skimping when it comes to style and flavor at the Kitchen. Housed in a century-old brick building, it exudes a comfortable, open-door vibe. Furniture and fixtures are largely recycled, but they’re great to look at: The handsome communal table and bar were built from salvaged roof rafters, and the funky bar lights from lab beakers. The chandeliers use crystals scavenged from eBay. The food is absolutely delicious. For breakfast, you’ll get creamy coffee from a nearby fair-trade roaster and super-fresh farm eggs, maybe with braised organic greens picked that morning. Lunch and dinner feature big, bold flavors that hit the sweet spot between simple and sybaritic: poached salmon on buttery squash risotto; expertly charred flatbread; and a juicy Colorado lamb burger with garlicky fries and a brandy vanilla shake ― fast food done slow, to be savored.

Matheson hasn’t a trace of smugness about him, and he grumbles a bit about the media fuss over the restaurant’s green practices. For him, they have nothing to do with being hip or seeking glory. “I don’t think going about it with the mentality of ‘saving the world’ is the right way of doing it,” he says. “Those are things that have just sort of fallen into place, and we forget about it, really; it just happens now. Which is a nice way to do things.”

Lamb Burgers
The Kitchen gets grass-fed lamb from Fox Fire Farms (970/563-4675) in southwest Colorado. These juicy burgers are a nice alternative to hamburgers.

Pea and Mint Relish
This relish looks like guacamole, so the mild, fresh flavor of peas and mint is a surprise.

Garlic Fries
Matheson always deep-fries his fries at the Kitchen. They’re exceptionally delicious but do require soaking and double-frying. Our shortcut version of the Kitchen’s recipe requires no soaking and only a modest amount of oil (for the deep-fried original, see below). The fries can bake while you’re outside grilling the burgers.

Garlic French Fries
The Deep-Fried Original. Twice-cooking these fries yields the tastiest results: The first round cooks the potatoes and removes some of the water and starch, while the second makes them nice and crisp.

Brandy Shakes
“We have a group of friends from Texas who have a liking for brandy freezes,” Matheson says. “I had never had these before, but now, when they’re in town, I’m back in the kitchen mixing up gallons of them. This makes enough for 6, or 1 Texan.” Feel free to experiment with other flavors of ice cream and less brandy if you like.

DOWN TO THE LAST DETAIL

A lot of small actions can make a big difference. Going beyond most “eco-friendly” restaurants, the Kitchen:

1. Furnishes its space with largely recycled or salvaged fixtures and materials.

3. Offers cloth towels in the bathroom.

4. Depends mainly on local food suppliers (whose names are displayed on chalkboard in the dining room).

5. Prepares staff meals at the end of their shift to use up extra food and wine.

6. Asks staff to use reusable mugs.

8. Gives its cooking oil to a neighbor for biodiesel.

9. Recycles or composts nearly 100 percent of its waste.