Learn how to make the cutest little spooks. 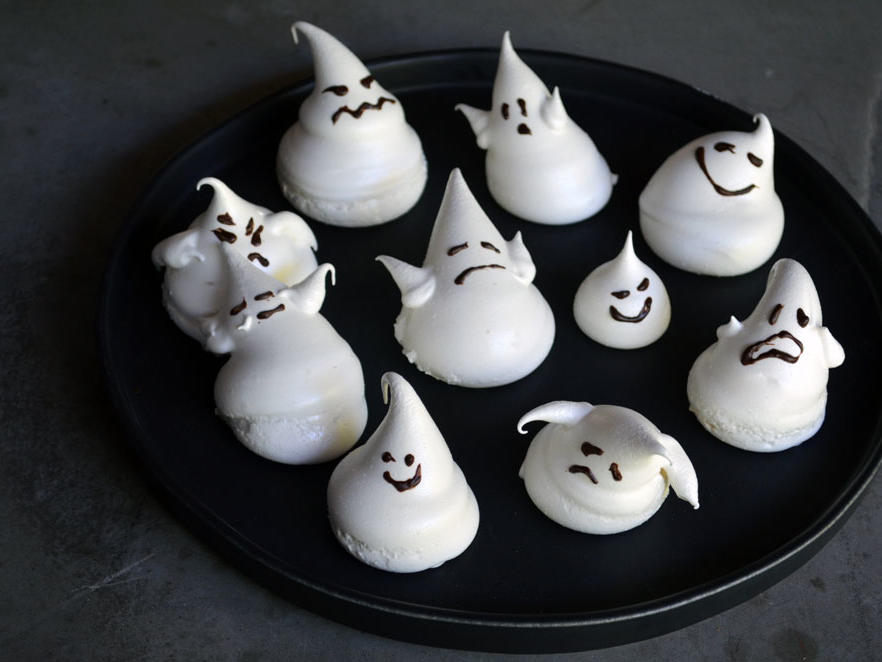 I’ve always admired people who go all out for Halloween. The elaborate hand-sewn costumes. The house, draped with fake cobwebs. The yard, festooned with pumpkins and witches. So this year, I decided to bake up a batch of crunchy meringue ghosts, with faces piped on in melted chocolate.

First, I separated a few eggs. Only the whites are used for meringues.

After beating the whites with cream of tartar and a bit of vanilla, I added a slow rain of sugar, beating and beating until the whole thing turned thick, glossy, and bright white. Then I spooned the meringue (sticky sticky) into a pastry bag with a narrow tip.

You can also use a sealable plastic freezer bag with one corner snipped off.

Then, I piped out the meringue into mounds. At first, I made my mounds much too tall and they slumped over. (Two inches is about right.) It also took me a while to get the hang of pulling the piping bag straight up, instead of at an angle.

So I had a panful of weird-looking ghosts, with sagging, slumping bodies; some were even stuck together. I thought about throwing them away—until I texted someone in the middle of my baking disaster, using sad emoji to express what was going on. Suddenly I knew what to do: Turn my pathetic meringues into emoji.

Then it all became fun. And I got better at piping.

These expressive little ghosts are made of French meringue—egg whites beaten with sugar until stiff and then baked. It’s similar to but not the same as marshmallow (made with egg whites, hot sugar syrup, and gelatin) and harder to shape. Extra-fine sugar creates a slightly smoother meringue.

1. Preheat oven to 200° with racks in upper and lower third. Line 2 baking sheets with parchment paper, or butter the baking sheets and dust with flour.

2. In a deep bowl, with a mixer on high speed, whip egg whites and cream of tartar until thick and foamy. While beating, slowly add sugar, a few tablespoons at a time every 30 seconds or so, then whip until meringue holds very stiff peaks.

3. Beat in vanilla. If using parchment, smear a little meringue on the underside of each corner to make it stick to baking sheets.

4. Spoon meringue into a pastry bag fitted with a 1/2-inch plain tip (or spoon into a gallon-size heavy plastic food bag, then cut off 1 corner to make a 1/2-inch-wide opening). Hold bag perpendicular to baking sheet and pipe, with even pressure, to form 2-in.-tall mounds of meringue. (If you make them taller, they’ll fall over.) If you want to give the ghosts arms, put some meringue in a smaller bag, snip a smaller opening (or use a smaller tip), and pipe arms onto ghosts.

5. Bake meringues until they’re firm to the touch and no longer sticky but not yet beginning to brown, 1 to 1 1/2 hours; switch pan positions halfway through baking. Turn off heat and leave meringues in closed oven for several hours or overnight.

6. Put chocolate in a 2-cup glass measure and heat in a microwave until melted, 80 seconds, stopping and stirring every 20 seconds.

7. Spoon chocolate into a small piping bag with a tiny tip (or a resealable plastic bag with a tiny corner cut off). With steady but slow pressure, squeeze chocolate onto ghosts to create a variety of expressions.