Dungeness crab update: The latest on the supply situation

The state of dungeness crab 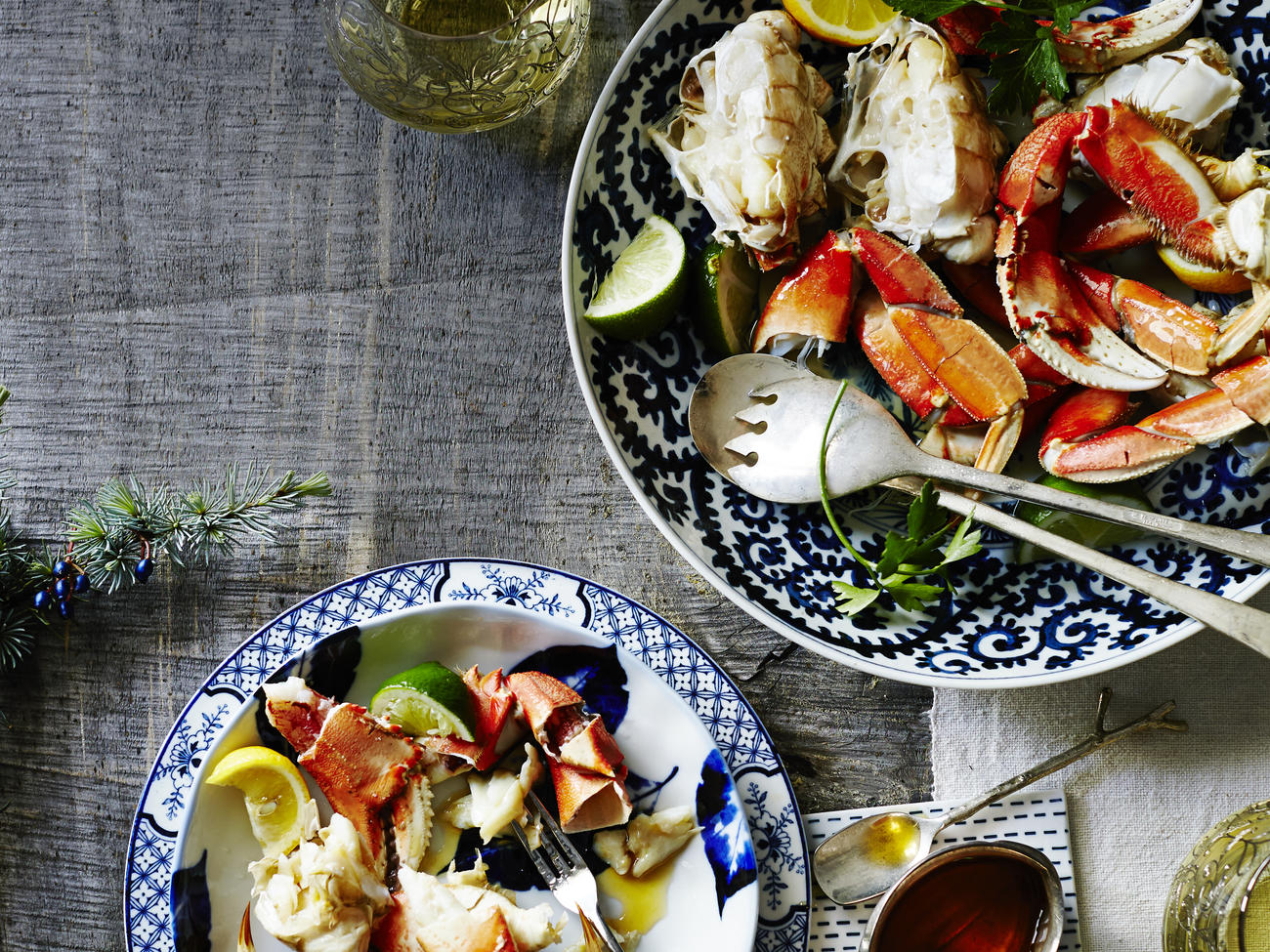 Cracked crab from our December cover story, about to arrive in homes across the West. (Photograph by Iain Bagwell)
Written by Margo True September 26, 2017
Share this story 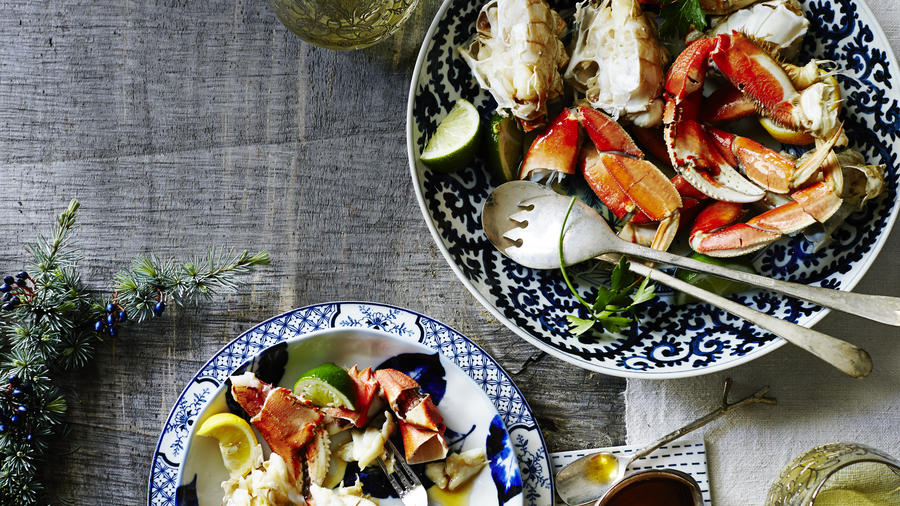 Cracked crab from our December cover story, about to arrive in homes across the West. (Photograph by Iain Bagwell)

Now that it’s official, and California’s commercial Dungeness crab fishery is indefinitely delayed due to toxic levels of domoic acid along the coast, along with delays in Oregon and part of Washington, what’s a crab lover to do?

We are asking ourselves that question on a daily basis here at Sunset, in no small part because our December issue features a cover story about cooking Dungeness crab. What prime rib is to the East Coast, Dungeness is to the West. Now we’ll be thousands of crabs short of a full holiday haul.

Where will our crab come from, over the next few months? How expensive will it be? And if the answers are “Uncertain” and “Ridiculous,” what else could feasibly take the place of a cracked-crab feast?

To get a more detailed picture of our Pacific Coast crab supply and how the season might unfold, I talked to spokespeople for departments of fish and wildlife, departments of agriculture, and seafood marketing representatives from California to Alaska, as well as the Monterey Bay Aquarium. A massive bloom of a microscopic algae called pseudo-nitzschia currently stretches this entire distance, in the open ocean off the coasts, and is producing, in varying amounts, domoic acid – a potent neurotoxin that is now pervading the meat of Dungeness crabs. The crabs aren’t harmed, but eating them can cause seizures and short-term memory loss, and in some cases death. 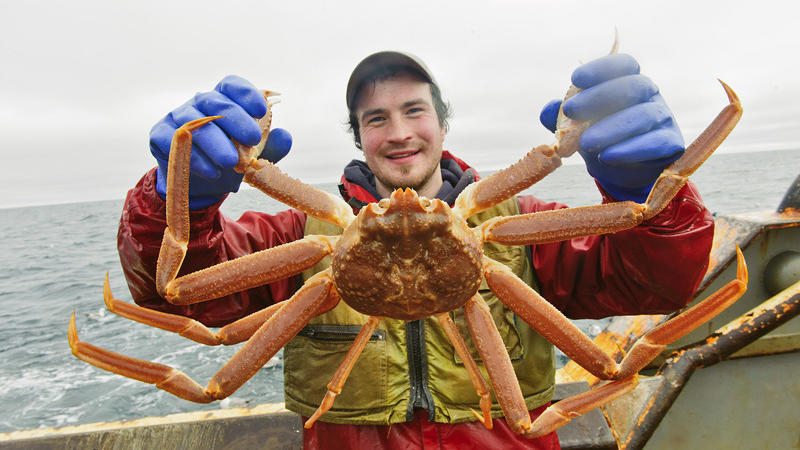 Could this crab replace Dungeness, at least for now? It’s a Tanner crab (aka Bairdi crab), a type of snow crab, from Alaska. (Photograph courtesy Alaska Seafood Ma…

California is where the situation is most severe—fisheries are closed from the Oregon border down to the southern Santa Barbara county line. Authorities refuse to predict when the crabs might be safe to eat again or when the fisheries might open. The California Department of Public Health, which works closely with the California Department of Fish and Wildlife, is posting weekly updates on the status of the crab season. Typically the viscera—the guts—of crab show the highest levels of contamination, and the meat is relatively unaffected, but at the moment even the meat of crabs far exceeds the allowable 200 parts per million of domoic acid—so it is anyone’s guess as to when they will be available again. On November 19, hopeful reports from tests around San Francisco, Half Moon Bay, and Morro Bay showed that domoic acid levels were dropping, but the tests must be repeated—and even if the all-clear is given for that area, the Department of Fish and Wildlife may decide to keep it closed due to the deluge of demand. “It’s conceivable that we may not have local crab until January,” says Paul Johnson, longtime owner of Monterey Fish Market in Berkeley, and author of the book Fish Forever. Supply: None right now, and the outlook is not promising.

Oregon too has decided to delay the commercial crab season, which was due to open on December 1. The whole southern coastline is affected, even the inland bays–which typically aren’t as impacted by domoic acid. The waters north of Heceta Head (roughly in the center of the coast) remain clean, says Judy Dowell of the Oregon Department of Agriculture, which works with the Oregon Department of Fish and Wildlife. However, the overall situation warrants the closure. Supply: None right now.

In Washington, where the fall coastal crab season usually also opens on or around Dec. 1, state officials have also just delayed the start of the season along parts of the coast. (The state’s coastal crab fishery was shut down in June, during the summer season, due to high domoic acid levels. It finally dissipated in September–at least three months later.)

The good news is, inland (bay) crab season has been open in Washington since July, and is supplying problem-free crab right now. And on November 19, crab season opened for Washington’s tribal fisheries, which can bring in up to 50 percent of the harvest on the north coast. Their crab fisheries have tested clean. Supply: Bay crabs, good; Tribal fisheries, also good; other coastal fisheries, delayed.

Dungeness crabs in British Columbia have been declared safe, and B.C. crabs are going into American seafood markets. Monitoring continues, however. Supply: good.

No problems have been detected in Alaska, says Tyson Fick of the Alaska Seafood Marketing Institute. However, the season ends soon, on November 30—and most of what it supplies to the Lower 48 is shipped out frozen, as “clusters” (ie large sections of legs, claws, and body). Fick says that Tanner snow crabs, also known as Bairdi crabs, are booming this year—they’re tasty, about the same size as Dungeness (although with a smaller body and longer legs), and could make a fine substitute; try ordering them through your local fish shop. They still won’t be available live, though, and as most Western crab fans know, boiling crab live gives you the sweetest, most tender meat. Supply: Good, but no live or whole crabs.

So, what about the prices?

It’s a little early to tell, but I asked our go-to local fish market, Cook’s Seafood in Menlo Park, CA (which has live Dungeness in its tanks right now). Tom Crumrine, whose grandfather and father own Cook’s, told me that their crabs were coming from the bays of Washington State, and he had full faith that Cooks’ well-connected supplier would continue to source enough live crab for the shop. The price today: $13.99/lb. versus $10.99/lb. a year ago.

Paul Johnson, the owner of Monterey Fish Market in Berkeley, had a somewhat bleaker outlook. He’s sourcing live crab from British Columbia, but supplies are uneven, partly due to massive storms up north that are keeping the crab boats from going out. “There’s going to be so much demand for Dungeness that they’re going to be really pricey,” he says. Johnson predicts as much as $14 or $15 per pound, meaning a decent-size crab of 2 ½ pounds could cost $35. To give his customers an alternative, he’s offering lobsters for $15 each. And he’ll have frozen crab from Canada as well.

Nearly everyone I talked to expected the price of crab to rise. And there’s the real possibility that crab will be scarce, even at that price.