Bees pretty much scare the bee-jebus out of me. And I can deal with that, but I don't want to pass this phobia on to my daughter. One of ... 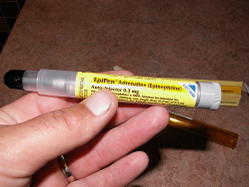 Bees pretty much scare the bee-jebus out of me. And I can deal with that, but I don’t want to pass this phobia on to my daughter.

One of my earliest memories is of my mom being stung while gardening. From preschool picnic tables on, I was wary. But I didn’t start stuffing an EpiPen in my purse till I was in my mid-20s, after a bee turned a family rafting trip into a trip to the ER in our swimsuits: On our way back to the river after a picnic lunch, a yellow-jacketed insect of some stinging variety landed on my brother’s hand. He yelped and cursed, then started turning blue and breathing erratically—he was in anaphylactic shock.

As we panicked and plunged his arm into the cold river to try to slow the venom’s spread, a clear-headed rafting guide grabbed a first aid kit with a syringe of epinephrine. The shot of adrenaline slowed the anaphylaxis, an ambulance soon whisked him away, and an ER doc administered an IV of epinephrine to stop his body’s severe allergic reaction (to heal him completely, the therapy had to continue for days).

I haven’t been stung, and I don’t know if I’d have the same reaction, but I keep my EpiPen nearby to be safe. And I try not to spaz out and shriek when I hear buzzing, but I recently realized that I do flinch and flail just a bit: A few weeks ago, a fly hitched a ride in our car, and my 2-year-old daughter nearly started crying as she contorted her arms under the seatbelt and attempted to stuff them safely under her shirt. “A bee, a bee!” she yelled out. “Mommy, help!”

I opened the window wide and encouraged her to flick the insect away: “Shoo, fly, don’t bother me!” we sang, wiggling our arms. She quickly recovered, but I realized that I had some work to do if she was going to respect bees and their place in nature.

At a book-sale fundraiser for my daughter’s preschool, I spotted The Beeman, Laurie Krebs’s rhyming tale of a grandpa beekeeper and his adoring grandson. It’s packed with bee details (Krebs’s husband is a beekeeper) and sweetly illustrated by Valeria Cis.

My daughter is head over heels for her grandparents, so I thought she might get hooked on the concept of a grandpa story. I usually have a price threshold for kids’ books, but I figured that $17 now might save me hundreds in therapy bills later. So the other evening, after carving pumpkins (Happy Halloween, everyone!), we sat down for a snuggly read.

I pointed to the cover: Do you know what that is? “Yeah, it’s a bug.” What kind of bug? “One that flies.” Yes, and one that helps trees produce sweet fruit. And they make yummy honey, I said, showing her a tiny jar of golden goodness from Sunset’s own hives (thanks, Team Bee!).

Eyes wide, she opened the cover and I started reading. We buzzed quickly through each page, pausing to act out the bees’ wiggly wings and admire the grandma’s apple-honey muffins (the book includes a recipe).

When we got to the part about extracting honey from frames, I handed her the jar of Sunset honey. “Bees made this?” she asked, incredulous. Yes, I said. “This bee made the honey?” she asked again, pointing to the bee on the label.

Yes, lots of bees made it, including that one (an especially photogenic worker from a Sunset hive). Would you like to taste it? Vigorous head nodding, then an excited little “Yeah.”

I put some on a spoon and she opened wide.