Capturing a swarm of bees

We've been working on the May issue of the magazine, so I didn't have time to blog about the rest of the high drama in the beeyard that b... 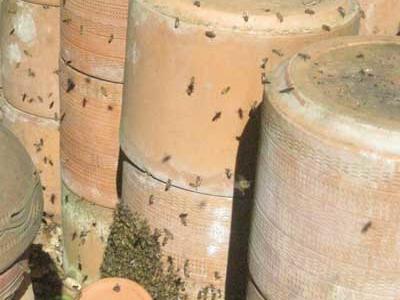 We’ve been working on the May issue of the magazine, so I didn’t have time to blog about the rest of the high drama in the beeyard that began when Betty swarmed last week. She first swarmed on a Tuesday, then on Wednesday, another swarm left the hive, puddled on the ground, and then crawled back, ending up underneath the hive. By that evening I only saw a few bees sniffing around the stack of clay pots near the hives. It looked sad, like they’d lost all their girlfriends and were trying to figure out what to do. I thought we’d lost another bit of Betty.

But the next morning we found a small swarm on one of the clay pot stacks! 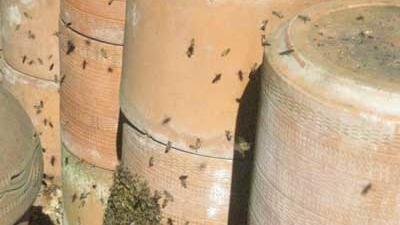 Bee Team member Brianne, who belongs to the Santa Clara Valley Beekeepers Guild, had just attended a lecture about how to capture a swarm. She calmly and surely scooped the bees into the box we’d prepared as a trap box (we cut a hole into the side and put some wax inside—it’s supposed to be enticing to bees on the prowl for a new hive). 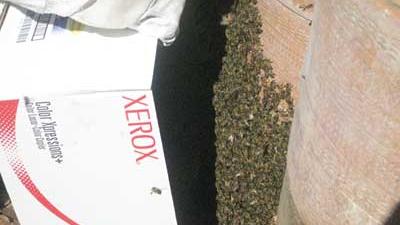 The bees tumbled right in, with a little help from a bee brush. They were so docile. Like little kittens (with stingers). They were huddled and sweet, and seemed a little dazed. They never once tried to sting us, although if we had somehow hurt the queen or threatened them, they would have. But slow, steady, and careful handling keeps bees calm.

We figured we’d gotten the queen that was in the middle of the swarm, because after we put the lid on the box, bees ringed the hole in the box, bottoms out, and fanned for all they were worth, spreading pheremones that told the other bees “hey, Her Majesty’s in here!” The bees we hadn’t caught poured up to the box and into the hole, just like they are supposed to do. 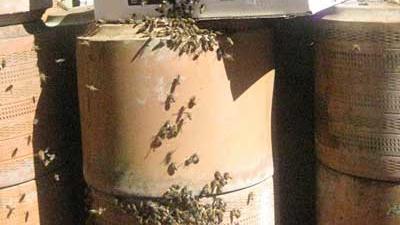 The box of bees went to Tom Vercoutere, of the Beekeepers Guild Of San Mateo County. He’s been so generous with his help as we stumble through our first year of beekeeping, we thought we’d give him the swarm as thanks.

This week has been calm in the beeyard, although Betty (or what’s left of her hive) sometimes clumps up at the entrance of her box. We’re not sure what’s going on in that hive. We hope that the bees planned well and prepared some queen cells so they’d have a new queen after they swarmed. There have been plenty of drones, so she shouldn’t have any trouble getting mated. Hopefully she’ll start laying eggs soon.