But I’m a beekeeper. How can I possibly be allergic to bees?

About a month ago Margaret and I were out at the hives having a go with the bees, when one crawled up my suit leg and stung me on the thig... 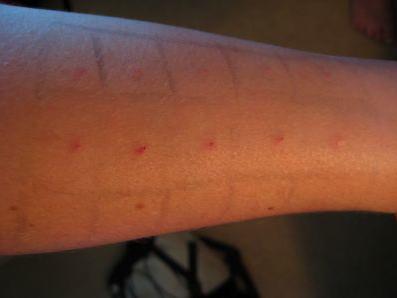 About a month ago Margaret and I were out at the hives having a go with the bees, when one crawled up my suit leg and stung me on the thigh.  Perhaps I was being an irresponsible beekeeper wearing a suit ten times too large, defeating the purpose of elastic around the ankles, but in nine months I had never been stung at work while wearing this absurd ensemble.  “No big deal,” I thought.  I have been stung a time or two (or ten).  I couldn’t get into my suit to get the stinger out immediately, so I finished what I was doing, then managed to retreat from the hives for stinger removal.  Five minutes later I got stung again on my ankle.  Still, no big deal.  ” I’m just building up my immunity,” I rationalized in my head and I quickly brushed out the second stinger.                                                                                                                 About a half hour later when Margaret and I were inside cleaning up, I began feeling really hot, then cramps took over my body, then vomiting ensued.  No swelling or trouble breathing, but these cramps were killing me (similar to what I would imagine child labor to be like).  No joke.  I have a very high pain threshold, but this was the worst I have ever experienced.  To the ER we went, where I received an IV and morphine, but no concrete answers as to what the problem might be.  I hadn’t experienced any abnormal swelling from the bee stings, so those had been written off as the problem, but the cramps would not lighten up.  One nurse suggested it might have been a kidney stone, a worthy suggestion.  I’d like to give a shout out to the doctor who INSISTED the torrential pains were menstrual cramps…  You were wrong.  A few hours later the pain subsided and I was released from the ER a bit shaken up, but feeling fine.  During the next few weeks I embarked on a mission to get to the root of this bizarre episode.  A few doctors visits and many tests later, the diagnosis was a honeybee allergy – not kidney stones and definitely not menstrual cramps.  Baffled by the whole ordeal, I naturally had a few questions for allergist, Dr. Toby Levenson of  Allergy and Asthma Associates of Northern California.

BMc:  I wasn’t allergic to bees before, but I am allergic now.  How did that happen?Dr. L:   People can develop allergies at any point in their lives.  While some individuals build up immunities from multiple exposures to an allergen, others will develop sensitivities.  Frequent exposure can cause your body to build up IgE antibodies against the allergens, which will then produce common allergy symptoms and sometimes very severe symptoms.BMc:  I didn’t swell up or have trouble breathing.  Can bee allergies produce different symptoms?

BMc:  How can people be tested for honeybee allergies?Dr. L:  In the past, doctors would crush a whole bee on your skin and wait for a reaction, but that wasn’t very effective.  Venom allergies can now be detected through blood work and by performing skin tests.BMc:  If in fact someone is allergic, can anything be done to alleviate the allergy?Dr. L:  Desensitization is highly effective.  Studies have shown that after desensitization you will be at the same risk as someone without the allergy. Typically this requires getting a shot once a week for 2-5 years… usually on the higher end of the scale for venoms.  Rush immunotherapy has been tried, but far too often patients have had severe reactions to the higher potency shots.  To avoid being stung, do not wear perfumes, avoid grassy areas, refrain from wearing bright floral colors and don’t harass hives of any sort.

Now you may be wondering…

Q:  Are my beekeeping days over?  A:  At  Sunset, yes.  They are sadly at an end.  I would not want to be a liability to this wonderful company, but I will still be helping with Team Bee projects and harvesting frames of honey.  Although, I may try to join up with Team Chicken and Team Cheese.   I will also still be Captain of  Team Mead At home, beekeeping will carry on.  From this point forward I will be taking extra special precautions not to get stung, beekeeping only with a buddy, and keeping my new EpiPen, Benadryl, and Predisone close by.  I am currently in the desensitization process, so hopefully in a couple years the allergy will be no longer.

A:  Probably, but I just can’t imagine walking away so easily from this hobby I’ve come to love. 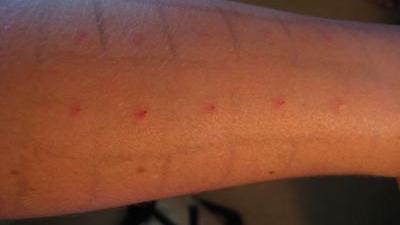 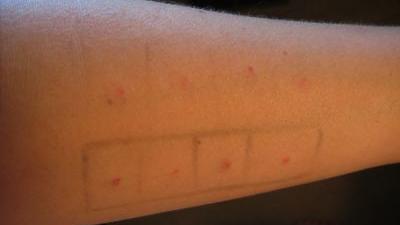