Brad Lettau, executive chef at the Hitching Post II in Buellton, CA, started making bacon several years ago, to give to special customers... 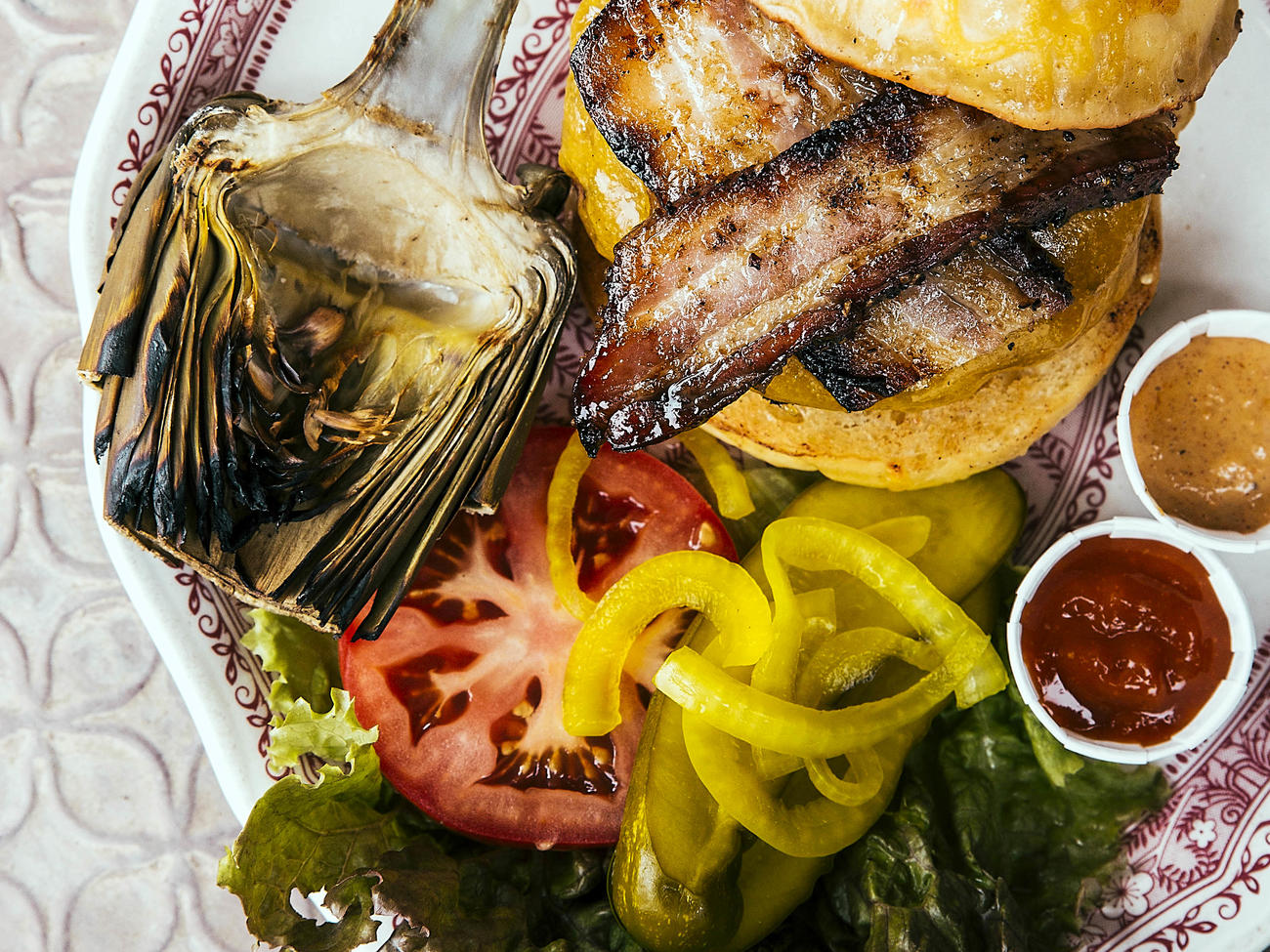 Brad Lettau's red oak–smoked bacon on a cheeseburger, the way he makes it at The Hitching Post II. This and all other photos below by Thomas J. Story.
Written by Margo True September 26, 2017
Share this story 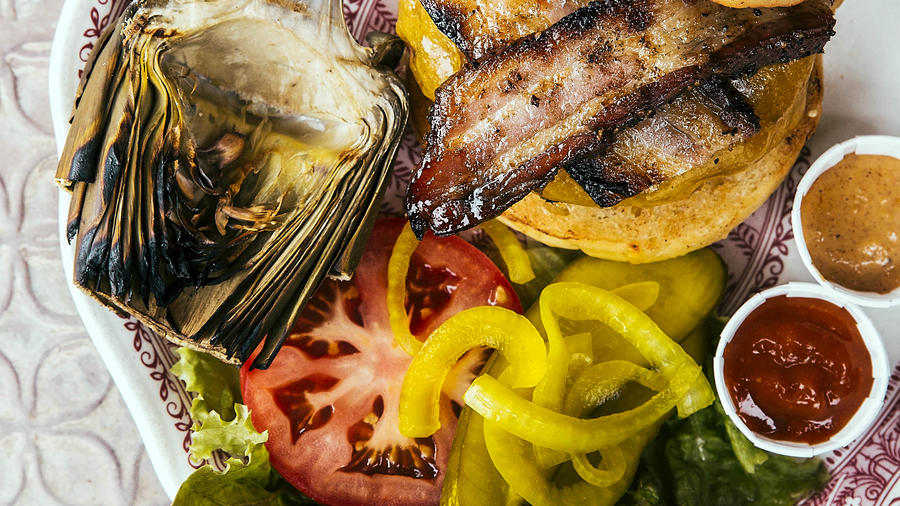 Brad Lettau’s red oak–smoked bacon on a cheeseburger, the way he makes it at The Hitching Post II. This and all other photos below by Thomas J. Story.

Brad Lettau, executive chef at the Hitching Post II in Buellton, CA, started making bacon several years ago, to give to special customers. Now his monster slices (cut half an inch thick from smoked slabs, then grilled until crisp-edged) are something of a cult item.

You can make decent bacon in two steps—cure, then cook—but Lettau takes the extra step toward porkaliciousness and smokes it after curing. At the Hitching Post, he uses an industrial smoker, but at home he smokes the bacon on a gas grill.

To make Brad’s bacon on your backyard grill, you’ll need kindling, available wherever barbecue supplies are sold. You’ll also need wood chunks, 2 to 3 inches thick. “They give off a little more smoke than chips do and last longer,” he says. He uses fragrant California red oak chunks (find at fruitawoodchunks.com), but widely available hickory, apple, and cherry make good-tasting bacon too. He doesn’t use curing salt, a common preservative that also gives bacon its familiar, “bacony” taste and rosy hue. But if you’d like to, see “What About Nitrite?” at the bottom of this post for the details you’ll need.

Want to make this bacon on a charcoal grill instead? Go to sunset.com and search for “Brad’s Homemade Bacon.”

1. Mix salt (and curing salt, if using; see “What About Nitrite?” below) and sugars together in a bowl with your hands. “That way you can break up the lumps in the brown sugar.” Rinse pork belly, pat dry, and cut in half crosswise (with the grain).

2. Rub pork halves all over with molasses. “Get it into all the nooks and crannies.” 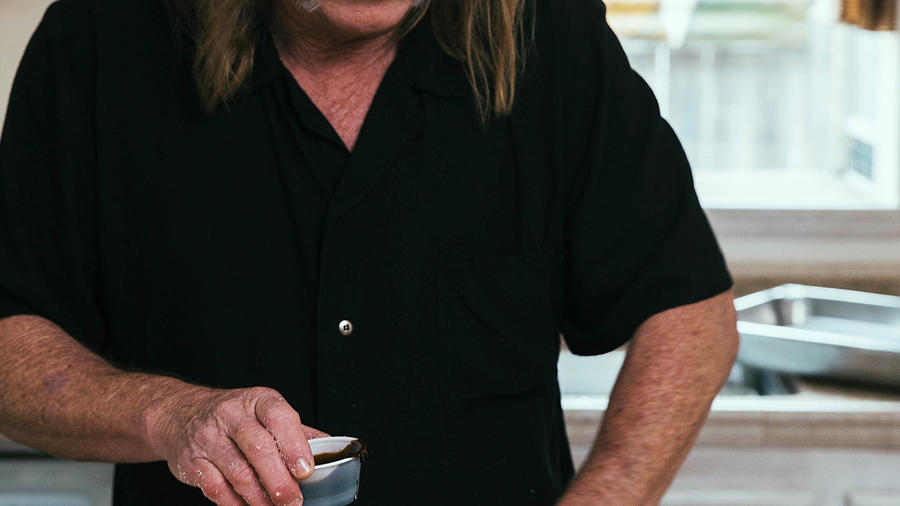 Lettau starts the cure by rubbing the pork belly with molasses.

3. “Then, when it’s nice and lathered up, I sprinkle it on both sides with pepper.” 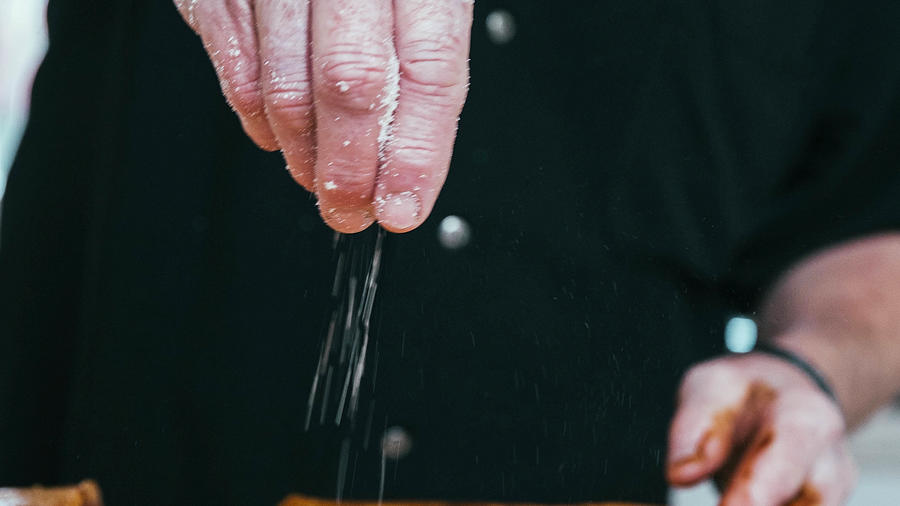 4. Follow the pepper with a generous coating of salt-sugar mixture; depending on the size of your halves, you may have quite a bit left over. “Massage it in gently all over and then give them a little shake” to get rid of the excess. 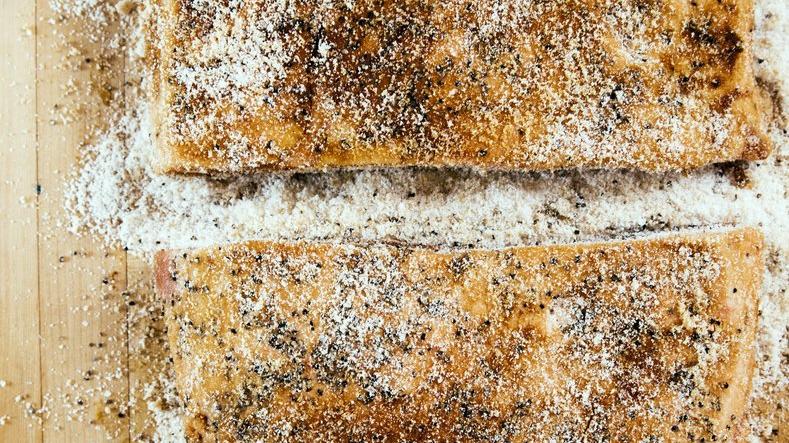 The bacon now has its dry rub of salt and sugars laid on top of the molasses and pepper.

5. Put each half in a nonmetallic container with 2-in.-high sides, such as a Pyrex baking dish. Cover with plastic wrap.

6. Chill pork halves 5 days to 1 week, depending on their weight. Turn them over every day. They will produce quite a bit of liquid, which you should leave. “You have to turn them religiously. That gets them to cure evenly.” They will feel firmer than they did when raw and will be a deep rosy brown color (rosier if using curing salt). 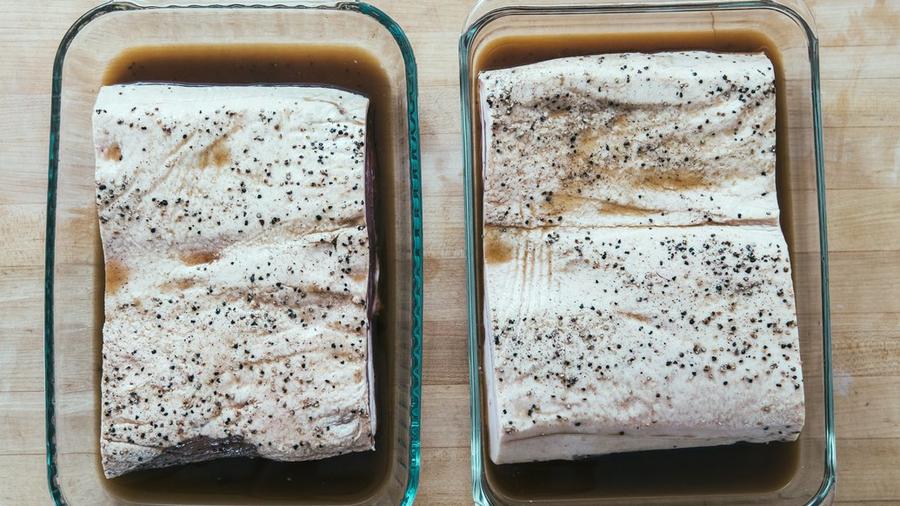 7. Rinse pork (it’s okay if some pepper still sticks) and pat dry. “Otherwise your bacon might be too salty.” Set aside at room temperature.

8. Arrange 8-10 red oak chunks with several sticks of kindling in a chimney starter, pack underneath with newspaper, and ignite the paper. Let burn until flames subside and wood is smoldering, 10 to 15 minutes.

9. Meanwhile, remove cooking grate over one burner on a gas grill. Turn burner to its lowest setting. With a small, sharp knife, poke several dime-size holes in a large sheet of foil.

10. Set an 8- by 10-in. disposable aluminum roasting pan directly on the lit burner and carefully transfer smoldering chunks to pan. Using grilling gloves or tongs, cover with the perforated foil. 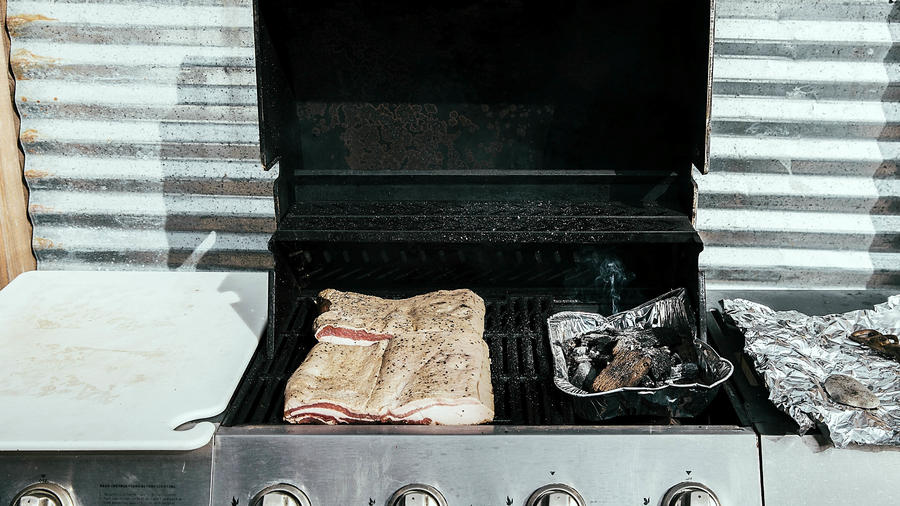 Lettau’s gas-grill setup: Bacon on the left (over a turned-off burner) and the pan of smoking red-oak chunks on the right (starts out on a lit burner). The perforated foil for covering the wood is to the far right–as well as a thin stone to prop…

11. Lay pork halves, fat side up, on cooking grate over a turned-off burner, at least 2 in. apart. Set grill lid slightly ajar with a small stone about 1 in. thick. Your goal is to produce lots of billowing smoke. 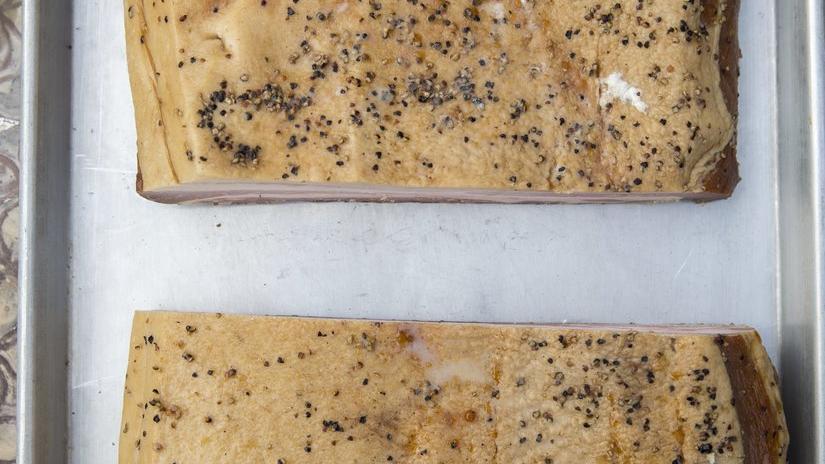 13. Chill smoked bacon, uncovered, 4 hours, then wrap well in plastic wrap and chill overnight. “You want it to be not so pliable when you cut it.”

14. If the bacon’s sides are uneven, “whack them off and use them in soup or beans. At the restaurant, we dice them up and make bacon jam too. I put that on everything!” Set a metal rack in a rimmed baking pan; repeat with a second pan and rack. Slice bacon with the grain about 1/2 in. thick, then lay slices on racks.

15. Put pans in oven and turn to 425° (do not preheat oven). Roast bacon just until edges are crisp, about 30 minutes, rotating pans halfway through if necessary for even browning. “I like to render it first so some of the fat drips out, but not so much that you get shrinkage.” Bacon can be cooled at this point, then wrapped in plastic wrap and chilled for up to 2 days. 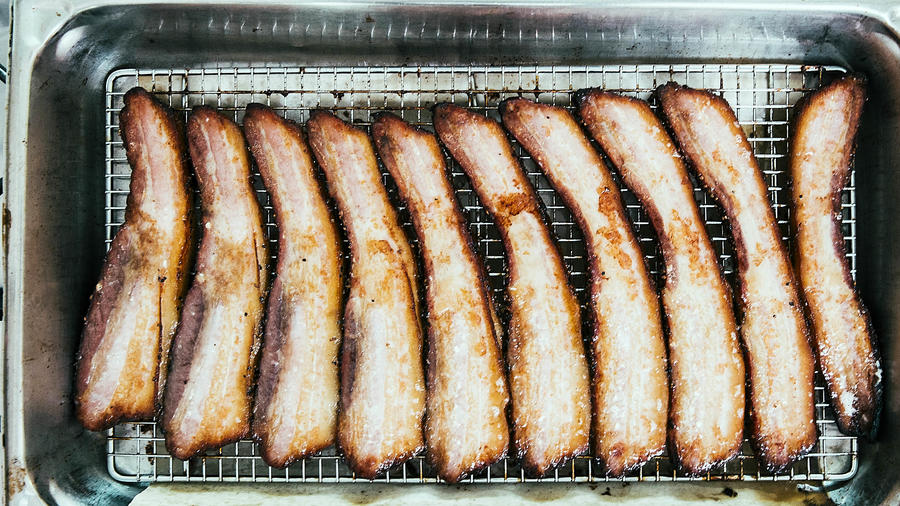 16. To finish cooking, either grill it (as Lettau does at the restaurant), pan-fry it, or keep roasting until it’s as crisp as you like. Lettau suggests not overcooking. “I like the edges to be crisp but the rest juicy.”

*Diamond Crystal is much more voluminous than Morton’s, so you need to use more of it for equivalent saltiness.

Brad Lettau cures his bacon without sodium nitrite, a salt used commercially to ward off bacteria. (Sodium nitrate, also sometimes used, converts to nitrite inthe body.) Bacon made without nitrite tastes porkier and is browner; nitrite is what adds that familiar “bacon-y” taste and rosy hue.

Lettau’s bacon is absolutely safe to make at home because it’s roasted well. But if you’re considering using sodium nitrite, here’s what to know. In the 1970s, studies suggested it could be carcinogenic; however, the National Academy of Sciences and the American Medical Association have since concluded that, in the small amounts typically added to food, it isn’t harmful. In fact, we get nitrite from vegetables (especially celery and spinach).

If you opt to add sodium nitrite to Lettau’s recipe, all that’s required is 1 teaspoon of pink curing salt (a mix of 6.25 percent sodium nitrite and 93.75 percent salt) for every 5 pounds of meat, mixed in with the dry rub in step 1. The bright pink color means you won’t mistake it for table salt.