B-DAY: First sips of the beer we grew from seed

On Friday, we finally tasted the results of a year and a half of beer-making effort. Our brand-new Belgian Abbey Ale. Yes, it's true: ba... 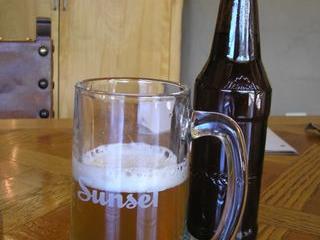 On Friday, we finally tasted the results of a year and a half of beer-making effort. 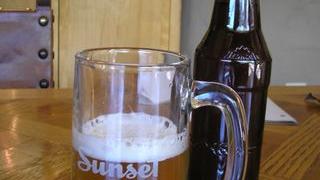 Our brand-new Belgian Abbey Ale.Yes, it’s true: back in the winter of 07-08, we planted our barley, wheat, and hops. In summer, we harvested (more like fought off the squirrels for the last stalks of grain) and embarked on the extremely annoying task of threshing (perhaps because we chose to hand-pick the papery, spiky little bracts off each grain instead of choosing a more brutal approach, like running over bags of grain with a car or maybe whacking a burlap-sackfull the way you would a piñata) to malting, brewing, and bottling.

Now came the moment of truth. Team Beer and other assorted staffers gathered around, and we popped open a few bottles.

Rick, Team Beer’s Beerless Leader (looking at the beer): Boy, is that blond. (Sips beer and sort of chews it.) Grainy.

Rick: We put 3 ounces of hops in there [typically this size batch has 2 oz.] but it’s very balanced.

Rick: It has a bitter edge to it, though.

Sara: I think it has a zingy, citrusy edge. And definitely wheaty. I like it.

Alan, managing editor (thoughtfully): No. I wish it were sweeter—then I’d like it more. That final flavor, whatever it is—it’s kind of like a plastic jug.

Margo: I think it may be the hops.

Rick: This seems lighter than your typical banana-clove wheat beer. That can get so tiring.

Margo: I do get some banana in this, though. Remember when it was fermenting? How it went into a kind of frenzy? It blew the airlock off the carboy.

Rick: That was one strong yeast.

Michael Andrews, VP of finance and business development: (Shrugs.) I wouldn’t buy this beer, but I’d probably drink it.

Elaine Johnson, associate food editor: It’s refreshing, and I like the hoppiness of it.

Well, readers, clearly some mixed opinions here, but overall they’re pretty positive. We’re proud of every hard-won bubble in these bottles, that’s for sure.

Plus, this beer will probably taste great with the herb quiche we’re making for our upcoming spring feast.