By Margo True, Sunset food editor In an attempt to create a more substantial one-block feast, one that won't have us ordering Chine... 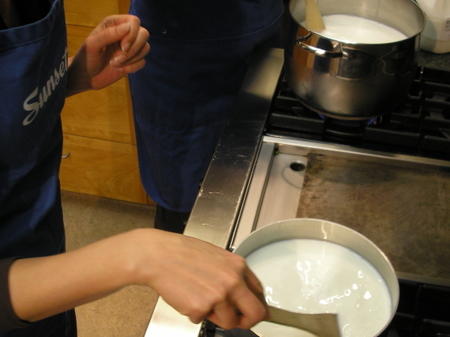 In an attempt to create a more substantial one-block feast, one that won’t have us ordering Chinese an hour later, we’re going to add some cheese to the menu. Mozzarella came to mind first, because it’s so tremendous with ripe tomatoes and basil. But it seemed like a slightly tricky one to make and perhaps a wee bit painful. We’ll save it for when we’re more, er, experienced.

So, we did what most people do when they’ve never made cheese before: We got ourselves a copy of the invaluable Home Cheese Making by Ricki Carroll, first published in 1982 and re-released in 2002.

Then, the question of ingredients. Since we weren’t raising any kind of milk-providing animal, we were going to have to “import” some milk. California law prevents us from buying directly from the nearest owner of cows, goats, or sheep (milk can only be sold to the public from a licensed store).

We’ve ended up with probably the best milk commercially available, from Straus Creamery, in Tomales Bay, California. Straus was the first certified organic dairy west of the Rockies, and the Straus family’s big-picture wisdom and energy has helped save huge portions of that beautiful area from development. And their milk is really, really good (Cowgirl Creamery uses Straus milk to make their award-winning cheeses). We’re thinking of the milk as an “import” that we’ll transform into a different food ourselves, to make it as personal as the rest of what we’re going to eat.

Besides milk, all we have to make cheese is what we have from the garden: lemons, a variety of herbs from the garden, and salt (which we hope to make ourselves too, though it’s seeming crazy to try).

Team Cheese came together as quickly as a batch of fresh curds, and we divided up to make a few of Carroll’s recipes. Our plan: to make our own versions of the cheeses we liked best.

Warming up plain milk was the first step for all four recipes we attempted.

* Lemon cheese (meant to be moist, with a “spreadable consistency and a mild, lemony flavor” according to the headnote);

* Chenna (an Indian cheese “kneaded while still warm into a light, velvety smooth, whipped-cream consistency. It is an essential ingredient in many Bengali sweets”)

Our results (doubtless skewed by the fact that we had no heavy cream, no cheese salt or citric acid, and no vinegar:

* Lemon cheese: A winner, though ours was crumbly and fluffy. It seemed a lot more like Mexican queso fresco, possibly because we decided to whisk the curds vigorously as soon as they’d set, and to add minced fresh oregano. We were trying to come up with a plausible topping for a Mexican-style corn soup–and this seemed to work.

* Queso blanco: we totally lost control of the temperature, which needed to be between 185° F. and 190° F. I’m not sure what we ended up with, but curdling required a vast amount of lemon juice (again, to be fair, the recipe specified vinegar). Kinda rubbery.

* Whole-milk ricotta: Not so different from the lemon cheese. Again required way more lemon juice than expected, just to get a curdle going…an accidental boil sealed the fate of this cheese. “Hard and gritty!” read the notes on the recipe.

* Chenna. A hit. The unusual technique of kneading the curds didn’t produce “whipped-cream consistency” for us–it was more like cream cheese–but we folded in some chopped chives, rolled it into a log, sliced it, and had a very acceptable stand-in for fresh mozzarella.