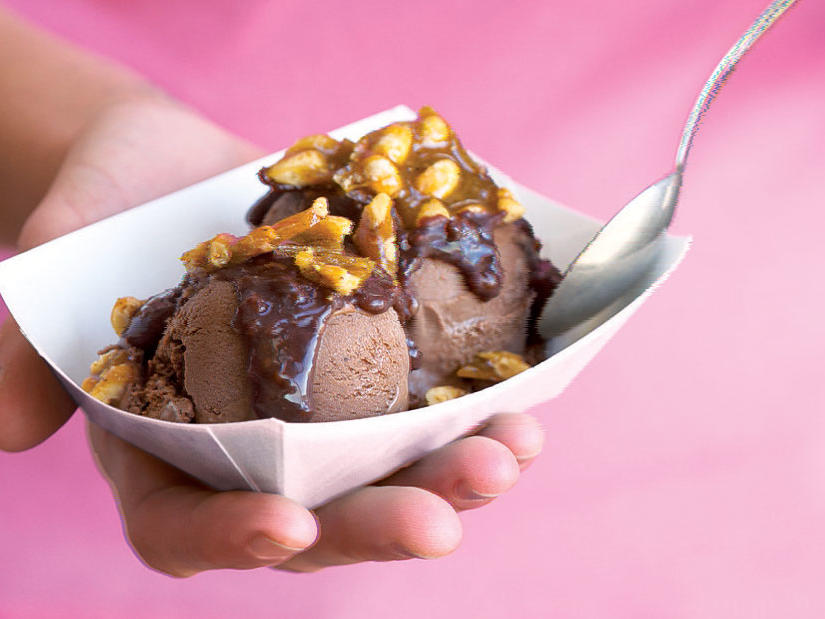 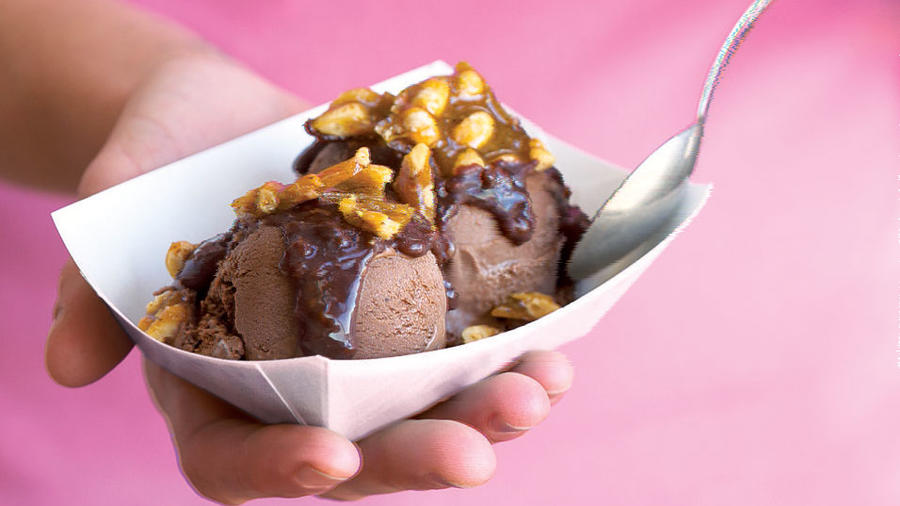 It’s one of my favorite stories to have ever run in Sunset magazine. Through sheer grit and a large helping of talent, Jen Castle and Blake Spalding, practicing Buddhists in Mormon country, managed to charm the town of 200 into accepting them—and they did it through ice cream.

Here for your reading pleasure is that story from July 2007, with a followup interview with Blake at the end. The sundae social, scheduled for July 3rd this year, is still going strong, and anyone can go.

The remote town of Boulder, Utah, dishes up all the ingredients of a rural Fourth of July: American flags wave from fence posts, flatbeds—typically reserved for hauling farm supplies—are reborn as parade floats, and children compete in watermelon-eating contests. But at Hell’s Backbone Grill, the town’s award-winning restaurant, the ingredients that matter most are the ones sprinkled and spooned on ice cream.

When Jen Castle and my sister, Blake Spalding, moved to Friends said it couldn’t be done. Not in a tiny town 250 miles south of Salt Lake City with more horses than people (the 2000 census recorded Boulder’s population as 180). And yet Boulder is surrounded by the Grand Staircase–Escalante National Monument, which attracts a steady stream of tourists; it is home to the eco-friendly Boulder Mountain Lodge; and it is a traditional Mormon farming community, rich in soil, produce, and pioneer values. Jen and Blake saw abundance there.

And so the two business partners, who had met and become friends while catering in Flagstaff, Arizona, arrived in Boulder and began cleaning, decorating, stocking the kitchen, and designing menus. After months of hard work, eager to open their doors, Jen and Blake posted a help-wanted sign. But people in town were wary. They’d had a contentious history with other restaurant owners and feared more culture clashes and misunderstandings. Jen and Blake’s sign got virtually no response. 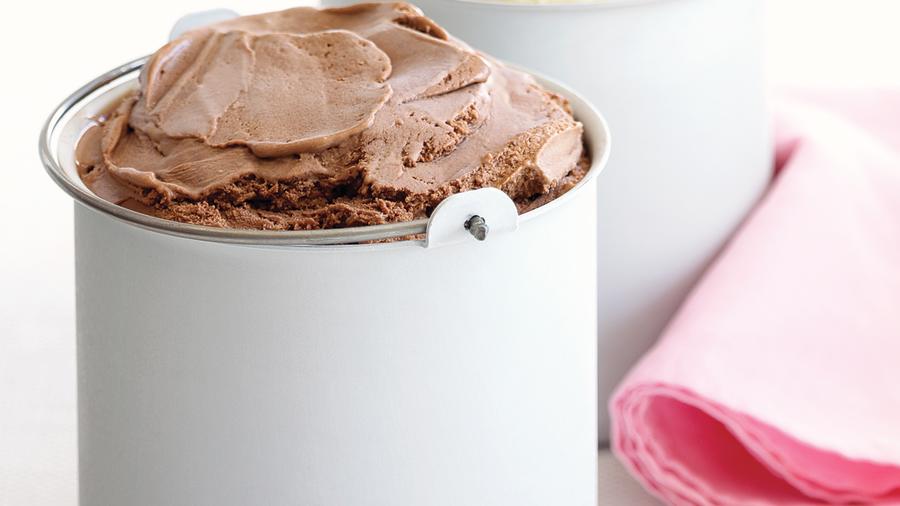 With the usual method not working, it appeared a more neighborly approach was  in order. “In a small Mormon town, you meet people by attending church,” says Jen. “We’re not LDS [members of the Church of Jesus Christ of Latter-day Saints], so that would have felt inauthentic. For us, hosting a party was the natural solution, and an ice cream social was the kind of event that included everyone. We wanted to inspire trust.”

Jen and Blake hung posters inviting everyone. Then they set up tables outside, waited nervously with gallons of ice cream, and watched in shock as carloads of families arrived. The mayor later told them he’d never seen so many townspeople gathered in one place. Gradually, locals started visiting the restaurant and applying for jobs. With help from a few Flagstaff friends, the restaurant was soon fully staffed. 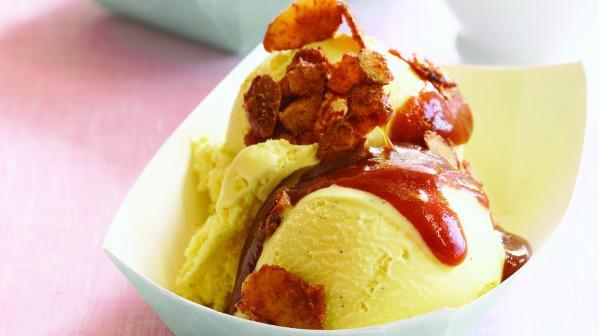 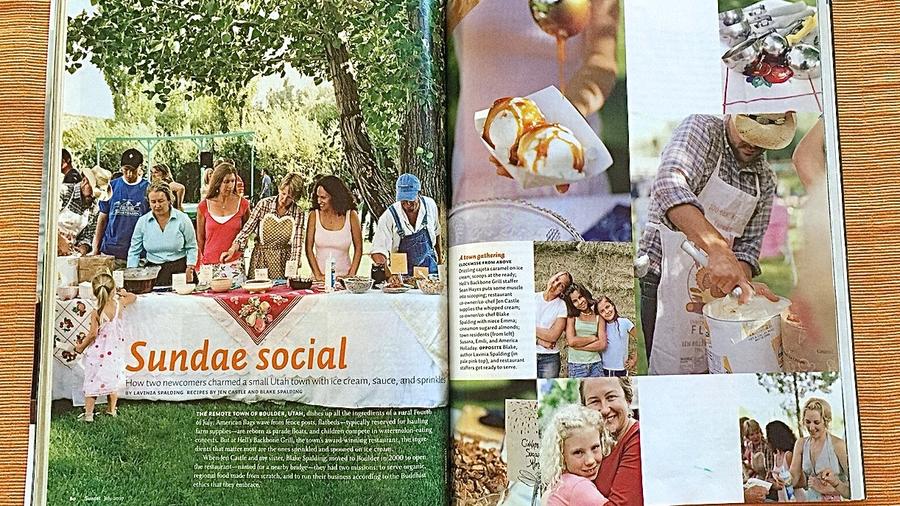 “Sundae Social,” from our July 2007 issue. (Photograph by Margo True)

Today Hell’s Backbone Grill is Boulder’s largest employer, with 35 workers during the peak tourism season. I live here full-time now, having traded San Francisco for Boulder in 2005. The restaurant has its own organic farm, which our brother now runs, and we published a popular cookbook, With a Measure of Grace: The Story and Recipes of a Small Town Restaurant (Provecho Press, 2004; $30).

Meanwhile, the ice cream social has become an annual tradition. It has also grown to include a talent show, with acts ranging from cowboy poetry to car-alarm impressions. Last year, two earnest young girls belted out “Battle Hymn of the Republic,” after which a restaurant employee performed a bongo-backed interpretation of Gil Scott-Heron’s poem “The Revolution Will Not Be Televised.” Between these acts, a cowboy hypnotized a chicken.

As evening fell, everyone gathered beneath a magnificent desert sky to enjoy a fireworks extravaganza sponsored by the lodge. It was the cherry atop a perfect day.

An update from Blake:

We keep the ice creams pretty much the same from year to year. We usually do crushed brownie topping along with the salted caramel and the fudge sauce. Often we’ll do fresh strawberry sauce with the berries from our farm…last year we grew 18,000 pounds of produce!

We do sundaes from 6 to 7, and then everyone settles on the lawn and we start the talent show promptly at 7. We used to have fireworks afterward, but the town canceled those [due to drought]. So now the Patrick Briggs band plays—they’re really good—and it turns into a big town dance.

Anyone can come; it’s our big Buddhist giveaway. No charge. We call it Interdependence Day, when we make friends and keep old ones.”