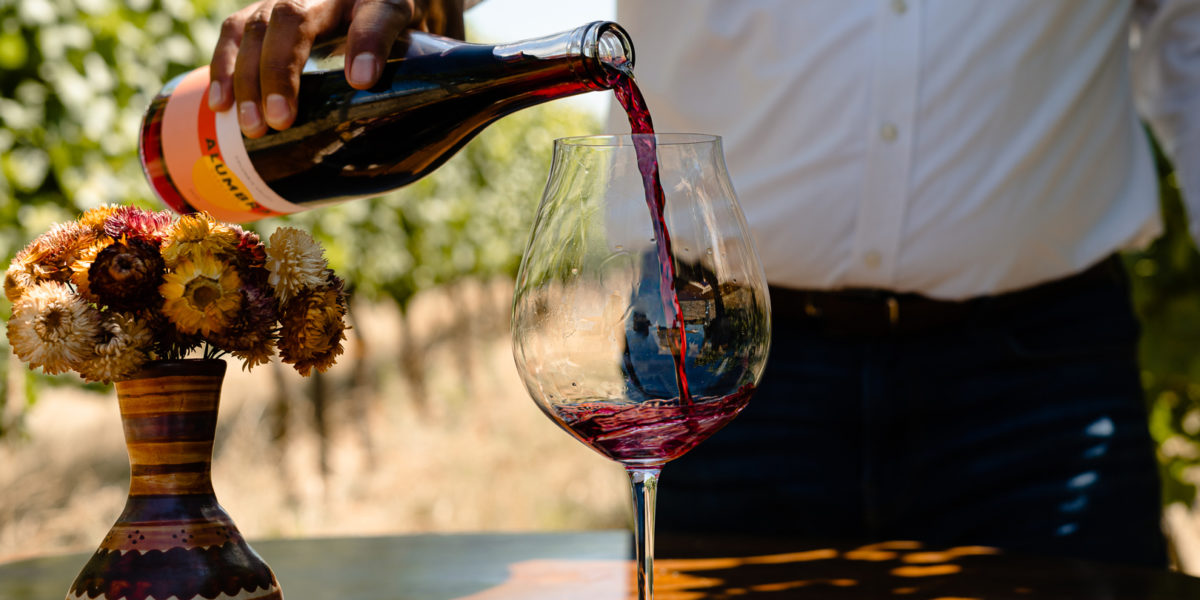 Alumbra Cellars winemaker and president Elena Rodriguez took over the vineyard from her father, who planted it after leaving his native Mexico.
Written by Kristin Scharkey October 5, 2021
Share this story

The red blend boasts a “bit of smokiness” and “well-balanced” acidity that creates “bold” flavors alongside ostiones zarandeados with chiles, smoked butter, and blue corn, Chavez says. The pairing was part of a tasting dinner at Alumbra Cellars’ Willamette Valley vineyard—a series Rodriguez and Chavez aim to resume once the weather warms.

A chance visit brought the two Oregon women together, but family—both of their fathers grew up in the Mexican state of Durango—is what makes Alumbra “feel like home,” Chavez says.

Rodriguez left nursing to cultivate the vineyard planted by her father, Baudelio Rodriguez, Sr., a “true farmer” who didn’t make wine, she says. But growing up there helped Elena “understand the skilled work it takes to care for a vineyard. So she and her brother, Leo, launched Alumbra, which roughly translates to “shine” in Spanish.

“The vineyard process has been eliminated from the tasting room experience, that is where I saw my intention in winemaking,” Rodriguez says.

Today, a rustic white tent for tastings—or pop-up dinners—sits amid the family’s dizzying rows of vines, a space that feels both “honest” and “pure,” according to Chavez. Rodriguez crafts a Pinot Noir, a Rosé, and more that pair well with spicier foods, like flavorful moles or chicharrón. The Mitote gets its name from her grandmother, who late in life spoke in her Indigenous dialect about a harvest celebration among the Tepehuán people, according to Rodriguez. Alumbra wines are “delicate” and “nuanced,” Chavez says.

When she’s not tending to vines, Rodriguez works with nonprofit Asociación Hispana de la Industria del Vino en Oregon y Comunidad, or Ahivoy, to provide free viticulture education to vineyard stewards in the Willamette Valley. She works at English-immersion classes as a mentor and resource who can assist in Spanish. In addition to furthering technical knowledge, the program may help break down communication barriers for workers who are already “very knowledgable,” Rodriguez says.

“They are the most open, kind, generous family,” Chavez says of Rodriguez and family. “Her wines truly reflect that spirit.”

Alumbra Cellars is part of Celebrating Hispanic Roots, an annual Oregon event during Hispanic Heritage Month. The event aims to “display the diversity of the Hispanic cultures,” organizers said, “and as small business owners, give back to the Spanish-speaking community in Oregon.”

These Are Our Favorite Wine Shops in the West