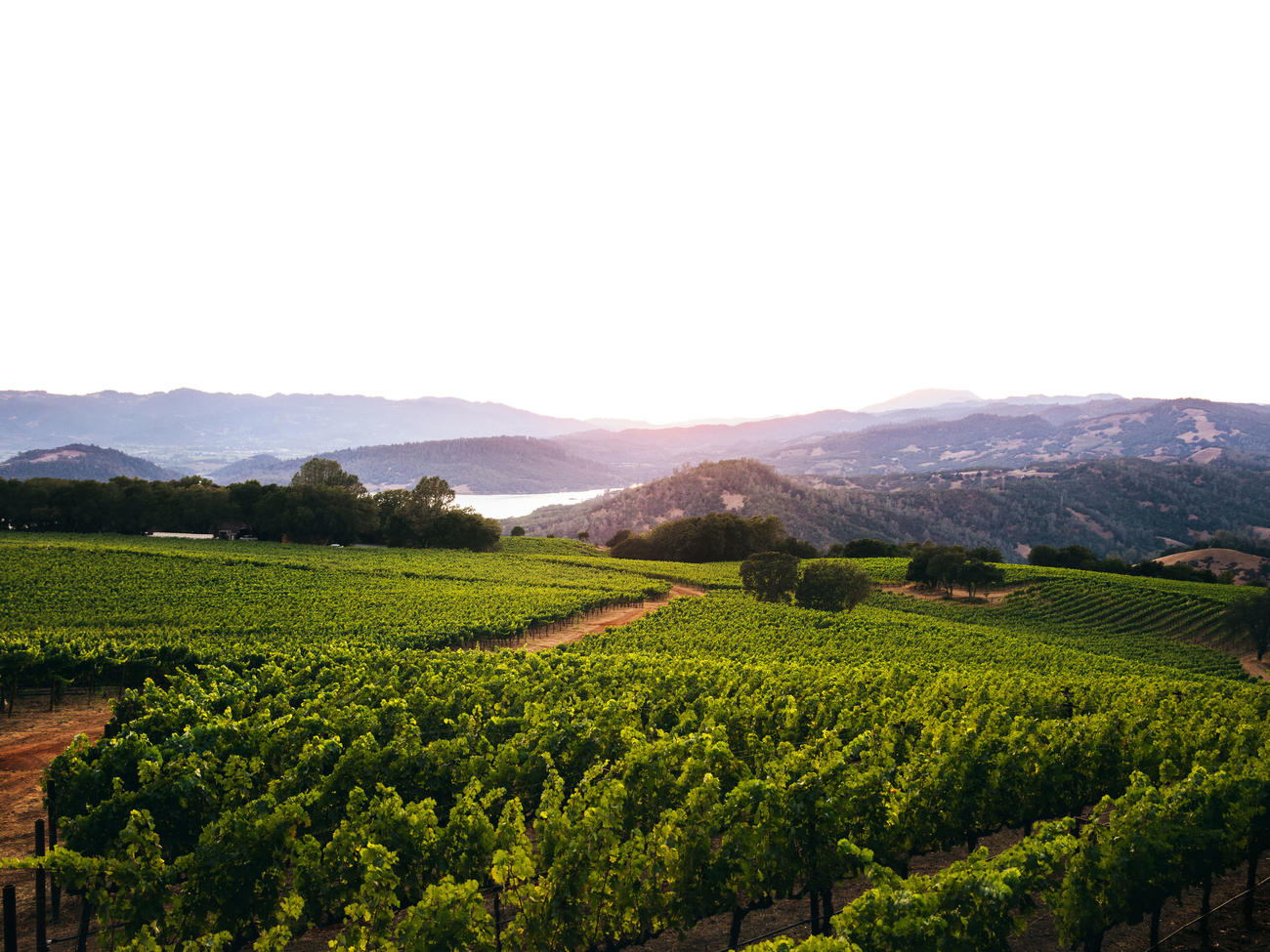 Napa Valley is in a class by itself among America’s wine regions. There are some 500 wineries in the 16 subappellations that make up the 30-mile-long, 5-mile-wide valley. They include the historic, such as Stag’s Leap Wine Cellars, whose Cabernet Sauvignon demolished an array of French Bordeaux in the 1976 Judgment of Paris, thereby putting Napa firmly on the world wine map. They include the very luxe: A few of the wines produced here can go for $1,500 a bottle.

Napa’s popularity and those prices can make the valley seem intimidating to people who just want to spend a fun day tasting wine. The crowds are real—try turning left onto Highway 29 on a busy weekend. And at times, the pretensions have been too. But recent forays have revealed a new Napa—still serious about wine but willing to cut loose a little.

Learn to navigate the valley, and you’ll realize that it’s still the best place in the world to fall in love—deeply, lastingly in love—with wine. Visit, sip, savor. You’ll make your own wine memories, potent and pleasurable.

Starmont Winery & Vineyards. In the Carneros region south of Napa, Starmont offers just what the valley needed: accessibly priced wines and a younger vibe. The general Carneros wines are deals; the single-vineyard Pinots and Chardonnays, compelling. And the handsome, reclaimed-wood and concrete tasting room has a bar that can roll right out to the patio firepit. Tasting from $20; 1451 Stanly Lane; starmontwinery.com. We recommend: Starmont 2013 Stanly Ranch Pinot Noir (Los Carneros; $55).

Andaz Napa. Recovering quickly from the battering it took in the 2014 earthquake, downtown Napa has become a place to land and linger, with excellent restaurants and an increasingly vibrant music scene. Andaz fits the new setting, with its walkable location and small but elegantly modern rooms. From $329; andaznapa.com.

Torc. Downtown Napa had already become dining heaven—with big city–caliber restaurants like Morimoto and La Toque—when Sean O’Toole introduced another stellar round. The menu at O’Toole’s Torc harmoniously roams the world, with dishes like Indian sweet-potato pakora, Japanese hamachi crudo, and heritage porchetta with Mexican huitlacoche (a mushroomlike fungus). All this and a terrific Negroni too. $$$; 1140 Main St.; torcnapa.com.

La Taberna. From the owner of ZuZu, a beloved Spanish restaurant down the street, this tapas bar would be at home in San Sebastián. Scan the printed menu for your drinks, including sherries, beers, and an eclectic list of international wines. Food options are chalked on a board above the bar: pintxos like jamón ibérico de be­llota, smoked trout, and pato (duck) empanadas … you can’t go wrong. $$$; 815 Main; latabernanapa.com.

Senza. Craig and Kathryn Walt Hall of Hall St. Helena reworked an existing B&B into a luxurious boutique hotel and spa. At the property’s core is the restored 1870s Parker Mansion, where rooms off-season can be a stealth deal (as low as $219) if there’s a late-breaking vacancy. From $379 otherwise; senzahotel.com.

B Cellars Vineyards and Winery. B is a welcome addition to Napa’s Golden Mile—the stretch of Oakville Cross Road between Highway 29 and Silverado Trail that’s home to some of the valley’s most revered labels, among them Groth, Silver Oak, and Rudd. It makes the most of the tony address with rich red blends that you taste in sleek new wine caves or in the winery garden. But it’s about food too. A demonstration kitchen gives you a barside view of what the chef is cooking for your wine pairing—dishes that capitalize on the produce from B’s kitchen garden and the fresh eggs from its well-heeled chickens. Tasting from $35; 703 Oakville Cross Rd.; bcellars.com. We recommend: B Cellars 2011 Blend 25 (Napa Valley; $64).

Raymond Vineyards. Talk about a makeover. Much loved but styled along the lines of a ’70s dentist office, Raymond has been reinvented by Jean-Charles Boisset, scion of one of France’s prominent winemaking families and husband to California wine aristocrat Gina Gallo-Boisset. “We don’t just make wine … we create dreams!” Boisset says. At Raymond, the dreams now include a Champagne lounge with a gold-flecked resin floor and karaoke, and Louis XIV–style furniture under the trees. But there’s also a serious appellation-education room, a lab for blending your own wine, and a demonstration biodynamic garden with an app to guide you through it. And you can even bring your pooch to the doggie winery run by Boisset’s French bulldog, Frenchie. Tasting from $25; 849 Zinfandel Lane; raymondvineyards.com. We recommend: Raymond 2012 District Collection Cabernet Sauvignon (Rutherford; $85).

Hall St. Helena. Bunny Foo Foo—the local nickname for a 35-foot-tall stainless steel rabbit—towers over the entrance of Hall St. Helena. It’s one of a series of eclectic modern art installations around and in this contemporary winery. But, says Kathryn Walt Hall, former U.S. ambassador to Austria and owner with her husband, Craig, “We aren’t a museum. Art is just a context for wine here.” That wine includes beautifully crafted Napa Cabs (and some Pinot Noirs from Anderson Valley) you sample in an upstairs tasting room with terrific views from valley-floor vineyards up into the Mayacamas Mountains. Back downstairs, you can take in food and wine workshops by local chefs in Hall’s demonstration kitchen. $30 tasting; 401 St. Helena Hwy. S.; hallwines.com. We recommend: Hall 2012 “Kathryn Hall” Cabernet Sauvignon (Napa Valley; $150).

Harvest Table. Celebrity chef Charlie Palmer made his Napa Valley debut with this restaurant at Harvest Inn. Casual dark-wood tables in front of a massive stone fireplace provide an autumnal setting for the seasonal produce (much of it grown in Harvest’s culinary gardens) and local meats Palmer employs in his version of wine-country cooking. We go for the roasted baby carrots in a buttermilk sauce seasoned with Indian vadouvan spices; the grilled octopus with fingerlings and charred lemon; and shrimp and grits. And don’t shy away from what the menu calls “crispy pork head”: The little fritters in tangy gribiche sauce are addictive. $$$; 1 Main St.; harvesttablenapa.com.

Archetype and Goose & Gander. Restaurant Archetype was launched by winery architect Howard Backen, and its light-filled, rustic design matches the comfort of the menu. Lunch is a treat; it’s tough to choose between the Reuben—with corned beef made from short ribs—or the baby-back-rib sandwich (boneless with hoisin on a steamed bun, pork-belly fried rice on the side). At dinnertime, go for the butter-rich eye-of-rib bone marrow, with sweet charred onions and grilled-bread salad. Then, for your nightcap, head to the basement bar at Goose & Gander and Scott Beattie’s rosemary pear shrub. Archetype: $$$; 1429 Main; archetypenapa.com. Goose & Gander: $$$; 1245 Spring St.; goosegander.com.

Clif Family Winery. Velo Vino, the tasting room for Clif Family, has a twofold mission: to introduce you to their wines (some of the best of which are from Howell Mountain) and to get you on a bicycle. Have the staff customize your ride, then grab some snacks to go (these are the folks who brought us Clif Bars, after all). On your return, taste a little, buy a bottle, and head out to the wildly popular bruschetta truck. $20 tasting, bruschetta $; 709 Main; cliffamilywinery.com. We recommend: Clif Family 2012 “Gary’s Improv” Zinfandel (Howell Mountain; $38).

Joseph Phelps Vineyards. It’s worth making an appointment to experience this renewed Napa classic. A complete remodel has produced one of the loveliest tasting rooms in the valley, soaring and open but with surprisingly cozy tasting spaces carved out inside. In the 1970s, founder Joseph Phelps was the first to produce a Cabernet-based, Bordeaux-style blend in California. Phelps, who died this year, named the wine “Insignia,” and it came to be regarded as one of Napa’s ground­breaking reds. His son, Bill, hasn’t let anything slip: Insignia is still the prototype. Tasting from $75; by appointment only; 200 Taplin Rd.; josephphelps.com. We recommend: Joseph Phelps 2012 “Insignia” (Napa Valley; $240).

The Restaurant at Meadowood Bar. Napa Valley has two chefs who’ve been awarded three Michelin stars. Thomas Keller is one, of course, for The French Laundry. The other is Christopher Kostow, presiding over The Restaurant at Meadowood. If you don’t want to drop multiple hundreds in one evening, settle in fireside at the bar and order his three-course menu. For less than $100 (okay, very little less), you’ll taste how celestial seasonal food—with a focus on the garden—can be in three-star hands. $$$$; 900 Meadowood Lane; meadowood.com.

Cairdean Estate. If you visited the valley in the decade leading up to 2015, you probably passed a defunct outlet mall north of St. Helena. Now Stacia and Edwin Williams have transformed it into something unusual: a complex of winery and caves, tasting room, bakery and deli (Butterscots), restaurant (The Farmer & The Fox), and retail and gallery space. The range of wines is broad, the views from the tasting room are exceptional, and the cave you tour is one of the valley’s longest. $25 tasting; 3111 St. Helena Hwy. N.; cairdeanestate.com. We recommend: Cairdean 2011 Atlas Peak Syrah (Atlas Peak; $40).

Calistoga Inn, Restaurant & Brewery. Restored after a fire, the 1887 Calistoga Inn is a good value for the valley. Rooms are spare (no phones or TVs) but sweet. Bathrooms are shared but as private as anything you’d find in a spa. Downstairs at the restaurant and brewery, you can even skip wine for a while: Brewmaster Brad Smisloff produces delicious wheat ales, pilsners, red ales, and porters. From $129, restaurant $$$; calistogainn.com.

Tamber Bey Vineyards. A former executive at AOL and Apple, Barry Waitte likes wine. He also likes horses—in fact, he competes in a grueling event known as “endurance horse racing.” When he decided to retire from Silicon Valley, it was only natural that he start a winery in a prestigious horse-training center, Calistoga’s Sundance Ranch. Step into Tamber Bey and you’ll taste wines in a courtyard surrounded by some pretty classy stables. And the wines that Waitte and his wife, Jennifer, produce are dark, earthy thoroughbreds too. $25 tasting; 1251 Tubbs Lane; tamberbey.com. We recommend: Tamber Bey 2013 Deux Chevaux Vineyard Merlot (Yountville; $75).

Evangeline. From chefs Brandon Sharp and Gustavo Rios of Solage’s Solbar, this neighborhood bistro is for those with a Creole soul. It might be the right place to break your foie gras fast (in California, at least) with a mouthwatering version accompanied by seasonal fruit and toasted brioche. Satisfying mains include expert versions of poulet grand-mère (that would be Grandma’s chicken) or braised pork shoulder. But to taste the true South, follow the rotating specials: shrimp étouffée, gumbo ya-ya—any of them even better with a side of fried pickles. $$$; 1226 Washington St.; evangelinenapa.com.