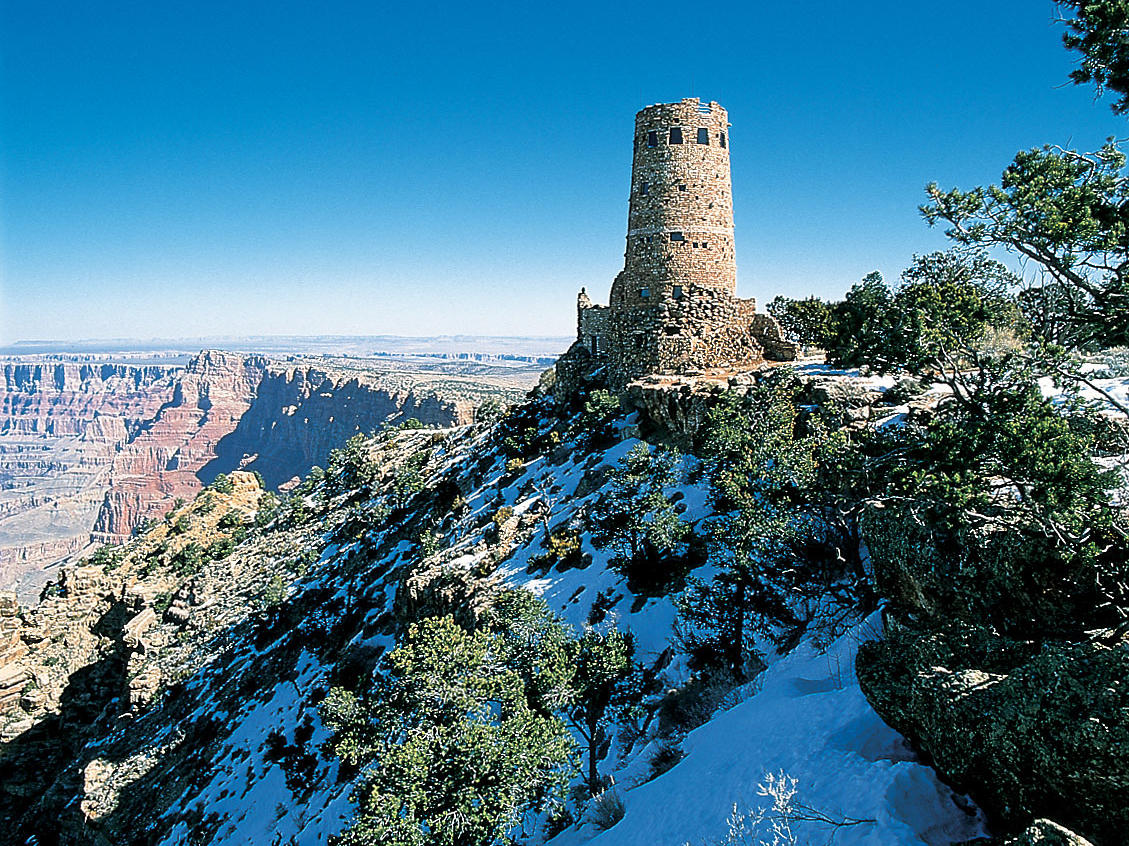 Early one winter morning at the Grand Canyon, a soft crunching sound breaks the silence. A glimpse through the drapes reveals a pair of deer walking just outside the window. With each step, their hooves press lightly, then break through the icy crust atop the shallow snow. It’s hard to imagine a more gentle awakening.

Heading out onto the park’s Rim Trail only enhances the meditative mood. As the sun begins to light the towers and temples and the first warmth of day penetrates the cold, no one is out on the trail.

During most of the year, the South Rim feels like a desert, despite its elevation of 7,000 feet. But now, even in this driest of years, snow from a recent storm etches the canyon’s infinite rock terraces white, giving the normally desertlike canyon a decidedly high-country feel. Snow weighs heavily along the branches of ponderosa pines and buries a yucca to the tips of its spears.

Absurd as it may sound, in the silence of winter, this vast space―277 miles long and averaging a mile deep―actually feels intimate. Come November, the high-season horror of traffic jams subsides, and the park settles into a quieter rhythm. Typical winter attendance is less than a third―sometimes even a fifth―that of peak season.

After 4 miles of walking, the first signs of human life appear in the form of mule riders wearing vivid yellow jackets, starting down on the Bright Angel Trail. They’ve heard extensive do’s and don’ts from the wranglers, which clearly haven’t been sufficient for one rider.

“Sir! Put that camera away. You’re either riding or taking pictures, but you’re not doing both. Dang! I don’t know why these people don’t get out in the real world sometimes. Quit watching TV and all.”

Unusual perspectives, inside and out

The canyon is not the only thing there is to take in. Especially on the occasional inclement day, it would be a shame not to spend some time exploring the park’s vintage Southwest architecture―most notably the work of Mary Elizabeth Jane Colter.

Colter designed six landmark buildings near the South Rim between 1905 and 1935, creating some of the finest architecture anywhere in the national park system. Her buildings coexist unobtrusively with the environment―thanks to the use of local stone―and with the native cultures of the Southwest.

When you arrive from the east, the first Colter structure you see is the Watchtower. Stop to take in the panorama―one of the best in the canyon, with a long stretch of the Colorado River clearly visible 5,000 feet below.

Inside the Watchtower―a re-creation of the kind of Ancestral Puebloan towers found at Mesa Verde and Hovenweep on the Utah-Colorado border―huge picture windows frame the landscape, turning the building into a gallery of canyon vistas.

You ascend the circular staircase through a series of rooms painted with traditional designs by Hopi artist Fred Kabotie. Near the top there are more canyon views, but the sand paintings depicting Hopi legends, and the design of the building itself, have a way of commanding your attention. Colter and Kabotie have managed the impossible, if even for a few minutes. They have upstaged the Grand Canyon.

The canyon has a paradoxical quality. It seems most familiar, most easily known, when you first arrive. But the longer you spend in contemplation of its immensity, the more elusive it becomes. And so you decide to explore, maybe hike below the rim on the South Kaibab Trail or Hermit Trail. That’s when the futility of trying to know the canyon becomes obvious.

A half-day’s trek will take you just halfway to the bottom of the gorge, in which time you’ll see only a couple of the canyon’s dozen or so exposed rock layers, leaving a billion years of geology still unexplored. Even more humbling are the innocuous-looking patches of snow and ice on minor slopes that can turn a walk into an extreme-sport adrenaline rush. As for the walk back up to the rim, well, at least it’s not that hot in winter.

With no further illusions of conquering the canyon, you’ll be tempted to head inside, where you can watch the international parade of visitors from the comfort of the lobby at El Tovar Hotel, the South Rim’s grandest lodge. But inevitably, the canyon will lure you back out for yet another look.

Seen from the Yavapai Observation Station, an ominous, low, almost black cloud begins to blanket the canyon, while a bright turquoise sky remains visible to the west. Tendrils of mist drop from the cloud, slipping into canyons beneath the rim, veiling the cliffs. As the line between land and sky becomes obscured, the canyon seems primed for a storm. But by dusk the cloud has passed through, leaving high wispy clouds alone in the sky and the starry promise of the coming winter night hanging in the air.