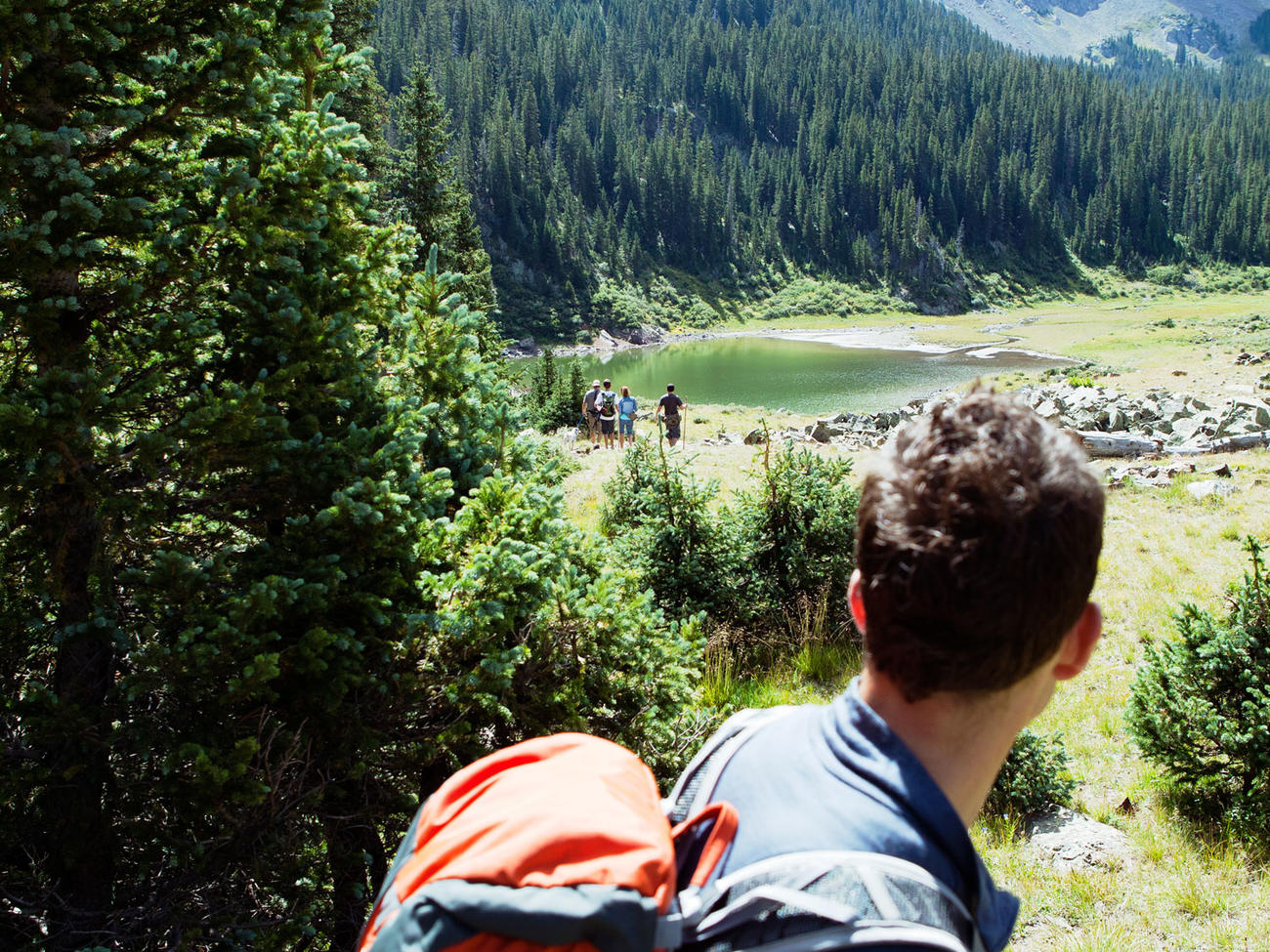 Most visitors whiz through Taos on a day trip from Santa Fe, spending a few hours poking around trinket shops on the downtown plaza, never getting a feel for the real village. But northern New Mexico’s artsy, eclectic, outdoorsy outpost reveals its true self slowly.

To skip the awkward getting-to-know-you phase and explore Taos like a local, we enlisted the help of Cody West, a green developer and Carmel, California, native who’s made Taos his home for the past 15 years. Cody lives with his wife, Maija, a land-use lawyer, and their 6-year-old daughter, Eva, a couple of blocks off the plaza, in Central Station, Taos’s first sustainable live/work compound (complete with electric car plug-ins). “Our life is pretty simple,” says Cody, whose com­­pany, Group 3, will start building micro homes this summer. “We hike and bike in summer, ride to the market, go to concerts, hang out at the river, eat good food with friends, and play with our kids.”

Sounds good to us. Here, then, are Cody West’s four paths to a perfect weekend in Taos.

On Saturday mornings all summer, the Taos Farmers Market (8 a.m.–1 p.m.; 575/751-7575) buzzes with northern New Mexico growers and ranchers. Rent a bike at Gearing Up (from $25 for a half-day; 129 Paseo del Pueblo Sur; 575/751-0365) and ride to the market, located in the town hall parking lot next to the library. Cody and Co. head straight for Tina Leonard’s stand for homemade carne asada breakfast burritos, then pick up organic grass-fed beef from Colorado rancher Lucas Salazar. Once you’ve been to the source, you’ll want to go to the school: Chef Chris Maher’s Cooking Studio Taos (from $98; cookingstudiotaos.com) offers private and group classes in northern New Mexican cuisine. The longtime Taos restaurateur will school you in the fine art of wrapping sticky masa dough in cornhusks for tamales and in baking bizcochitos, anise-flavored cookies.

2. Head for the hills

Get an alpine start to beat the afternoon thunderstorms on the gradual 2-mile hike to Williams Lake, at 11,300 feet in the high country above Taos Ski Valley. (Says Cody, “Eva can make it to the lake, no problem.”) The trail parallels the Rio Hondo upstream to the lake. From there you can look up at New Mexico’s highest point, Wheeler Peak; if you’re feeling ambitious, follow the faint goat path that scrambles up the scree field on the north side of the tarn to the summit above, with views 60 miles north to Colorado. Afterward, lounge your legs on the cushy chaises outside the Bavarian Lodge ($$; 100 Kachina Rd., Taos Ski Valley; 575/776-8020), at the base of the trail. “Stay for a pint of hefeweizen wheat beer and the sausage platter,” says Cody. They’re served—in a scene straight out of Austria—by waiters in lederhosen.

Fuel up for the day at World Cup Cafe (102 Paseo del Pueblo Norte; 575/737-5299), a micro coffeehouse just off the plaza where, says Cody, “everybody knows each other and the owner is a connoisseur of the perfect pour.” Then pack a bathing suit and get picnic lunch from Cid’s Food Market (closed Sun; 623 Paseo del Pueblo Norte; 575/758-1148) for a morning on the Rio Grande. Stake out a shady spot beneath a cottonwood on a sandy stretch of shoreline in Orilla Verde Recreation Area ($3 per vehicle), where the river’s mellow enough for Cody to take Eva out for a ride on his stand-up paddleboard. Or hook up with iconic Taos riverman Cisco Guevara at Los Rios River Runners for a guided half-day raft trip ($50; losriosriverrunners.com). Back in town, cool off beneath the wooden portals on the plaza and prowl the shelves at Twirl (225 Camino de la Placita; 575/751-1402), crammed with kites, capes, crafts kits, puzzles, and other cool toys; Twirl’s expansive play space offers free drop-in music and art classes and a treehouse.

Taos was an arts colony long before Georgia O’Keeffe landed in New Mexico in the late 1920s, and it still supports an impressive mix of traditional painters, contemporary visual artists, and art galleries for a town of only 6,000. At Parks Gallery (110 Paseo del Pueblo Norte; 575/751-0343), vivid watercolor landscapes by Jim Wagner share wall space with paintings, sculpture, and mixed- media works by the late Melissa Zink, a longtime Taos local. Over at Studio de Colores Gallery (119 Quesnel St.; 575/751-3502), Ed Sandoval’s vibrant paintings of northern New Mexico are practically larger than life. So is the artist himself: The Taos resident sometimes dons a black cape and rides his Arabian horse through town to breakfast. “He’s like a real-life Zorro,” Cody says. Cap the day at the rave-worthy Love Apple ($$; 803 Paseo del Pueblo Norte; 575/751-0050) for a beet, avocado, and grapefruit salad and rainbow trout baked in a cornhusk, followed by live music and a fresh-squeezed lime juice Cowboy Buddha margarita at the Historic Taos Inn (125 Paseo del Pueblo Norte; 575/758-2233). Cody says, “Get there early if you want a seat.”

Mabel Dodge Luhan House. A rambling inn that once served as a creative salon for visiting artists and writers like Georgia O’Keeffe and D.H. Lawrence. From $98; mabeldodgeluhan.com