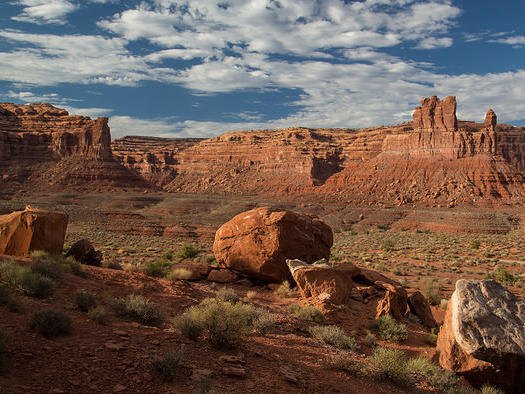 Valley of the Gods, in southeastern Utah. (Photo by the Bureau of Land Management, via Flickr.)
Written by Sunset August 8, 2004
Share this story

From Bluff, we slide southwest into Arizona, past worthy detours: Goosenecks State Park and Valley of the Gods. Then the carmine mesas of Monument Valley Navajo Tribal Park rise into view.

For generations of moviegoers, this is the American West. John Ford directed the film Stagecoach here in 1939, then followed it with My Darling Clementine and The Searchers. But for its Navajo inhabitants, the valley is no mere movie set. It is home. To spend time here is to suspend yourself between myth and reality in a way impossible anywhere else.

Not far away is another reminder of the deep roots of civilization in this land: Navajo National Monument, its Ancestral Puebloan dwellings worth the 5-mile hike it takes to see them up close. Then we veer northwest to Page, Arizona.

In Page, old West and new collide. The John Wesley Powell museum celebrates the man who led the first expedition down a wild Colorado River. Today, the Colorado has been tamed by the Glen Canyon Dam. The dam’s curving white face rises 710 feet; beside it, high-tension power-line towers, looking like gigantic Hopi katsina dolls, march across the desert to carry electricity to Phoenix and beyond.

Back on the road, we begin the drive to the North Rim of the Grand Canyon. Tom suggests a side trip to Vermilion Cliffs National Monument. He wants to see the observation station for the California condors; wildlife biologists have periodically released birds into this area since 1996.

It’s getting late, so I veto the detour. “You know,” I say, “I’m always in places where there are supposed to be condors, and I’ve never seen one. Not one.”

By the time we reach the deck at the Grand Canyon Lodge, the air has taken on an energizing chill. There’s a palpable serenity as people from all over the globe settle into the rough-hewn chairs to ponder the view of the North Rim of the Grand Canyon. Heaven should be so mellow― and also serve cold beer.

Out on the Transept Trail, we edge along one of the rocky peninsulas that reach into the canyon’s emptiness. We pause when a bird soars overhead, 20 feet above us. A huge bird, a primordial winged thing, with a bare pinkish head and white markings along the undersides of its wings. Apparently ― but not definitively― a condor.

And so, on our way back home, we debate whether or not this beast of the skies was in fact a condor. In the end, we reach no conclusion, which is fine. Traveling through the red rocks and the rainbow canyons, you make a journey that is about potential, into a land still wild enough for a condor and empty enough to hold all your imaginings. “Now is now,” my friend Tom says. And on this road, you never know what now will bring next.