There’s more to this snowy valley than skiing. Here’s what the locals are doing when they’re not on the slopes 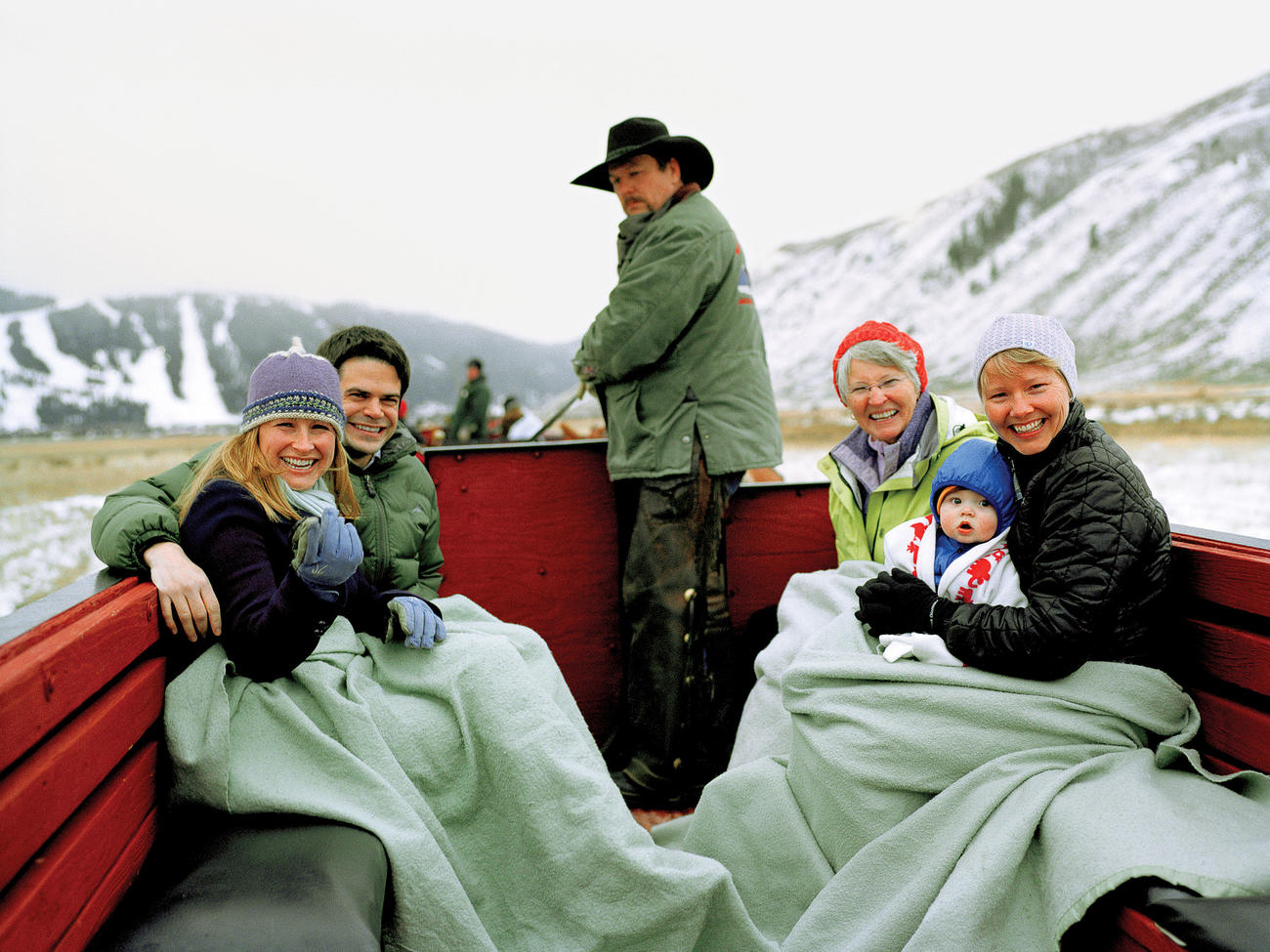 Jackson vs. Jackson Hole: Jackson Hole is an 80-mile-long, 15-mile-wide valley surrounded by wilderness, in which the largest town is Jackson.

Other towns in the Hole: Wilson, Moose, Kelly, Teton Village, and Moran. Cowboy cosmopolitan: It’s not nearly as chichi as Aspen, but Jackson’s gone pretty upscale in recent years (Sandra Bullock vacations here; CEOs have second homes here). But it’s still in touch with its western ranching roots and still draws a wider outdoorsy crowd. You’ll know you’re there when you see: Four lit-up antler arches at the corners of Jackson’s Town Square. Dress like a local: Practically everyone in town owns a pair of Alpine Utility Pants by local brand Mountain Khakis (mountainkhakis.com).  Airport bragging rights: Jackson Hole Airport is the only commercial airport in a national park (Grand Teton). A winter wildlife safari: The best way to mingle with the thousands of elk wintering on the National Elk Refuge, bordering town, is by two-horse open sleigh. Tucked under a blanket on the hourlong adventure, you’re surrounded. The secret? These elk are used to the sleighs, which have visited the herd for 45 years. Also keep an eye out for eagles, coyotes, foxes, bison, wolves, trumpeter swans, ducks, and geese. $18; buy tickets at 532 N. Cache St.; bart5.com An old-school shop: Hungry Jack’s General Store, up the road in teensy “downtown” Wilson, sells everything but the kitchen sink. Actually, they probably sell that too; it’s just buried in a happy jumble of kitschy belt buckles, ostrich cowboy boots, canoes, and locally made chocolates. 5655 W. State 22, Wilson; 307/733-3561.
Brown Cannon III
Indulge in a hearty meal at Nora’s Fish Creek Inn
The breakfast club: Notice the crowd across the street from Hungry Jack’s? Everyone from ranchers to Hollywood moguls and ski bums jostles for a table next to the soapstone Finnish hearth or a seat at the bar inside the 1930s log cabin of Nora’s Fish Creek Inn. You’ll understand why when you try the banana bread French toast. $$; 5600 W. State 22, Wilson; 307/733-8288.
Brown Cannon III
Savor a pint at the laid-back Silver Dollar Bar
Happy hour with the locals: Instead of the touristy Million Dollar Cowboy Bar, locals prefer the Silver Dollar Bar around the corner inside the Wort Hotel. The seats are comfier and the music more varied: From 7:30 to 11 every Friday and Saturday night, there’s a rockin’ mix of country and bluegrass. $; 50 N. Glenwood St.; 800/322-2727.
Brown Cannon III
Bed down at the art-filled Wort Hotel
Make it a weekend: The Wort Hotel (pronounced “Wirt” in Jacksonese) opened downtown in 1941 when the streets were still dirt. The hotel’s exterior hasn’t changed, but inside is another story: They’ve added fancy Italian linens, permanent and rotating art collections of nearly 200 pieces by Western artists, and pillow-top mattresses. From $199; worthotel.com 3 more locals’ hangouts Sip: The best après-ski scene isn’t out at Jackson Hole Mountain Resort … or anywhere near the slopes. From 5 until 9 Tuesday to Saturday through ski season, Diehl Gallery shows off its international artists with wine and music. 155 W. Broadway; diehlgallery.com   Shop: When locals feel like something fancier than Mountain Khakis, they shop at Terra for skinny jeans, printed cashmere, Tucker tops and skirts, and airy silks from Calypso alongside Robert Graham and B.D. Baggies items for men. It even keeps little Jacksonites styling with Under the Nile organic robes, rompers, and teething toys. 105 E. Broadway; 307/734-0067. Eat: Blu Kitchen, the sexiest of Jackson’s upscale restaurants, assumes diners arrive with a healthy appetite. There’s no other way to eat the B-K organic burger—grass-fed beef topped with roasted pork belly and double-cream brie on a ciabatta bun—than with a knife and fork. $$$$; 155 N. Glenwood St.; 307/734-1633.