Popping Up a Business | Guest Post by Rachel Hofstetter

Here in the West, artisanal food is (forgive us) our jam. We asked Rachel, who chronicles the stories behind some of our favorite homegrown food companies in her new book, Cooking Up a Business, to share the story behind Quinn, our new microwave popcorn obsession. 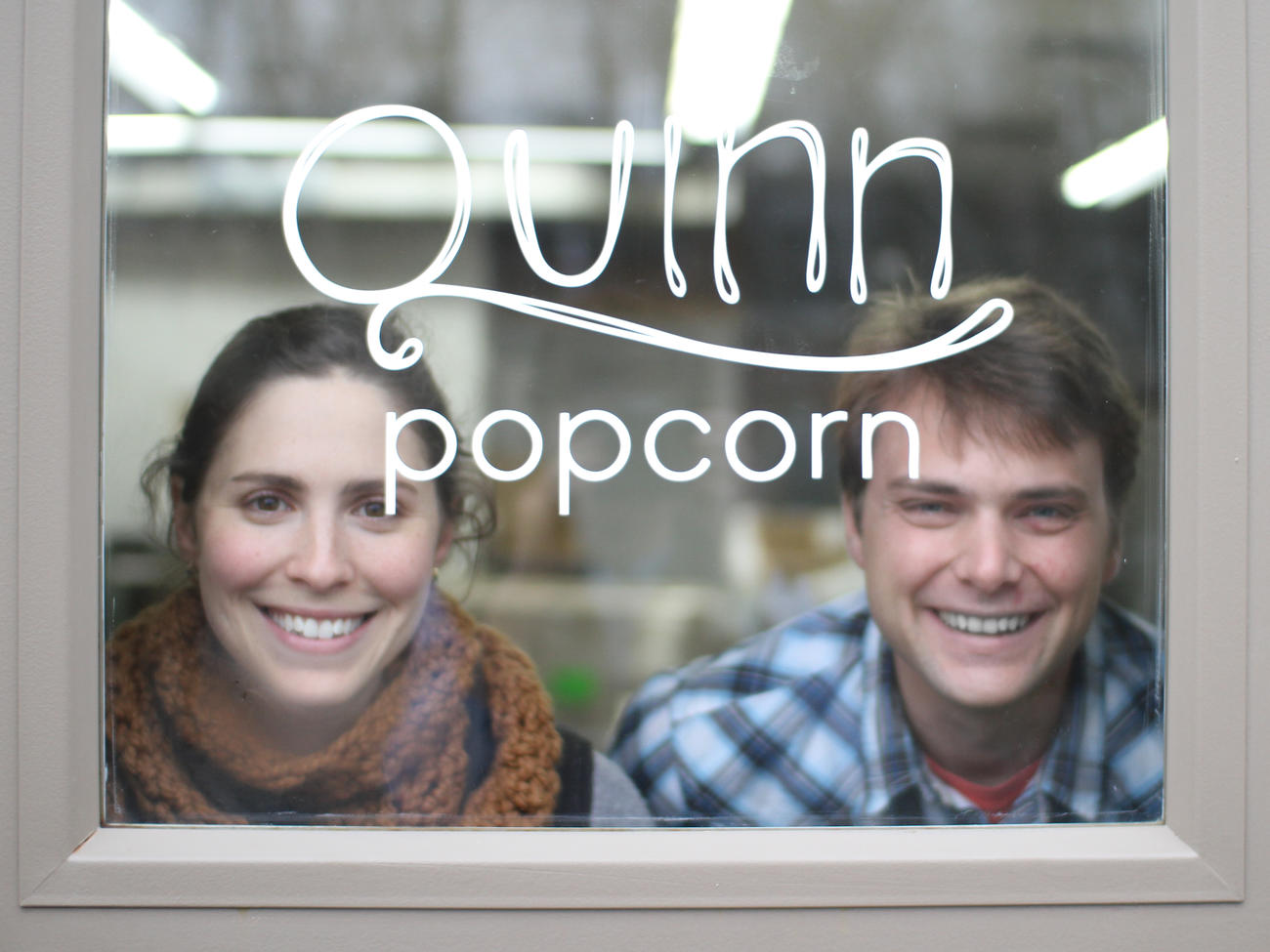 Here in the West, artisanal food is (forgive us) our jam. Rachel chronicles the stories behind some of our favorite homegrown food companies in her new book, Cooking Up a Business, plus offers practical advice for starting your own food-centric business. We asked her to share the story behind Quinn, our new microwave popcorn obsession, because they’re moving west this month to what Rachel calls “the epicenter of the natural food business movement,” Boulder. Welcome, Quinn! (And thanks to Rachel for this post.)

When I started scouting for the best food entrepreneurs to feature in my book, Cooking Up a Business, I immediately knew I wanted to talk to the intrepid founders of Quinn Popcorn, Kristy and Coulter Lewis. They had just launched their company on Kickstarter, which was, at the time, a relatively new phenomenon. Two years later, their company is growing rapidly—and this month, they head west from their Massachusetts home to join the natural foods community in Boulder, Colorado. Here’s their story:

In December 2010, Kristy and Coulter Lewis came home from the hospital with their first child, Quinn, and immediately jumped into . . . Quinn Popcorn. Kristy’s three-month maternity leave was a chance to run with their idea of making an all-natural microwave popcorn, one without the chemical-coated bags conventional versions rely on. Their goal was to see if this popcorn business was worth pursuing full-time, so Kristy spent her child’s first ninety days constantly on the phone and computer. “Luckily, Quinn was the best baby ever, so I could do that,” she says. “If he hadn’t been so well behaved, there wouldn’t be any Quinn Popcorn!” adds Coulter. 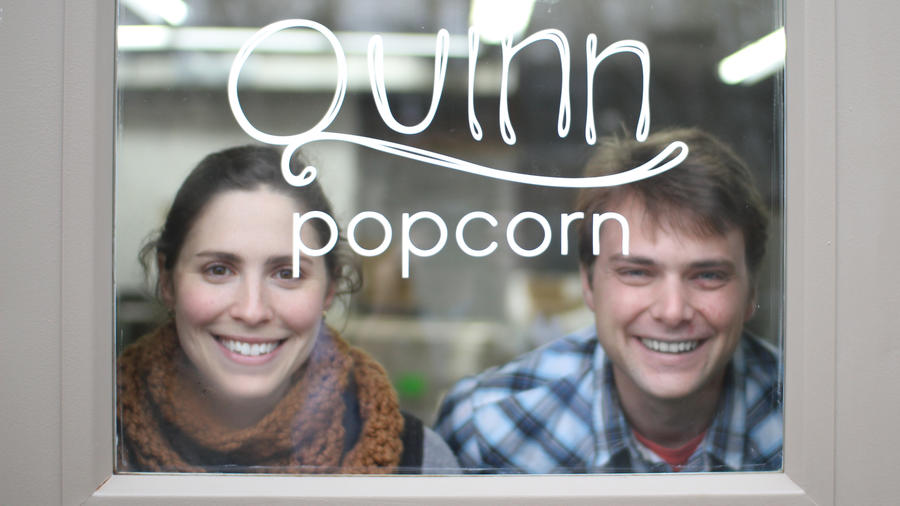 As the end of her leave neared, Kristy and Coulter took a good look at what she’d found: A product and technique that worked and the beginnings of relationships with the right suppliers. It was enough to make them think that maybe, just maybe, this could happen. So Kristy called up her boss, told him about the popcorn project, and went out on her own. From then on, it was nonstop Double Quinn: As Kristy discussed logistics with suppliers, manufacturers, and designers, she’d tuck baby Quinn in his stroller and take long walks, dialing away. Within a few months, they had boxes full of their new microwave popcorn and huge, looming bills from their vendors.

Coulter and Kristy had spent a significant amount of their savings on the popcorn project. When asked how much, Coulter jokes, “All of it.” Their grand total came to about $30,000. But now they needed more than money—they also needed to get the word out about a company that was, until this point, completely secret. The couple knew about Kickstarter.com and were active participants, donating to a variety of projects from a musical group to a guy who made cast iron cookware. That’s why Kickstarter is so magical: “People want to help out,” explains Coulter. Kristy and Coulter set their fundraising goal for $10,000 and went live. “It was terrifying,” remembers Coulter. “We had no idea how it would go. Thirty seconds after we pressed submit, we were wishing we’d set our goal for $2,000.” (On Kickstarter, you get the pledged money only if you reach or exceed the goal you set at the beginning.) 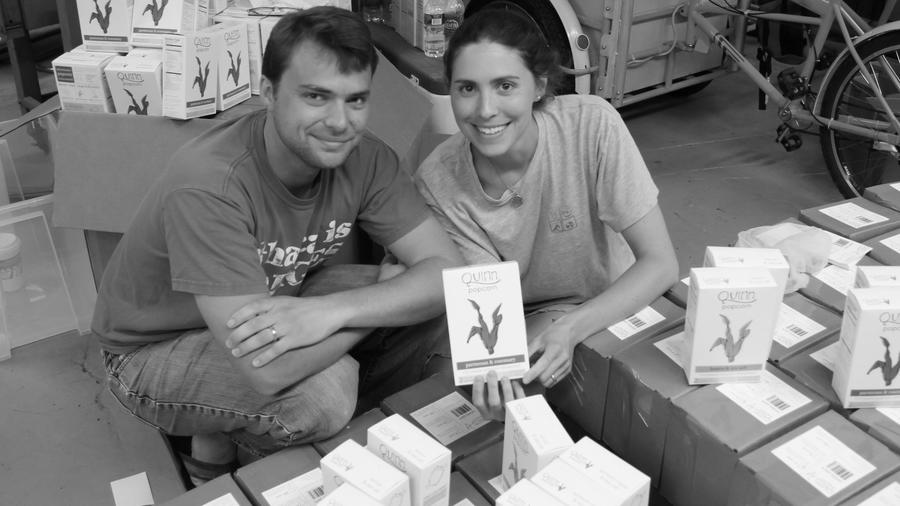 Kristy looked at her phone the second she woke up the next morning and thought there had been a glitch with Kickstarter. Had they really made $1,000 overnight? They were ecstatic and amazed, and their euphoria only increased during the thirty days the campaign was live. “The feedback we got was off the charts, and it wasn’t simply from friends or family; we didn’t tell anyone we knew until a few days in because we were worried our campaign would be a bust,” says Coulter. But because of that, they also found that Kickstarter brings its own audience. In the end, Quinn Popcorn had 755 backers who collectively donated $30,000. They’d also received an abundance of press and recognition. Thanks to their phenomenal success on Kickstarter, they were able to expand just as Quinn’s— both the boy and the popcorn—first birthday rolled around. And now? This fast-track company and couple is moving from Massachusetts to Boulder, Colorado, the de facto capital of the natural foods world, to grow bigger and better.

Rachel Hofstetter (@rachelhoffy) is the author of the new, go-to guide to food entrepreneurship “Cooking Up a Business.” The former food editor at O, the Oprah Magazine and Reader’s Digest was so inspired by the entrepreneurs she wrote about that she started her own company, guesterly, where users can create custom playbills for any event.

Popping Up a Business | Guest Post by Rachel Hofstetter