How can you have the West’s most crowded desert landscapes to yourself? Hint: Chill out 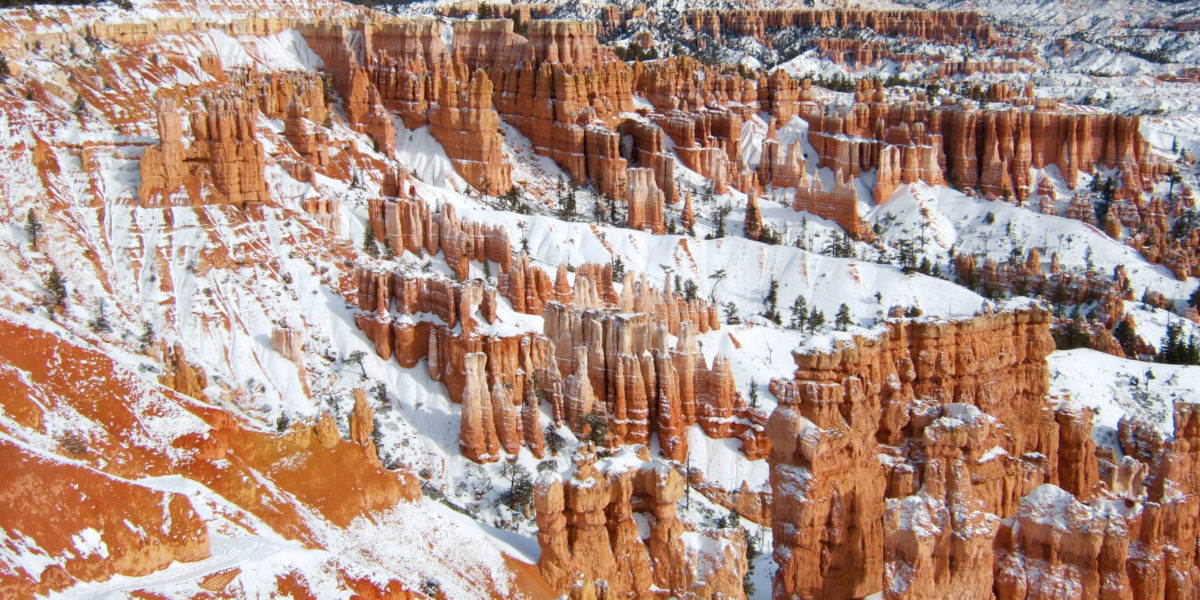 The last time I visited Zion National Park, the most popular of Utah’s slickrock fantasylands, it was the bright hot middle of July, peak season for the landmark. I quickly found out that its eye-popping natural splendor can be hard to appreciate when you’re being swamped by a flash flood of speedo-clad European tourists. “Ansel Adams never photographed that,” my girlfriend Sophia said, nodding to the mob filling the sheer-walled canyon of the Virgin River. “No,” I replied, “and John Muir didn’t wear it, either.”

Increasingly, it’s difficult to turn a blind eye to the overcrowding of the West’s cherished parks. Zion welcomed a whopping 4.5 million visitors in 2017, an increase of 200,000 from the previous year. This is surely cause for celebration—folks are getting out, touching dirt, smelling sage, howling with coyotes, temporarily abandoning their digital obsessions and whatnot. But there’s also cause for concern. While the wilderness will certainly survive (it always does), the experience of wilderness, of wildness—the powerful awe associated with capital-N Nature—may not. Loved to death, as the saying goes.

There is a solution to what I’ve dubbed “The Speedo Problem,” though. The sure ticket to humming silence and spine-tingling serenity even in our busiest desert parks? Off-season. Short crisp days and long starry nights. Cottonwood trees standing like elegant skeletons in sandy arroyos. In a word: Winter.

I first toured Capitol Reef National Park—Zion’s somewhat less-traveled sibling—and the surrounding uber-rural Wayne County a decade ago, during October. There were no stoplights, cell service was iffy, and I saw far more rock formations than humans. Following a wonderfully lonely 48-hour backpacking trip through the sinuous slots of the Waterpocket Fold, I found myself in the gateway town of Torrey, leaning over a cup of steaming coffee, chatting with the café’s proprietor-waitress. “Good thing you came in today,” she informed me, “because everything shuts down tomorrow.” As in, like, everything? “Well, the park keeps running, but it’s pretty darn sleepy until April. Our nearest supermarket is in Loa, 20 miles from here. That drive can take an hour when the blizzards are bad.”

Ever since I’ve been a devotee of Utah’s national parks during their coldest, sparest months. Sure, some of the joy lies in evading the sweaty hordes (Capitol Reef saw around 15,500 visitors in January of 2018, versus almost 150,000 in June of the same year). But the real reward is the altered landscape itself, the ice-fringed potholes and ancient pictographs silvered by frost. Imagine a snow globe scene, with prickly pear cactuses and bighorn rams substituted for Christmas trees and reindeer.

Toward the tail end of this past winter, craving Utah’s least-utilized season in one of its least-visited national parks, I returned to Capitol Reef. In addition to the tent, sleeping bag, portable propane stove, mac ‘n’ cheese fixings, and sixer of Old Chub Scotch Ale (Mormon country is rough on beer drinkers), I brought Sophia. Reared in balmy Tennessee, she refers to herself as a “snow dummy” instead of a “snow bunny,” but what she lacks in arctic hardiness she makes up for in devotion to seeing the wilderness in all its various forms. After a couple chilly nights of car camping, I assured her, we’d treat ourselves to a prolonged hot tub session at a nearby resort. “Bathing suits,” she said. “Thick socks,” I replied. We threw both in our duffels, agreeing that it was the interplay—cold begetting heat and heat begetting cold—that yields the greatest pleasure.

Capitol Reef’s website warns that the park’s core campground often reaches capacity early, but arriving after dark, only 7 of the 91 sites were occupied, each marked by a flickering bonfire—or, in the case of three RVs, flickering televisions. And get this: The firewood was free, left out in a pile by the park rangers, pinned with a note instructing us to help ourselves.

Dinner was a picnic-table buffet amid moonlit towers and their shadows, our backs to the pulsing firepit. After that, there wasn’t much to do besides read books and cuddle in the tent.

The next morning, energized by a breakfast of granola, instant joe, and mule deer sightings, Sophia and I set off on a quest for that iconic juxtaposition, holiest of holy Utah grails: snowy sandstone. It had been a mild winter, though, and this particular week was melty—nighttime lows in the 20s, daytime highs in the 60s. Accordingly, the landscape was colored mauve, salmon, apricot, and taupe. Locating a lingering patch of white was going to be difficult. That afternoon, we inspected every tight nook of a trailless gulch called Burro Wash until—success! I grabbed a fistful of powder from a shadowed snowbank and lobbed it in Sophia’s direction. Lucky for me, she decided not to escalate things into a full-blow snowball fight; still, our childlike glee at our find echoed through the canyon.

In summer, I’m constantly on the hunt for scampering lizards and flowering yuccas—for life. But this time, we found ourselves attuned to the abiotic: the micro-texture of petrified dunes, the shifting geometry of reflected light, the choral moan of a rising wind. Famously pared down to begin with, the desert is virtually ascetic between December and March. “Almost like an art museum,” Sophia said. “The way blank walls make the pieces really pop.”

Shelter from the Storm

Snow scene in the bag, we hightailed it for the homey refuge of a cabin at the Capitol Reef Resort: Elk-antler chandelier overhead, faux bear-fur blanket heavy across our laps, and ample views of red cliffs. As the gusts outside became howlers, and the howlers became sideways blasts, we toasted our perfect meteorological timing with the remaining cans of Old Chub. The cabin creaked. The heater cranked. Late that night I drew the curtains back to check the storm’s progress, and saw that two inches of fluff had accumulated on the porch. 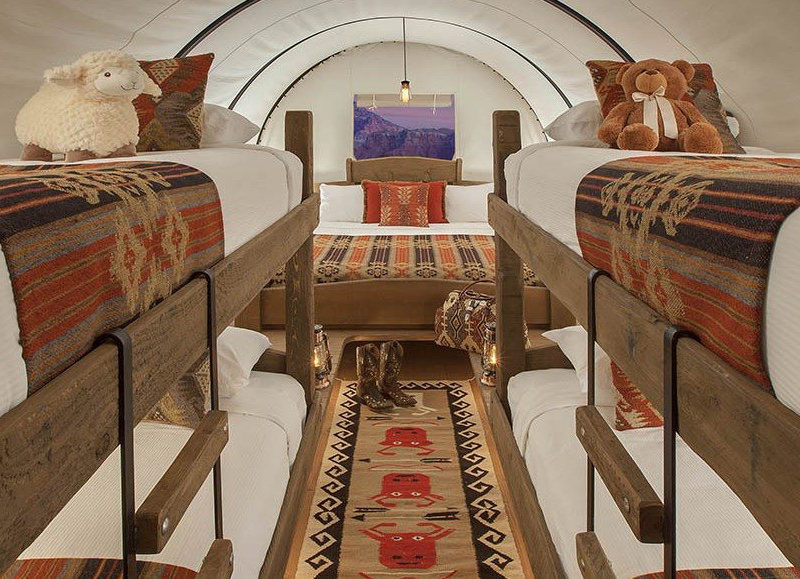 Outside, the patio hot tub was ours and ours alone. More importantly, so was the view. Sophia and I sat there, chin-deep, staring. If we can force ourselves into boots and jackets, I thought, every uncountable inch of this scene is open to us, waiting to be explored.

But first, another few minutes of warm water. And maybe a few more after that.

The wintry desert cuts both ways—cold beauty, sure, but also plunging temps that can easily suck all the charm from an outing if you’re not prepared. With the right gear, though, you’ll be calm and collected, not just cool.

All Day (and Night) Shell

The right puffy coat can be like having a sleeping bag wrapped around you wherever you go. And at night, in the tent, it makes for a sweet pillow—or you can stuff it down at the foot of your sleeping bag for a toe-warmer (just avoid one designed for Arctic-grade winters, because you’ll overheat while carrying a backpack uphill). The best bet is a midweight model worn in combination with base layers. The new Eddie Bauer MicroTherm 2.0 Stormdown Jacket ($229; eddiebauer.com) is trim and stylish, packed with humane-certified down insulation.

When you’re out in the elements, with miles yet to explore, nothing boosts morale like a sip of something hot. Tea is classic. Mulligan stew or chicken noodle soup is even better. An insulated food container (essentially a thermos for your lunch) like the Hydro Flask Food Flask ($30 for the 12 oz.; hydroflask.com) can be a bit heavy in the pack, but heck—you’re going to lessen the load with a noon picnic soon enough.

The fibers of Alpaca wool, a South American camelid, are completely hollow, and thus warmer and lighter than Merino sheep’s wool. Plus, they give cashmere a run for its money in the silky-soft department. Start with the Maximum Warmth Alpaca Socks from Alpacas of Montana ($33; alpacasofmontana.com).

Never, repeat never, plop your fanny down directly on a frigid rock. Rocks seem passive, but they’re out to steal every last calorie of warmth you’ve got. A camp chair that can be easily strapped to a backpack not only increases comfort, but also encourages lingering at those epic vistas. The one-pound Helinox Chair Zero ($120; helinoxstore.com) is the current trendsetter.

Sure, you have a sleeping bag, but a blanket is more convenient when you’re sitting fireside. For a wrap that’s achingly soft and lovely enough to drape over a couch when you get back home, we like the new Snow Peak Pendleton Wool Blanket ($265; snowpeak.com), a bold earth-tone collaboration between two brands at the top of their game.

By the Numbers: Monthly Visitors