Show and Tell in Legoland 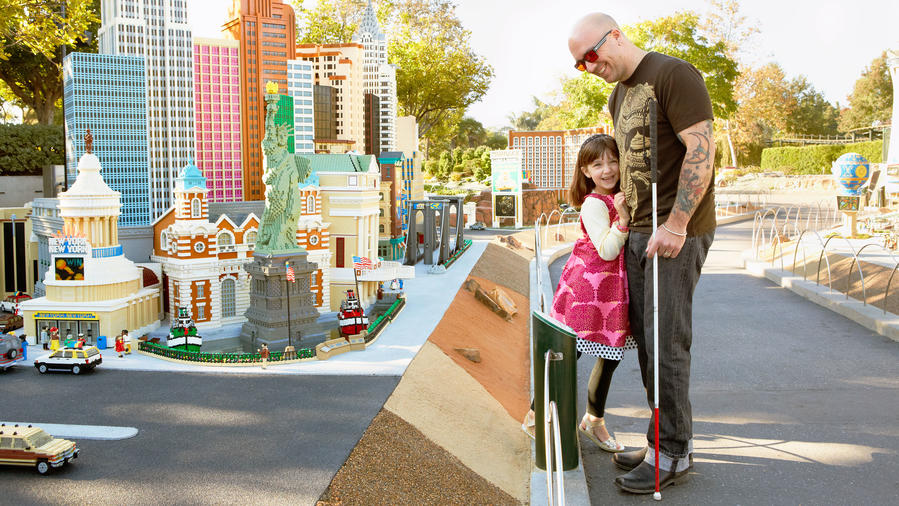 Amanda Friedman
"Let me show you, Papa." Tess guides her dad through a world of Legos.

At the California theme park, a blind dad and his 6-year-old daughter build memories, one brick at a time.

I lost my sight nearly 20 years ago, yet some challenges never seem to get easier, particularly as a father. Consider how difficult it is to play. You wouldn’t want me riding bikes with Tess, my 6-year-old daughter. We don’t play catch, either. Draw pictures? Her artistic ability surpassed mine the moment she could pen a circle. And though I’m a writer, I can’t read to her.

What we can do, however, is play Legos. In our house, Legos are a touchy-feely, equal-opportunity toy. Close your eyes. Give it a whirl.

Hundreds of billions of Lego’s modular plastic bricks have been manufactured since 1947. A Danish invention, Legos are—by sales and ubiquity—the most successful toy in the world. They are also the premise of their own amusement park franchise, with a Legoland in Carlsbad, California, 40 minutes north of San Diego, and a four-hour flight from our home in Vancouver, British Columbia. Here Tess could explore a toy that is the mutual stuff of our childhoods. She’d just have to tell me what it looked like. And where to go. And when to stop.

“Can you see the reception desk?” I asked as we entered the hotel.

“What’s a reception desk?” she said.

“It’s where the hotel people check us in.”

Handing the power of navigation over to a 6-year-old is labor-intensive. When we travel, she fills in the details of the world around me, and then I feel like I live inside her picture. It’s a unique intimacy, but given the vocabulary and attention span of a child, it can be frustrating for both of us. Often I have been in “a place” where I am surrounded by, you know, just “stuff.”

Here in the hotel’s lobby, Tess was already describing a world of strange sights. Children waded in a pool of Lego blocks. Some kids climbed the Lego castle, while others scrambled through a pirate ship festooned with manic toddlers.

“Hello, my little friends,” a voice boomed. “Have you seen my horse?”

A Lego knight had come to life in front of us, animated by a large man inside a costume. Children screamed in terror and booked it for safety.

Luggage in tow, we found our way into the elevator, and the moment the doors shut, the hotel’s music system cut out, a disco ball spun, and ABBA belted out eight bars of “Dancing Queen.” For three floors Tess and I rode in a private dance party. Then, right before the doors opened again, the music faded and the soft bossa nova of “The Girl from Ipanema” resumed.

There was a glue holding all of this together: In every corner, a new surprise with endless possibility. Our hotel room had a treasure chest that could be unlocked by a code hidden in clues around the room. The floor in the hall had a whoopee cushion built into it. Pounce just right and a voice cries, “Oh! You stinky pig!”

The next day we tackled the 128-acre amusement park, bracing ourselves for the fun and inevitable taxation. What did I expect? The usual. Bare concrete, blazing sun, competing pop songs deafening us from every ride, endless lines, and of course over-sugared, crying children. What did we find? None of it.

Amanda Friedman
All 27,000 of the Park’s sculptures are made by hand with Legos you can buy.

Legoland is actually designed more in the spirit of a zoo or city green space. Pathways tempt you in every direction. I could feel the gentle slopes of hills and the dappled light of generous tree canopies. Bridges stitch over creeks. One of those bridges, activated by a pressure switch as we crossed, made spooky, creaking sounds as if about to collapse underfoot. Sure, the jungle-themed roller coaster had a robust queue of kids, but waiting was often integrated into the fun of a ride, if not essential to it. For instance, a boat carried Tess and me around a waterway to fire our ship’s squirt guns at all the people waiting in line. But they had their own water cannons mounted on the fence. Their retort was full and wet. Tess told me when to fire. What she didn’t tell me was when to duck.

As we wandered the park, a map bloomed in my mind. This happens wherever I go: My feet trace a shape and that shape becomes a picture that I hold up to the world. Legoland was a pinwheel. Each spoke held a theme, be it castles and princesses, or pirates and ships, or animals and jungle adventure. As we walked clockwise from the gate, the rides grew in sophistication. First, a Duplo Village for the toddlers; then, Lego cars kids could drive around a little city to earn their Lego driver’s license. (Tess refused to let me go for mine.) By the completion of the pinwheel, you could be seated in something as extreme as the Knights’ Tournament, a ride in which two people are strapped into the clawed hand of a giant knight and shaken stupid.

“Why am I standing in sand?” I asked Tess at one point in the afternoon.

“Because you have to dig, Papa.”

I was confused. We were standing ankle-deep in Tess’s favorite ride, which wasn’t really a ride at all.

“I found a foot,” she shouted. “For real. A real dinosaur foot!”

We were excavating in a pit that concealed three concrete dinosaur skeletons. For the next half-hour we shoveled and brushed, following the leg up to the head and over to the tail. If travel is about making memories, Tess and I had just uncovered one together. She was so happy and astonished. So was I. The design of this park understood something elemental about kids and fun. No pandering. No condescension. Whatever it is, a ride or a hotel room or even a footbridge, you have to make room for imagination.

Tess continued to scoop and brush. Me too. It was something we could do together, a rarity in this world. As my hand felt around for the dinosaur’s skull, something flashed. A memory. I am pretending to dig for dinosaurs on a beach near my home when I was Tess’s age. I’m holding a big plastic bucket, the same kind in which we keep our Legos. My brothers and I would fight over that bucket, each of us trying to lay claim to the best pieces buried in the jumble. All those blocks of brilliant color—colors I haven’t seen in 20 years. Now here I was doing these same things with my daughter. Digging sand. Playing Legos. It’s as if we want to rebuild our childhood for our kids and hand it to them: “Here. Do it like this.”

We strolled a path, munching fried apple slices dipped in whipped cream, until we reached the center of the pinwheel. There stood models of American cities. The New York skyline. New Orleans. The Las Vegas Strip. All were built to scale, and all to the level of detail that even the rooftops, which nobody can see, sport replicas of the air-conditioning units found on the actual buildings. The park let Tess and me hop the fence and wander among the cityscapes. She put my hand on tiny buses and trees, swiped them over a “lion”—which was, in fact, a sphinx. To touch these models felt like I was holding a pixel­ated world. Some 27,000 sculptures adorn the park, using more than 60 million Legos. Each one is assembled and maintained by hand. Nothing has been custom-made for the park; they only use what is commercially available. Theoretically, anybody can build whatever they see in Legoland.

Tess and I made our way back to dig for more dinosaur bones. But a few scoops in, she said the one phrase that alarms me as a blind parent, no matter where we are.

I stared out at the big 128-acre blur of nothing in front of me.

Her voice had a familiar quiver in it. She was already frustrated by my inability to do what she needed the moment she needed it. Often it’s fun to be in charge, taking the lead, when you’re 6. Then, at a moment like this, I can feel Tess’s burden. For real.

I grabbed her hand and let Tess kite me about the park, my 6-year-old frantically trying to intuit a way to the restroom. We swerved and angled as people pointed her up this path and that, past flying helicopters and a fountain that made music. I could sense her urgency brimming. She clipped me against benches and other children, until we suddenly stopped. Was it too late?

She had meandered us into the line for the Coastersaurus. Its call had overtaken nature’s.

Back in our room that night, Tess unlocked the treasure chest. Inside was something to build. A leafy tree. To think, Legoland and all our play over the years comes from something so small. Just a brick. One at a time, until here we are, a father and daughter playing side by side.

Tess opened the directions and asked for help. This is where our childhoods, and our Legos, differ. She only wants to build what the directions say. I don’t. I can’t. So instead of the tree, I rigged together an octopus. Tess immediately took it apart.

And once again, as always, I followed her lead.