How one baby-boom skier became a snowboarding convert 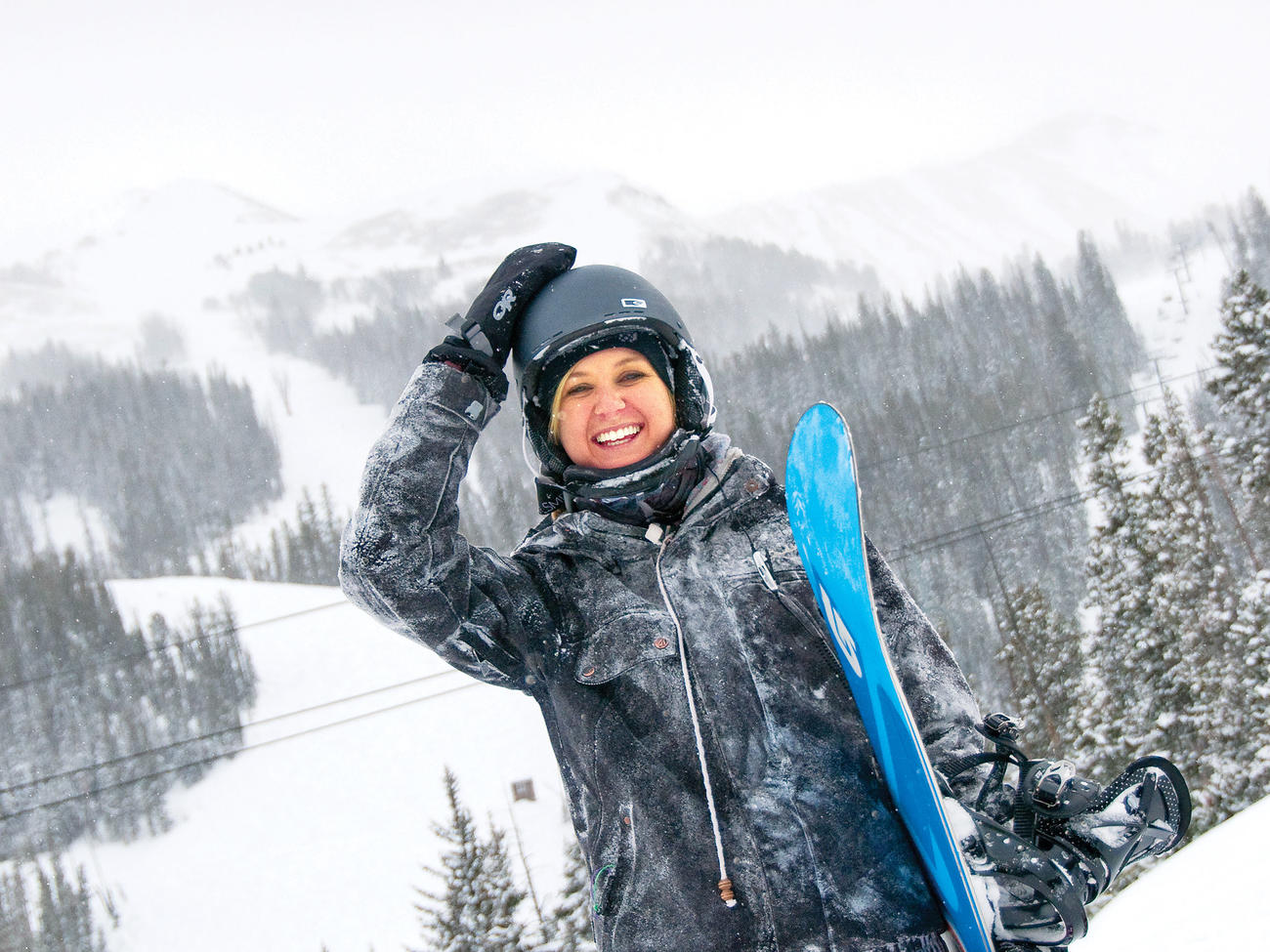 For most of my life, snow meant one thing: get out the skis and go. Downhill or nordic-style, they were all I needed to take on the white stuff of winter.

But now I’ve added new spice to my ski rack ― a snowboard. Egged on by my two preteen kids, and encouraged by the increasing number of other “grays on trays”―snowboarder argot for the sport’s, um, more mature participants―I decided to forgo a weekend of skiing and give snowboarding a try.

Two days later I was hooked. Boarding, or “riding” as it is often called, already had me gliding down the mountain in wide,arcing turns and skimming down newly groomed intermediate trails. If I had been a beginner skier with so little time on the mountain, I’d still be belly-flopping off the rope tow.

I’m not alone in my affection for snowboarding. According to DanKasen, the National Sporting Goods Association’s manager ofinformation services, “Of the 27 year-round sports we follow, it was by far the fastest-growing sport last year.” At resorts nationwide, roughly one in four people rides boards, not skis. At some areas, boarders outnumber skiers―at Mountain High, near Los Angeles, it’s 85 percent snowboarders, notes MichaelBerry, president of the National Ski Areas Association. Only a handful of resorts―Taos in New Mexico and Deer Valley and Alta in Utah―still eschew snowboards completely.

Snowboarding was once the territory of kids with barbed-wire tattoos, but the number of older enthusiasts has inched up: from 350,000 35- to 64-year-olds in 1988 (when NSGA first compiled snowboarding figures) to just more than 500,000 baby-boom-and-beyond riders this past year. While some of these riders may be searching for the rebel within, many now ride because it’s gentler on their worn-out knees.

Explains Terrence Orr, M.D., an orthopedist based in South Lake Tahoe, California, “Because both legs are attached to the same platform in the same direction, you don’t have the problem of one leg going in one direction and the other shooting off in another, like you do with skiing. It’s much easier on the knees.”

That sounded good to me as I took my son, Sam (age 10), and daughter, Hannah (age 8), to Kirkwood Mountain Resort, south of Lake Tahoe, for our snowboarding debut. We arrived with our own helmets and wrist guards. But as novices we opted to rent boardsand boots.

“What foot do you use to kick a ball?” asked the attendant as he fitted us. “If you kick it with your right, you’re goofy. If you use your left, you’re regular.”

Mock kicking ensued―Hannah and I were regular, Sam goofy. That “kicking” foot, the dominant one, would go in the front binding plate, a disk of metal that clamped the boot onto the board. The rear boot clicked into a separate binding behind it, a shoulder-width apart.

Fully outfitted, we exchanged bulky hugs and headed out to our respective adults’ and children’s classes. My instructor, Dustin, led my class over to a gentle hillock.

Getting the hang of it

We moved onto our boards. Dustin showed us how to clip in and out of our bindings―simple enough. “Okay, Harriot,” he announced, “point your board down the hill and go.” Without benefit of poles or much of a slope, I waggled my arms back and forth to get going. “Stand up, lean downhill, weight forward, and point where you want to go,” he hollered, so I stood up, tucked my hips under, leaned, pointed, and inched down at a soundbarrier-shattering 1 mile per hour.

“Great,” Dustin said brightly. “Next!” Everyone took turns, trudging up and trying it again. We attempted turning, rocking our feet back and forth, controlling direction with gentle pressure on our heels or toes. Dustin coached us on the basics of fallin―try to fall backward, he advised, “where there’s padding,”and if we did fall forward, cross our arms to protect our wrists.

A few more runs, and I got the hang of it, linking lazy turns. I found getting up the hardest, and understood why boarders spend so much time on the ground–getting up is tiring. Then it was time for a challenge, so we headed for the bunny-slope lift. At the top, what seemed laughable on skis all of a sudden looked alarmingly like Everest. I forgot everything.

“Okay, Harriot, go!” Dustin called. I waggled, I pointed, I budged. Turn right, press into heels, avoid that tree, lean forward, breathe, rock onto the toes, that’s it, another turn. I wasn’t Olympics material, but I was boarding.

After lunch, I met up with Sam and Hannah, who were brimming with excitement. They’d made it too. We decided to try the slope on our own, the kids sharing the tips they’d learned (“Stand like you’re a cowboy about to draw your six-shooter”). We crashed, but we were up more than down.

The next morning we met our private instructor, New Zealand-born Mark Inglis, all white teeth and ski tan. “Let’s work on the fineries,” he suggested, moving up to an intermediate trail. The lesson went by astonishingly quickly, followed by more runs on our own. It was time to head home.

Not long after, we made a family trip to Mount Rose Ski Resort, near Reno, Nevada. We opted for boarding again. Sam disappeared, saying something about halfpipes and tail grabs. Hannah took off into a fairyland of snowy pines. I stood alone, staring down,having once again forgotten everything. Okay, I thought, judgment day.

One deep breath and I pointed, waggled my arms, and started to fly. I think they could see my smile all the way down in Reno.

THE GEAR The following items should be available at sporting goods stores or other outlets specializing in winter sports gear:

Board. Rent first; then, once you’re hooked, go for a flexible, beginner-friendly board, with an ample sidecutthe inward-curving waistline designed to carry you through smooth turns. When stood on end, the board should reach roughly to your nose. A good board should run $400 to $500.

Helmet. Surprisingly lightweight and comfortable, hard-plastic helmets made for snow sports should be on every head on the slopes―kids’ and adults’, skiers’ and boarders’ alike. $150 adult, $50 kid.

Wrist guard. An inexpensive protection against a leading snowboard injury: When you fall forward on a snowboard (as often happens to beginners), it can be a quick, hard slam. $15.

Clothing. The 18-year-old boarders still dress like Kurt Cobain: baggy pants, flapping plaid shirts. But clothing manufacturers are now catering to adults who want a cleaner look .Go for polypropylene underwear, which insulates and wicks away moisture, polypropylene-wool socks, waterproof mittens or gloves, a fleece vest or lightweight shirt, and a waterproof parka and waterproof pants.

Boots. Beginner boots are usually soft (hard-shell boots are for advanced boarders) and are made of nylon or other synthetics.They should be snug, not allowing a lot of foot movement inside. Again, rent first, then buy: boots should run about $125.