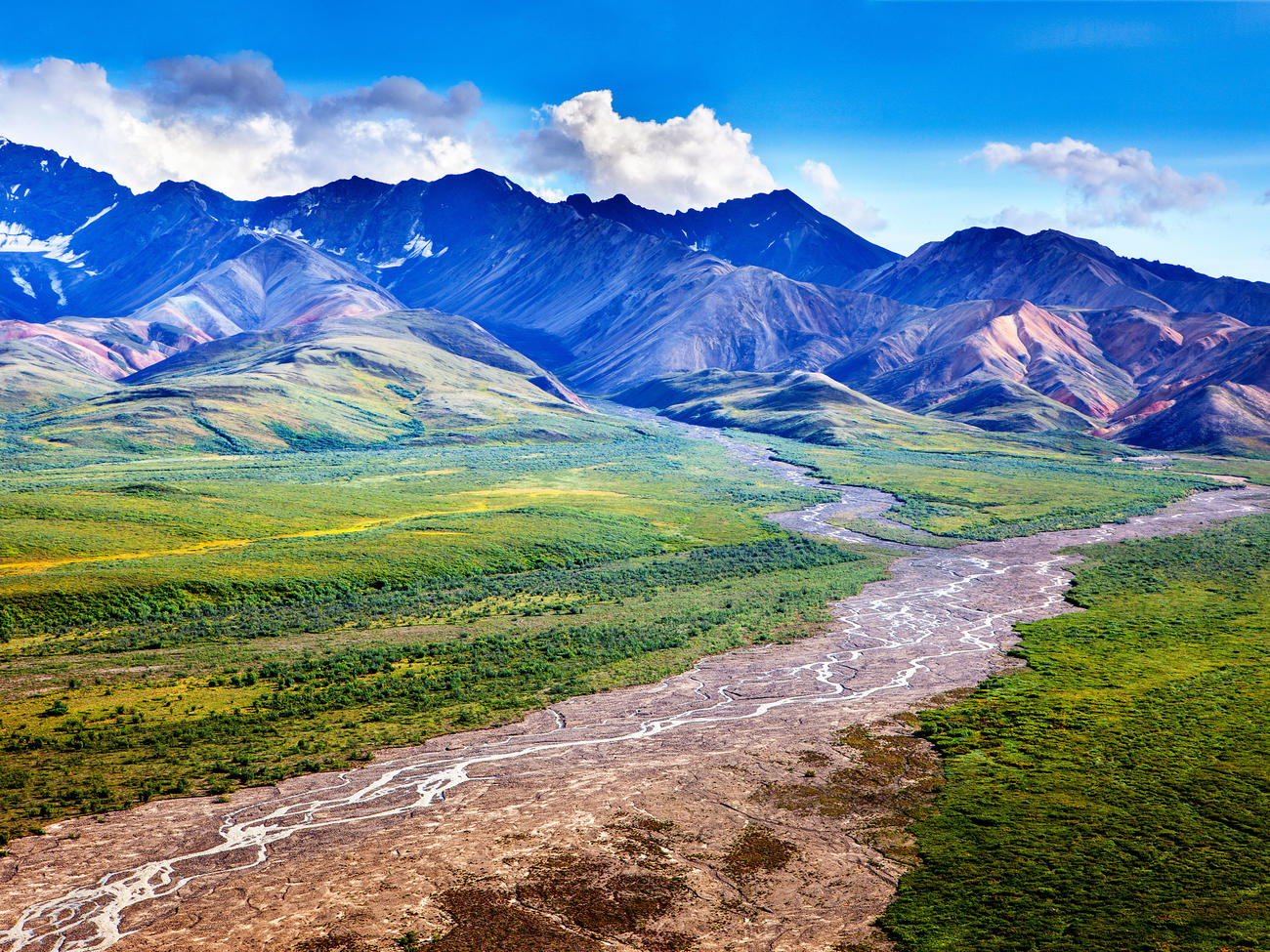 “If she’s going, we’re going,” Bojana informs me. As we gather our gear (hiking poles, mosquito head nets, rain jackets, fleece), I suggest that for the remainder of the trip, we should—per American custom—adopt trail names, and I suggest that hers be Little Griz, or Wolverine, reflecting her ferocious approach to most things in life (she has two master’s degrees, runs marathons, speaks four languages, is a gourmet cook, and reminds me often that if I applied myself, I might amount to something). She tells me I can call her Boo Boo, but only if I will answer to Yogi. She also informs me, when she sees me jotting down Cool Alaska Facts, that she will allow me to write about her “only if you refer to me as 100 pounds of pure spunk.”

On our first strenuous hike, we grunt (actually, only I grunt; 100 pounds of pure spunk just walks) up a hillside that looms above the cabins. With our naturalist guide, Shaleas, and 10 other brave souls, we slosh through mud, push aside dripping plants, and look out—eventually—over gasp-inducing vistas. We climb 2,000 feet in 3 miles, and every 100 yards or so, Shaleas stops us to explain something interesting about dwarf birch. I am having a hard time concentrating, though. There are the clouds of mosquitoes, for one thing, which swarm over us each time we stop. There is Pure Spunk, who after our third stop keeps climbing until Shaleas tells her she needs to stick with the group, at which point Bojana not-so-quietly whispers to me, “I thought this was the strenuous hike. The slowpokes should have stayed behind.” We gobble our sack lunches. We inspect flowers. Purple flowers. Yellow flowers. A shockingly pink woolly lousewort that makes our naturalist guide squeal with delight. Apparently, it’s rare. After our hike back and dinner where I tell some of the other hikers that I think I saw a grizzly bear stalking us near the ridge (I didn’t), Bojana and I sit on our humble little cabin’s porch, with our mosquito head nets, at 11 p.m., and regard the alpenglow on the broad, majestic face of The Weathermaker, which gloriously makes none during our visit. Except for Bojana’s 57 mosquito bites (I count), all is cool and serene. The next morning, I announce to my 100 pounds of pure spunk that today I want to encounter a herd of Dall sheep, the elusive and majestic northernmost wild sheep in North America. Over coffee, I inform Bojana that it was the pursuit of these sure-footed big-horned mammals that helped create Denali National Park. Another Cool Alaska Fact.

“Enough!” Bojana tells me, as we gather our hiking poles and rain gear and fancy camping binoculars. “No more Cool Alaska Facts today!”

It is another Strenuous Hike Day, and this time a dozen of us take the camp bus with our guide, Drew, and as we cruise past the Muldrow Glacier we learn that it is capable of surging 1,000 feet in a day, on those rare times it surges (the last surge was 1957). We disembark from the bus at a place called Eielson Visitor Center and descend to a riverbed. Eagles fly above us, and a nonchalant caribou strolls within 25 feet.
Ian Shive
Caribou in the park.

Drew asks us how we’re all doing and we all yell, “Great!”—because with the sheer, clean immensity of the place in our souls, how could we be anything but great?

Then Drew points up the side of the mountain and tells us we’ll be stopping for lunch “up there.” I swear I hear Bojana emit a little yelp of joy. Finally, a hike strenuous enough for her. It is steep, and slippery in a few places, and the truth is, I might have stopped and pondered life at some point and informed Drew I would wait for him and the group to return, but the 81-year-old South African woman was climbing, so I persevered. The rest of the hike, no one talks much. Even when we see another caribou, we just smile. Alaska will do that, will render even the most predator-obsessed, Ursus Mark VII storytelling guy mute. We scan the skies for eagles, hold our breath as another caribou moseys by, listen in silence to a horned lark. We don’t see any Dall sheep, but I decide I don’t mind. After the silent, delighted hike back to the bus, Boo Boo and I, hot and sweaty and dirty, run screaming into a tiny pond near the dining lodge that leaves us both breathless. Then we shower and it’s time for another exuberantly fresh dinner. I mention to the teenage girls at our table that I’m pretty certain I saw a grizzly on our hike, and I thought from its odd gait that it might be a “rogue bear, which experienced backcountry folks know is as unpredictable and even more lethal than its already dangerous brothers and sisters.” None of this is true. Bojana kicks me under the table. On our daytime hikes and our evening talks and just poking around in the camp’s resource room, I keep quiet and let Cool Alaska Facts come to us through the mouths of our guides and the text of the displays, because Bojana has warned me.
Ian Shive
A grizzly mama and her cubs amble across a hillside.
We learn that Alaska forests are thicker near rivers partly because bears can stuff themselves full of fish at those rivers, and that consequently when they defecate in the woods, the fertilizer can be richer than the places where their less-well-fed cousins live. We learn that the cute little red squirrel, which we spot one afternoon perched in a tree softly chattering, feeds not only on spruce seeds and mushrooms but as a delicacy once a year also likes to kill and devour a bunch of baby snowshoe hares. As I jot down that disgusting but cool fact about the bloodthirsty little red squirrel, I cannot resist. “In many ways he is the embodiment of Alaska,” I inform my lovely but sometimes cranky girlfriend, as we hike next to a stream, surrounded by rolling hills and distant snow-topped peaks as far as the eye can see. “Beautiful and alluring, and yet ruled by impulses primitive and predatory. Magnificent, yet murderous. A treasure, and yet through no fault of his own, driven to terrible acts of vicious and …”

“Enough, Yogi!” Boo Boo commands, whacking me on the shin with one of her hiking poles.

At our final dinner, Bojana asks the staff if she can address the crowd. And that is the moment that 100 pounds of pure spunk melts into a soft little puddle of nature-loving sentiment. Bojana tells the staff and the other visitors that she has never felt so happy, so at peace, that she has never experienced anything in the United States quite like Alaska. She compliments the lodge on its flawless operation, and speaks movingly of the connections she built here. She says she will always carry a piece of Alaska in her heart.
Ian Shive
Bus ride to amazement: Denali has a single 92-mile road, much of it unpaved and most of it restricted to buses.

After three glorious (except, it must be said, for the ravenous mosquitoes) days and three eerily bright nights, we board the bus for the trip to Glitter Gulch, and then the train to Anchorage. I look out the windows at the absurdly gorgeous vistas. Being surrounded by killer moose and ferocious squirrels might seem a terrifying prospect, but after a few days in Alaska’s interior, in the shadow of The Weathermaker (especially when the weather is nice), a man can learn to live more comfortably with the universe’s annihilative possibilities. He can learn that to seek Strange Truth can be a good thing, but, as glorious as it is to witness Denali in its solar-spackled, Maximal Middle Linebacker of All Mountains glory, it’s not the witnessing that’s important, it’s the seeking. (Although I’m really glad I got to see The Mighty One.)

I make peace with the fact that I will probably never, ever, feel the cold embrace of the Ursus Mark VII or, unless my life evolves in a very different way, stand upon the rarefied snow at the peak of Denali. It’s okay. We can still look out windows at the tundra sliding by, the occasional moose, the beaver dams. It’s a big place. I’m a tiny speck of humanity. I surrender. It feels good.  SEEING DENALI The basics. Denali National Park and Preserve covers more than 6 million acres: tundra, glaciers, mountains, and lakes. Only a single road goes into the park, and it’s 92 miles long.  When to go. The park is open year-round; shoulder season (May or Sep) is the best time to visit; wildlife sightings remain about the same, but spring flowers and the tundra turning in late summer add dramatic color. Buses, the main public access into the park, run May 20 to the second Thursday after Labor Day. $10; nps.gov/dena.  Getting here. You can rent a car and drive to Denali from Anchorage (about five hours) or Fairbanks (about two hours). The Alaska Railroad stops at Denali daily in summer. The train has better scenery, including Hurricane Gulch, where the tracks seem to tightrope-walk over a canyon. Anchorage–Denali is $156 one way, or $241 in GoldStar service, which gets you upstairs with a much nicer view; Fairbanks–Denali is $68/$123. alaskarailroad.com. Seeing the park. Most of the park road can only be traveled by bus. The park has two kinds: Tour buses are more comfortable and offer narration, but only The Kantishna Experience bus gets you deep enough into the park to see the real glories; shuttle buses let you get on and off almost anywhere to hike and go as far as Kantishna. From there, Denali looks like a wall. Reservations for either kind of bus: reservedenali.com. Park lodging & food. One lodging option within the park is Camp Denali—where writer Steve Friedman stayed—located in a 67-acre private in-holding. Staying in a cabin here is like getting Alaska to yourself. Three nights, including all meals and transport in and out, runs $1,665/person. campdenali.com. The area around the park entrance is crowded with hotels and restaurants. Good lodging choices include Denali Cabins (from $142; alaskadenalitravel.com/cabins) or EarthSong Lodge (from $165; earthsonglodge.com).  For a nice dinner out, 229 Parks Restaurant and Tavern ($$$; 229parks.com) serves superior Alaskan cooking with fresh local ingredients. Or go for a classic: Denali Park Salmon Bake ($$$; Mile 238.5 Parks Hwy.; denaliparksalmonbake.com).  There are more choices in Talkeetna, 150 miles south of the park entrance. Here, Talkeetna Alaskan Lodge (from $285; talkeetnalodge.com) has big rooms and gorgeous views. And the caribou burgers are tasty at West Rib Pub & Grill, on Main Street ($; westribpub.info).  Guided hikes & flightseeing. Get up close to the landscape with Alaska Nature Guides, who lead walks in nearby Denali State Park and around Talkeetna. From $59; alaskanatureguides.com.  From Talkeetna, K2 Aviation offers flightseeing tours around Denali. The route follows Ruth Glacier to the rock spires of the Great Gorge; some tours fly around the peak of Denali itself. From $205; glacier landing adds $85; flyk2.com.
Ian Shive
Talkeetna Air Taxi on Kahiltna Glacier
From Camp Denali, Kantishna Air Taxi flies out from a landing strip deep in the park. Flightseeing $250; katair.com.