From refurbished beachfront hideaways to recently opened inns, these 8 hotels are well worth a check in. 1. Ojai Rancho Inn At ... 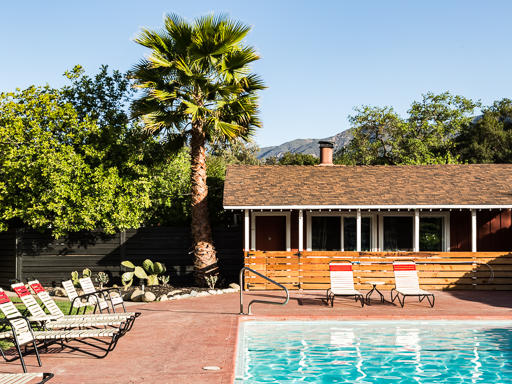 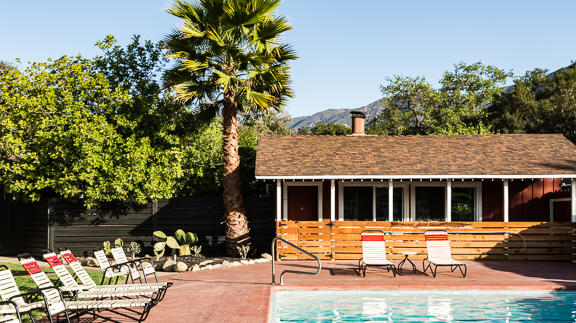 From refurbished beachfront hideaways to recently opened inns, these 8 hotels are well worth a check in.

1. Ojai Rancho InnAt the boutique Ojai Rancho Inn, in Ojai (615 W. Ojai Ave.), the charm is in the details, from the knotty-pine walls to the potted succulents and outdoor firepit. The 1950s motel was bought in 2012 by the same team behind Santa Barbara’s popular Sama Sama Kitchen. Since then, they’ve added desert-inspired local artwork and Linus bikes to borrow and built a new bar. The homey vibe remains. If an overnight is not enough, you can take a piece of the Rancho’s aesthetic home with you at the chic little lobby shop. From $129.

2. La ValenciaPerched high on La Jolla’s coastal bluffs, La Valencia (1132 Prospect St.) reigned as one of the chicest hotels in SoCal for much of its 88-year span. But time started to get the best of the property about a decade ago: Outdated carpeting plagued the once-hip rooms, and the lobby looked worn. Now, with a change in ownership and a $10 million renovation, La Valencia has traded its stuffy ways for the nonchalance of a Hollywood retreat, without a touch of pretension (you won’t find a single VIP cabana at its pool). Gone are the old wooden shutters and 8-foot-high hedges that kept the property feeling dark and unwelcoming. The exterior got a fresh coat of its signature (and still delightfully kitschy) cotton-candy pink paint, while all 112 rooms were modernized. The old Whaling Bar reopened as a French art deco-style bistro, called Café la Rue, which is decorated with vintage murals of France. From $305. 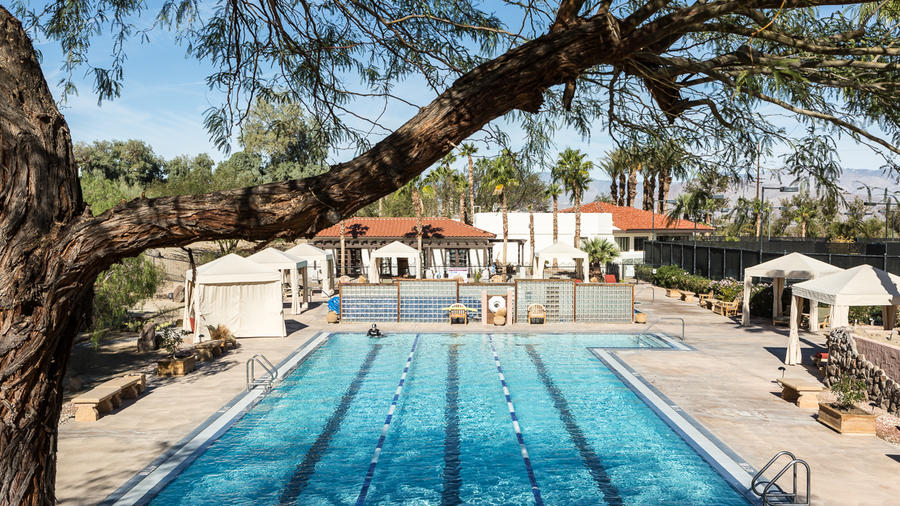 3. La Casa del Zorro Resort and SpaBorrego Springs regained a touch of Palm Springs glitz in 2013, thanks to the extensive remodel and reopening of the La Casa del Zorro Resort and Spa (3845 Yaqui Pass Rd.). The 48 luxury rooms and 19 private casitas of the 42-acre property—established in 1937 as the Desert Lodge—have been restored to their former glory, with wood-burning fireplaces and massive marble baths, plus access to two restaurants, six tennis courts, and five heated outdoor pools. Friday and Saturday nights, you can join locals and guests alike for no-cover poolside parties with live music—or snag a stool at the on-site Fox Den Bar and Cantina, just off the Desert Lodge’s preserved original entrance, now part of a micro museum of hotel artifacts. From $295.

4. Belmond El EncantoAfter nearly seven years of renovations, Santa Barbara’s landmark Belmond El Encanto (800 Alvarado Place) reopened in March 2013 and became, once again, a go-to spa-weekend getaway for chic Angelenos. The lobby and wine room got a facelift; original artworks by Damien Hirst and other A-listers were added; a saline pool—always kept at a balmy 86°—was installed; and a new spa with massage rooms, a nail studio, and hair salon was built. Now the 7-acre, 1918 property has a revamped restaurant to match, giving local Santa Barbarans plenty of reasons to visit too. In April of last year, chef Leo Andres Ayala took the helm and revamped the eatery’s menu, focusing on local seafood, farm-to-table produce, herbs grown in an on-site garden, and cheese made from the milk of Ellie, the resort’s cow. Opt for a white umbrella-shaded table on the terrace: You can see the Pacific below and the Santa Ynez Mountains above, and listen to the bells of the Old Mission Santa Barbara, less than a mile down the hill. From $525.

5. The GarlandSince 1972, local developer Fillmore Crank’s family has owned and operated a Spanish mission-style lodge in North Hollywood named after his late wife, Beverly Garland. Best known for her role on Scarecrow and Mrs. King, actress Garland also designed the hotel’s interiors. Now, after a $20 million renovation, which began in fall 2013, her original vision has been modernized. The result is The Garland (4222 Vineland Ave.), a 243-room inn with bright orange accents and a new restaurant, The Front Yard, which opens this month. The property’s Hollywood roots can be felt in the 1,800-square-foot theater available for rental and the complimentary trolley service to and from nearby Universal Studios. From $229. 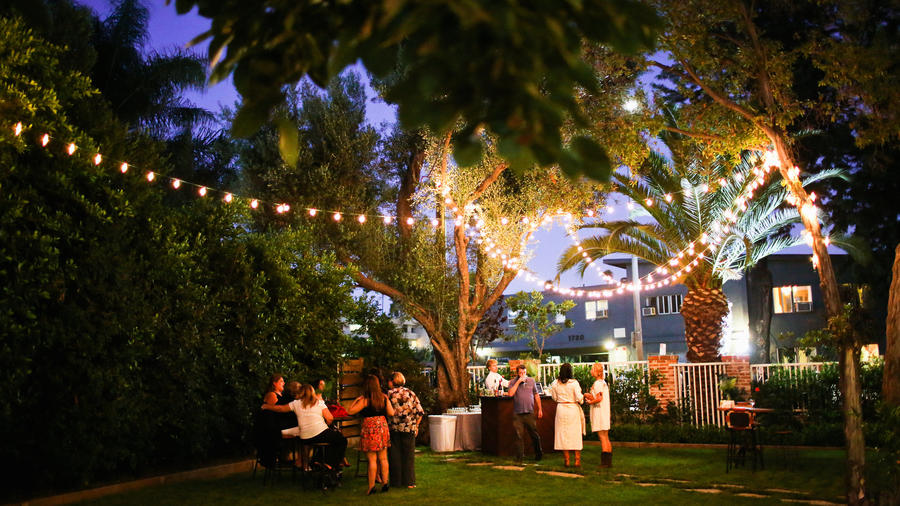 Lombardi House, in Hollywood, doubles as a boutique hotel and private-event space.
(Photo by Max Wanger.)

6. Lombardi HouseWhen real estate developer Jacques Massachi learned that the dilapidated 1904 Victorian farmhouse he’d just bought was, in fact, one of the oldest houses still standing in Hollywood, he scrapped his plans to tear it down—and decided to renovate it for the public instead. Age wasn’t the only factor. Lombardi House (1717 Bronson Ave.) is rich in Hollywood history too. Originally built as part of the horse ranch of U.S. Senator Cornelius Cole, it’s named after subsequent owners Philip and Sylvia Lombardi, retired vaudeville performers who purchased the home in the 1940s and loved to entertain on its forested half-acre grounds. After a six-year overhaul, Lombardi House reopened in 2014. The 7,000-square-foot property now functions as a 9-bedroom, 11-bathroom boutique hotel and event space. The rustic white-clapboard barn, with its 35-foot-high vaulted ceilings, is often strung with white lights and used as a party or wedding venue—no doubt the former vaudevillian owners would approve. From $450/suite; 2-night min. 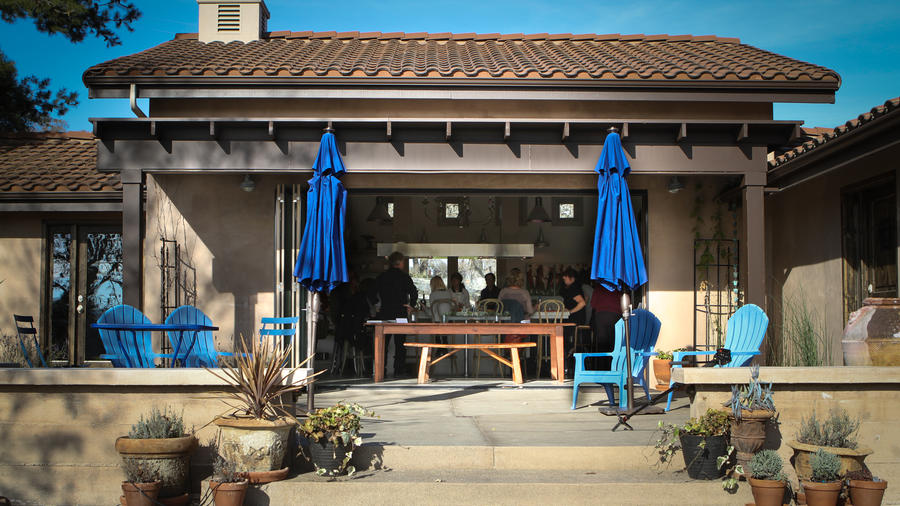 7. RefugioProlific cookbook author Brigit Binns—who wrote Sunset’s Eating Up the West Coast, just published in April—has collaborated with celebrity chefs on both coasts, including New York’s Michael Psilakis and L.A.’s Joachim Splichal. She taps into those culinary-industry connections for the intimate cooking classes she launched last year at Refugio (Barley Grain Rd.), her 5-acre property in the Paso Robles countryside. This month, heavy-hitters Evan Kleiman and Clark Staub will take over the spacious, sunny kitchen to teach their favorite subjects: For Kleiman, that’s making fresh fruit pie; for Staub, creating a meal from seasonal, local produce. Binns will instruct classes as well, including her popular Perfect Steak and Perfect Caesar class. If you’d like to make a wine-country weekend of it, you can book one of the pair of private one-bedroom suites on-site. From $300/suite.

Check out our new slideshow for more enticing hotel pics!